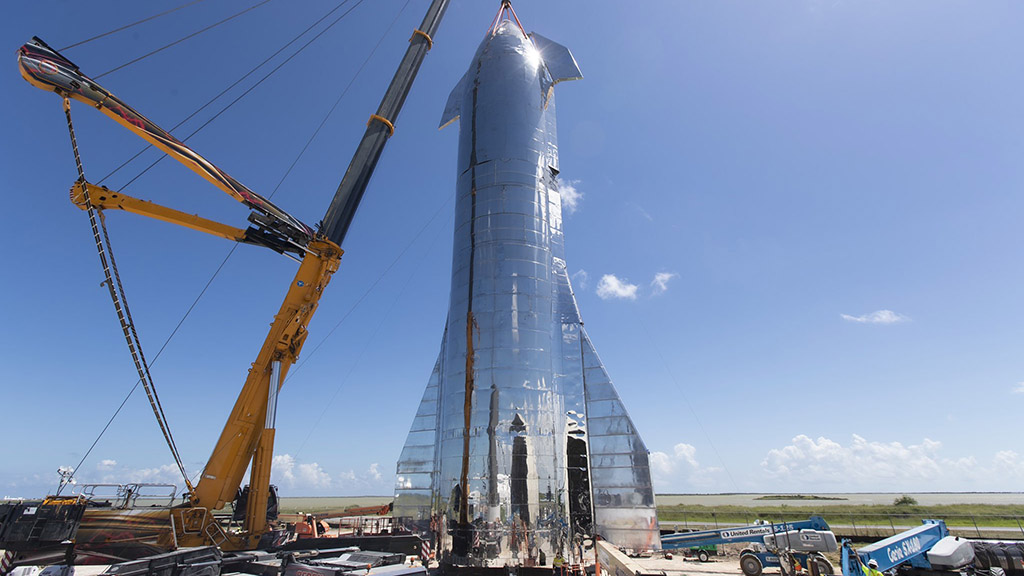 SpaceX CEO, Elon Musk, debuted a fully stacked Starship Mk1 rocket on twitter ahead of an invite-only media event expected to take place on the evening of September 28th. The looming rocket stands approximately 50m (~165ft) tall and will likely serve as the backdrop for Musk’s presentation. It is anticipated that Musk will present design and progress information as well as provide insight about the future of Starship.

Throughout the day Friday, September 27th, multiple teams were on site to orchestrate a delicate integration process of mating the two halves of the rocket. The top half nose cone section which houses cold gas thrusters, and several delicate pressure vessels, tanks, and batteries had the forward movable fins installed prior to mating. The business end of Starship is outfitted with 3 installed Raptor engines and two hinged guidance fins – a design deviation from the plans revealed during Musk’s 2018 presentation which initially indicated a total of 3 fins, two actuated and one stationary.

Many other structures appear to be near completion including the wing hinges of the bottom fins and external raceways that run the length of the rocket on either side providing protective housing for cables and plumbing.

Six. Two windward, one under each fin & two leeward. Provides redundancy for landing on unimproved surfaces.

Although now a fully stacked Starship, there is still some progress to be made prior to the first flight of Mk1 including the installation of 6 landing legs. Whether or not they are to be installed prior to Saturday’s presentation remains undetermined.

Stay with us on Twitter @Teslarati as the team will be on site in Boca Chica for Saturday’s presentation and bring you up-to-the-minute coverage of all developments and events.