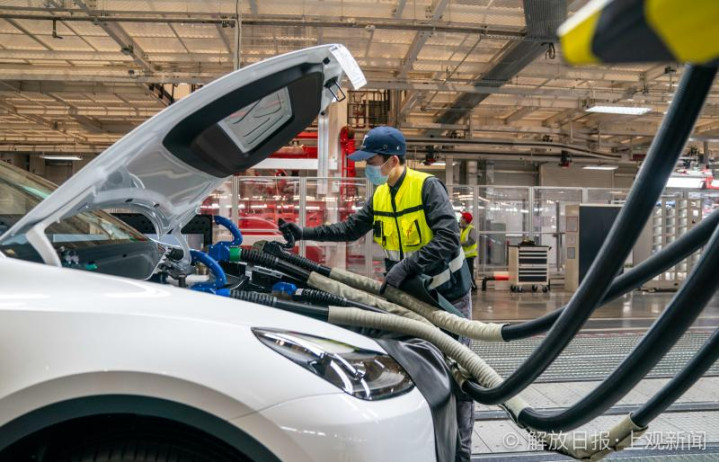 A recent tour of Gigafactory Shanghai has shed some light on Tesla’s intense focus on quality control and its utilization of tech to ensure that vehicles produced in the facility would be easy to service. The observations were shared recently by China-based mainstream news outlets Liberation Daily and Shangguan News, both of whom were given a tour of the Shanghai-based electric vehicle plant.

The tour was, to some degree, another way for the electric car maker to hammer down the notion that the claims by media outlet Pingwest—which alleged that the company’s ERP enterprise software is incapable of tracing vehicle parts and jobs—were false. As seen in videos posted about the tour, Gigafactory Shanghai is a highly-advanced factory that utilizes tech to optimize its operations. This is implemented even in the power tools that the company uses when building its cars.

【Gallery 3】 Interview: Shanghai plant will have an annual production capacity of 450,000 vehicles, how will the quality of the vehicles be ensured? Zhu Xiaotong A: The whole vehicle consistency, in the last year has passed the ISO quality system certification. pic.twitter.com/FSFPhpYYJy

As noted by the Chinese media outlets, every power tool used by Tesla at Gigafactory Shanghai is connected to the cloud. Data such as the amount of torque used and the length of time each device is used is then linked to every VIN that the tool was used on. With this system in place, any issues that may emerge from vehicles produced in the plant could be traced back to where the faulty parts were installed and who installed them.

Tesla factory worker measures the size of panel gaps to ensure symmetric spacing on both sides of the car @elonmusk pic.twitter.com/xEDUznhDT5

The quality of vehicles produced in the Gigafactory Shanghai facility is also exhaustively checked. Clips from the recent factory visit showed how Tesla factory workers measure the size of every vehicle’s panel gaps to ensure symmetric spacing on both sides of every car. This may be one of the reasons why electric vehicles produced in the China-based plant have been lauded for their build quality.

Tesla's Shanghai factory is once again open to the media, and in the photo display section, in addition to images of the production line, there are images of the employee restaurant, which reports show offers a rich variety of flavors🥘 from around China, and all meals are free. pic.twitter.com/Yaj9ipKb35

The Gigafactory Shanghai visit revealed several other notable aspects of Tesla’s operations in the China-based plant, especially on the employee front. These include the fact that Giga Shanghai employees who purchase a Tesla receive the Full Self-Driving suite for free. Employees are also offered free shuttles to get to and from work, as well as free meals from a variety of available restaurant options in the cafeteria. Similar to Elon Musk, Tesla Greater China President Zhu Xiaotong was also observed to lead from the front lines, with the executive setting up his workstation alongside his employees.

【Gallery 2】 The report shows that Tesla Greater China President Zhu Xiaotong has no office or separate workstation in the factory. Zhu said: Maintaining a culture of this kind of innovative startup company, efficiency and pragmatism is a style of the company. #Teslashanghai pic.twitter.com/CzoiSMCJ5F