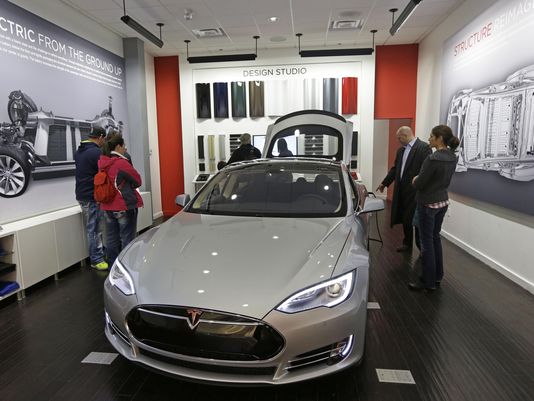 Tesla has applied for a Class A dealer’s license in Michigan according to the Detroit News. Is this the latest strategy to force Michigan to permit Tesla to sell cars its way within the state?

Tesla is ratcheting up its war with the state of Michigan. According to the Detroit News, Tesla submitted an application to the Michigan Secretary of State’s office for a license to sell and service automobiles in Michigan last November. At the request of that office, Tesla submitted follow-up information in recent weeks. At this moment, it is unclear who at Tesla initiated the applications.

Fred Woodham, a spokesman for the Secretary of State’s office, said the department is reviewing the applications and a decision is expected “in the next month or two.” He would not elaborate on what additional information was requested, saying it “isn’t uncommon during the application review process.”

According to an e-mail Woodham sent to the Detroit News on January 31, Tesla applied for a Class A dealership license to sell new and used cars. A Class A dealer is required to have a “repair facility as part of their business or have an established relationship with a licensed repair facility,” according to Woodham.

The filing was first reported by Michigan Information & Research Service Inc., which is located in Lansing. It says if granted a license, Tesla could contract with anyone except itself to sell its cars. It could even dispatch a former employee to open a dealership in the state, specifying in the franchise agreement that the “dealership look, act and do business exactly as the Tesla-run stores.”

Tesla currently has about 400 customers in Michigan. There are 4 Supercharger locations within the state and the company website indicates a Tesla service facility in the Detroit area is coming soon. The Detroit News reached out to Tesla for a comment on the story but received no response from the company. It is possible Elon Musk may offer a clarification during the 4th quarter earnings call scheduled for February 10.

Tesla has been locked in a tug of war with the Michigan legislature for several years. Michigan is home to Ford, General Motors, and Chrysler. None of those companies wants to see Tesla successfully challenge the franchise dealer sales model that has been the norm in the industry for generations. It is believed the major auto manufacturers have been pressuring the legislature to preserve the current system.

But Tesla is a formidable ally. It protested by boycotting the North American International Auto Show in Detroit last month, saying it would not help others sell cars in Michigan if it could not do so itself. This new gambit may substantially weaken the protectionist wall Michigan’s auto dealers and manufacturers have built around themselves.