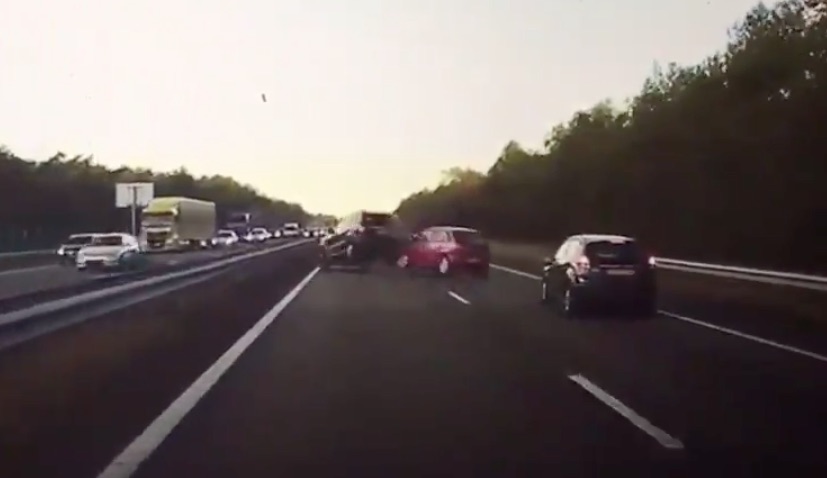 A Tesla owner can count his blessings this holiday after the vehicle’s Autopilot system saved the driver from what could have been a catastrophic collision.

A screen grab of a Tesla dashcam video was posted to Twitter showing Tesla’s radar-based Autopilot system sounding off a forward collision warning well before the accident can be seen. Moments later, a small compact directly in front of the Tesla is seen colliding into a SUV with enough force to lift the mid-size utility vehicle from the ground, and send it tumbling along the freeway.

The video is a great reminder of how autonomous driving technology provides a level of safety far beyond what a human driver can. The ability to detect activity two cars ahead was rolled out in Firmware 8.0 of Autopilot in September of this year and was arguably Tesla’s most significant feature upgrade since the first Autopilot was released back in October 2015. Version 8.0 shifted focus away from the vehicle’s front-facing camera and, instead, placed heavy emphasis onto the vehicle’s onboard radar. The revamped system enabled Autopilot to bounce radar signals beneath a vehicle in front, to help it detect objects two cars ahead.

Independent tests performed by Tesla owner Bjørn Nyland showed this phenomenon taking place after his Model X reacted to an emergency braking situation that took place from a lead vehicle.

With the roll out of Enhanced Autopilot under v8.1 on the horizon, and as Tesla continues to improve on its Autopilot algorithms helped by 3.5 billion miles of fleet data collected through drivers, expect to see a level of safety on Tesla vehicles far beyond what any other automaker can promise.

Original video, authorisation from the owner. Essential, no one could predict the accident but the radar did and acted by emergency braking. pic.twitter.com/70MySRiHGR