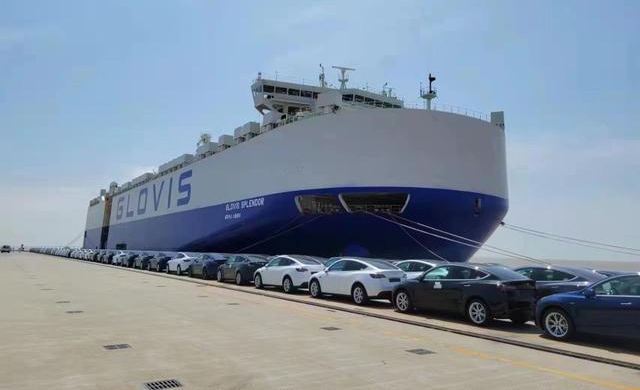 Tesla China’s wholesale figures may have seen a massive drop in April as Giga Shanghai was shut down amidst the country’s anti-Covid measures, but May is shaping up to be completely different. This was highlighted recently when Tesla China exported its first batch of vehicles since Giga Shanghai resumed its vehicle production activities on April 19.

The first batch of exports from Giga Shanghai this month included 4,767 cars that were loaded into the cargo ship Glovis Splendor. Images taken of the shipment revealed that the vehicles were a mix of Model 3 sedans and Model Y crossovers. This suggests that Giga Shanghai’s production lines for both vehicles are ramping at a steady pace.

The vehicles are en route to the Slovenian port of Koper, according to Reuters, citing the government-backed media outlet Shanghai Observer. The Glovis Splendor left port on Wednesday, and reports suggest that another 4,100 electric vehicles from Gigafactory Shanghai will be shipped on Friday.

A customs official informed the Observer that Tesla was in a hurry to start exporting cars to foreign countries again. “Tesla was in a big hurry to load cars freshly off the production lines onto the vessel yesterday afternoon,” the official said.

Tesla China has a lot of catching up to do this second quarter. As per data released by the China Passenger Car Association (CPCA) on Tuesday, the country’s zero-Covid-19 policies and lockdowns caused a 97.7% month-over-month drop in Tesla China’s sales. Tesla China also did not export any vehicles in April.

Gigafactory Shanghai is not yet fully ramped since it reopened its doors on April 19, but the facility is ramping. Tesla still produced 10,757 cars in the remaining days of April, which was quite impressive as there was only one shift of workers in the facility’s vehicle production line at the time. Reports have also suggested that Tesla China is looking to achieve a daily target output of 2,600 vehicles per day starting May 16.