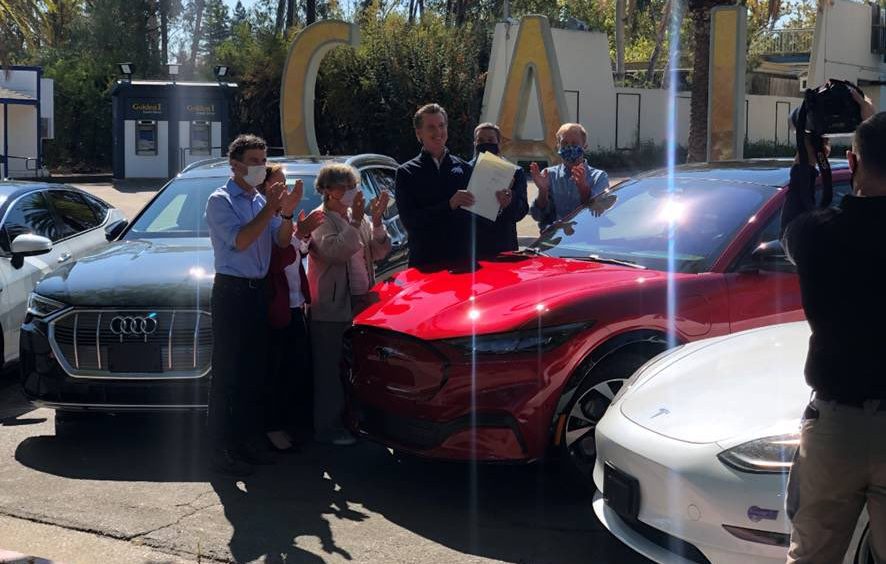 A recent press conference from California Governor Gavin Newsom proved to be quite interesting for the Tesla and electric car community. During his speech, where he praised California’s place as the leader in the United States’ electric vehicle movement, the governor dubbed veteran automaker Ford as the leader in the EV sector. Even more interestingly, the CA governor seemed almost intent to leave Tesla out when he was speaking about the state’s EV milestones.

The governor’s speech was shared on Twitter by Ford COO Jim Farley, who noted that the veteran carmaker is the only American automaker to stand behind California in its efforts to reduce greenhouse gas emissions. This statement promptly raised some eyebrows and sarcastic jokes from the online EV community, considering that Tesla, an all-American automaker, has been mass-producing zero-emissions cars in the state for years. The fact that there was a Model 3 parked beside a Ford Mustang Mach-E during the speech was just icing on the cake.

“I want to thank in particular a number of automobile manufacturers that get it and are starting to get it done, led by Bill Ford and Ford. They have been a leader in this space. They’re not a laggard, and they’re not willing to just suffer the fate of a future of dirtier air, dirtier water, and more climate disruption. They want to lead and they are leading with innovation and an entrepreneurial mindset that’s leading to more customer choice, that’s leading to new technological advancements, and allow them to be on the vanguard of leadership, not just in the United States as a manufacturer, but around the rest of the world,” the governor said.

As noted by tech YouTuber and EV advocate Jeremy Judkins, things get even more interesting when one looks at the governor’s statements before his comments on Ford’s EV leadership. Newsom highlighted that California has 34 manufactures of electric vehicles, and he also remarked that EVs represent the second-largest export of the state. The governor added that the market caps of the publicly-traded electric car makers in California stand at nearly half a trillion dollars.

It should be noted that Tesla represents the lion’s share of the EV exports that the California governor was referring to. The company also represents the majority of the combined $500 billion market cap of the state’s electric car makers, considering that Tesla currently has a market cap of about $360 billion on its own. These figures, as well as the presence of a literal Tesla just a few feet away from Newsom’s podium, made the governor’s speech rather peculiar on its own.

Granted, Ford could probably justify its statements by claiming that Tesla is not a pure automaker, but a tech company per se. Still, the rather discrete denial of the electric car maker’s existence in an event about reducing greenhouse gas emissions is still quite strange nonetheless. That being said, Ford could not claim to be a purely American carmaker either, considering that some of the vehicles it sells in the country are produced in foreign territories. The Mustang Mach-E, for example, will be made in Ford’s Cuautitlán Izcalli, Mexico plant, making the vehicle not quite as “American” as its competitor, the Tesla Model Y, which is produced in California.