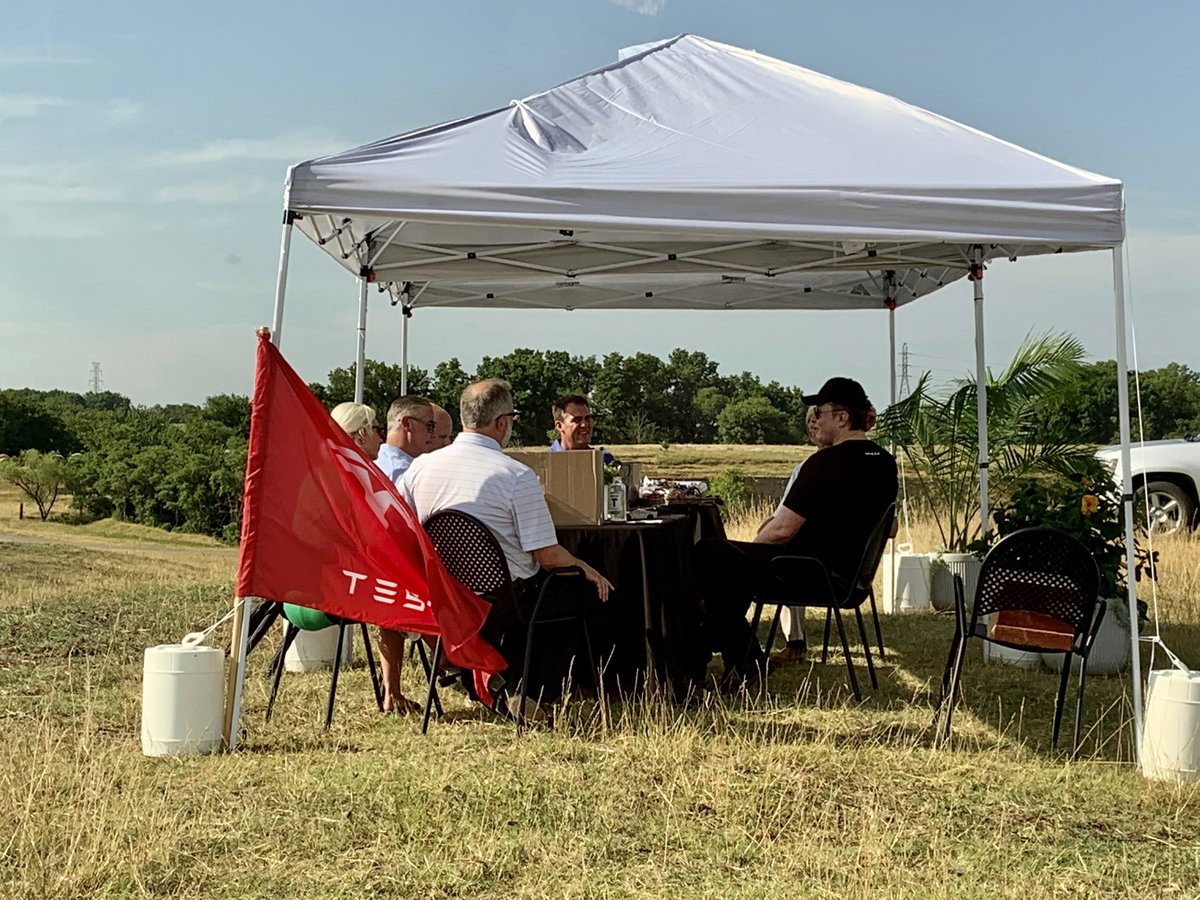 On Friday afternoon, Tesla CEO Elon Musk and Director of Policy and Government Affairs Craig Hulse landed in Tulsa, OK, for a meeting with local officials. Musk’s trip comes amidst Tesla’s highly anticipated announcement about the site of the Cybertruck Gigafactory, the electric car maker’s upcoming manufacturing plant for its unique all-electric pickup.

Musk and Hulse were welcomed by Gov. Kevin Stitt and Secretary of Commerce Sean Kouplen, as well as the property owner of a plot of land that the city is offering to the electric car maker. Images shared by the Gov. Stitt show Musk and local officials conversing in the middle of a massive plot of land. The meetup seemed to be private and simple, though the governor highlighted that he still believes that Tulsa is the perfect place for Tesla’s next vehicle production plant.

In a statement to local news agency Tulsa World, Kouplen noted that the meeting involved showing Elon Musk the plan for the potential Cybertruck Gigafactory site, as well as discussions about the location’s utilities and access to downtown. “To maximize our time together, we had set up a tent, table, chairs, some snacks, and water on the site. You can see downtown from the site, we are up high on a hill, it is really a beautiful day. So we’re basically just having our little over an hour conversation out there in the middle of the field,” he said.

“The site is very important to Elon. He likes to get a feel for it. He really goes based upon his kind of personal feeling. So that was a big part of it, just letting him experience the drive from downtown to the site. We showed him the site plan, what it would looked like on the site. We obviously talked about things like utility access, and water and natural gas access — all the kind of the basics around the site and really just kind of tried to visualize what a Tesla plant would look like on that particularly piece of land.”

Musk, for his part, seemed to have appreciated the meeting, thanking officials for hosting his visit. Musk’s recent visit, as well as his succeeding statements, suggest that Tulsa is still on the running as a potential site for the Cybertruck Gigafactory. This is a small victory for the city, especially considering that Tulsa has launched a series of initiatives and social media campaigns to encourage Musk to consider and select the city for its next vehicle production plant.

Kouplen, for his part, noted that even if Tulsa loses to Austin this time around, it does not mean that Tesla will never establish a presence in the city. This is especially notable considering that Tesla would likely need additional sites for upcoming projects like the Semi’s production ramp and the expansion of its energy products. Thus, for Tulsa, there will be no regrets, regardless of which site Tesla selects for the Cybertruck factory.

“This won’t be the last factory they build or the last investment they make. We’re building a relationship with Tesla that will continue regardless of what happens this time,” Kouplen said.