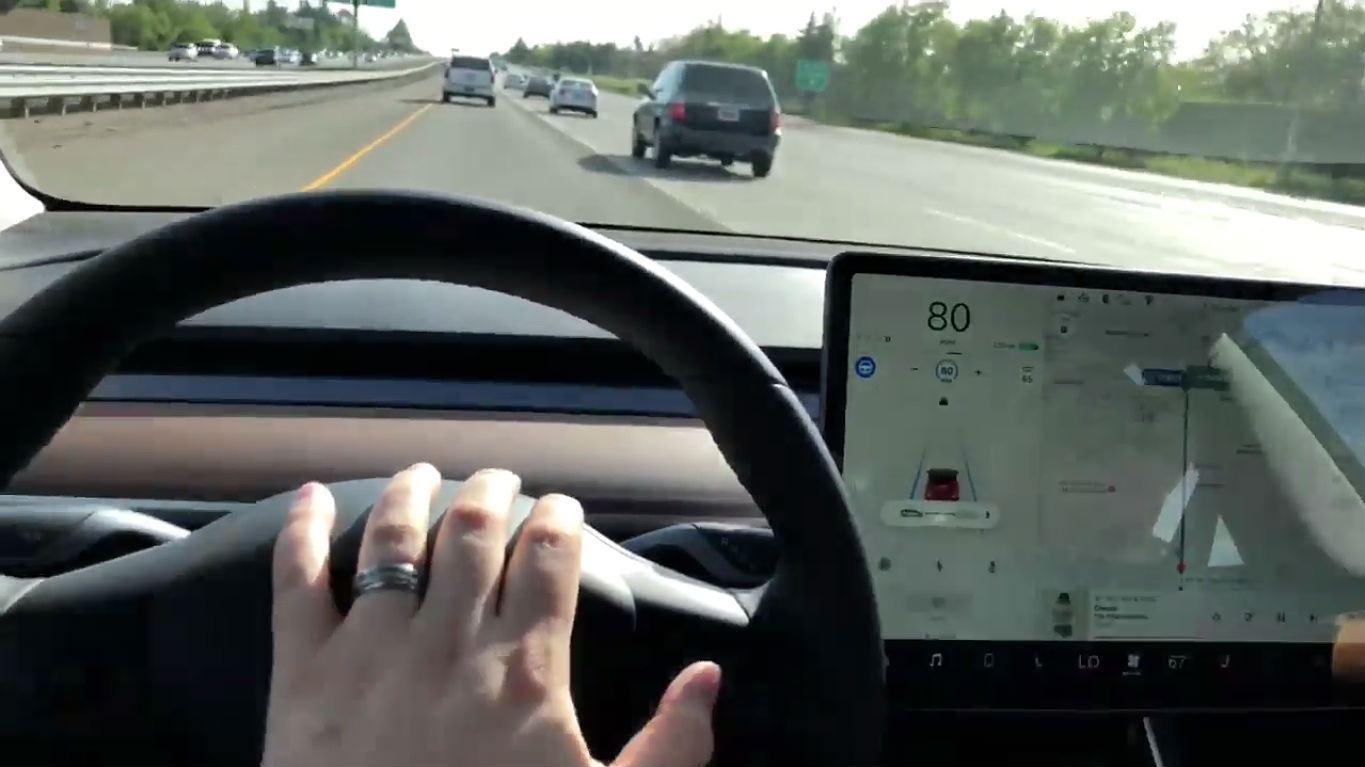 A video of the Tesla Model 3 Autopilot controls using the car’s right steering wheel scroll button is starting to make its way online. As could be seen in a short demonstration of the feature, changing the Autopilot settings for speed and distance from the Model 3’s steering wheel appears to be natural and convenient for drivers.

Tesla introduced the new feature for the Model 3 Autopilot controls with its latest software update, v8.1 (2018.12.1). Reports of the new patch started spreading in the forum community since the final days of March, though screenshots of the release notes and videos of the new AP feature in action have only been shared over the weekend.

Following are excerpts from the release notes for the Model 3’s latest firmware update. A screenshot of the Model 3’s 15-inch touchscreen showcasing the follow distance option could also be seen in the gallery below. The images were shared by Tesla Motors Club members StockOption and Fhrust. 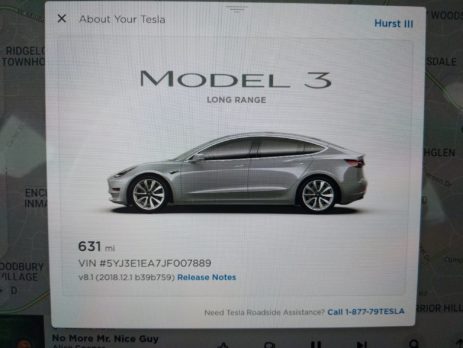 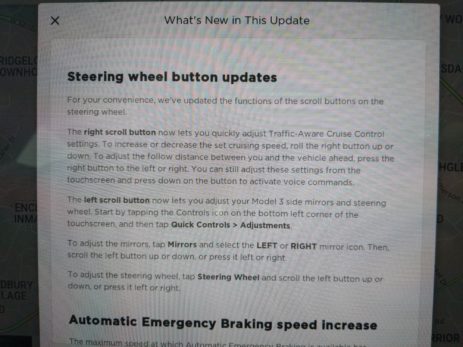 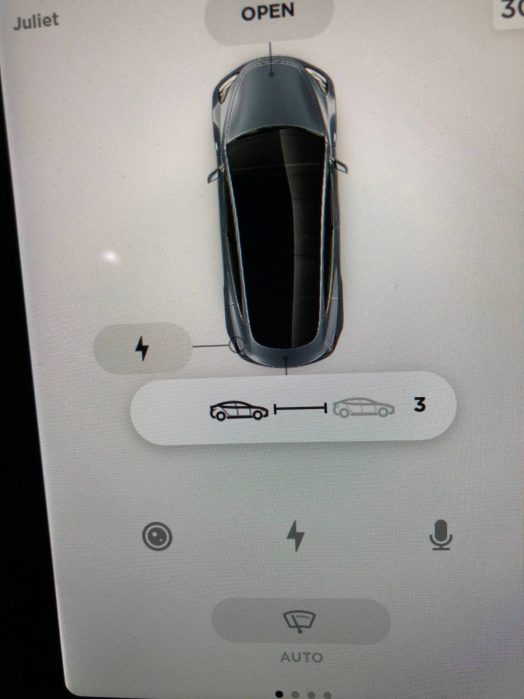 For your convenience, we’ve updated the functions of the scroll buttons on the steering wheel. The right scroll button now lets you quickly adjust Traffic-Aware Cruise Control settings.

To increase or decrease the set cruising speed, roll the right button up or down. To adjust the follow distance between you and the vehicle ahead, press the right button to the left or right. You can still adjust these settings from the touchscreen and press down on the button to activate voice commands. 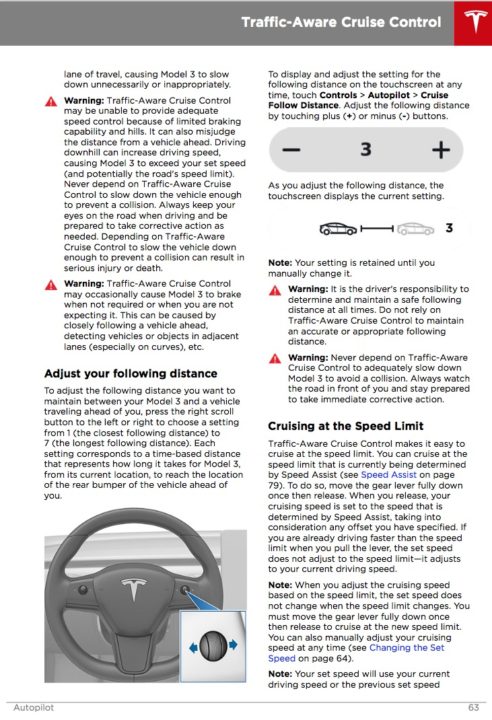 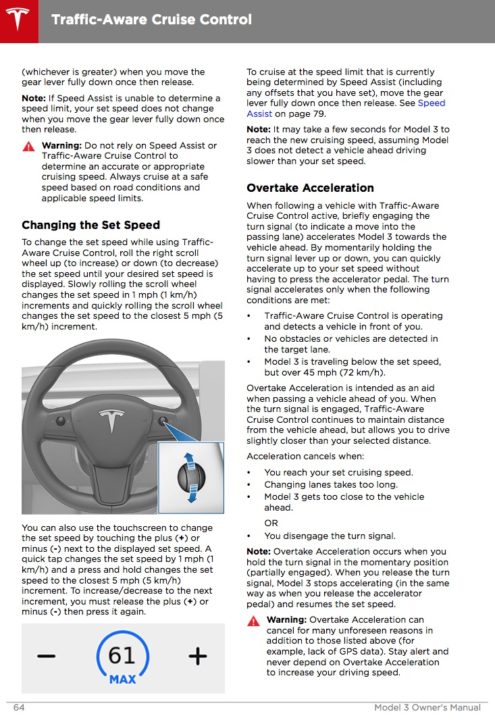 A video showcasing the new Model 3 Autopilot controls was uploaded to a private Tesla Facebook group by Model 3 owner Ivan Karpenko. The short clip, which could be viewed below, features Ivan adjusting his electric car’s AP settings without touching the Model 3’s 15-inch center display. According to the Tesla owner on his Facebook post, the new Model 3 Autopilot controls “feel natural.”

Elon Musk went on a Twitter session this weekend, providing a rough timeline for the production of the Model 3’s dual-motor AWD variant. According to Musk, the production rate of the Model 3 line would have to reach a pace equivalent to 5,000 per week before other options could be rolled out. Musk then stated that the dual-motor AWD variant would probably be introduced in July.

Musk provided a brief update on the Model 3’s white seats/interior option as well. As we noted in a previous report, the Tesla CEO stated that white seats would be rolled out in “similar timing” as the car’s dual-motor AWD configuration.

Being the ever-interactive CEO, Musk also vowed to address a recent issue plaguing some Model 3 line-waiters. After receiving complaints that some who ordered the car online are getting their Model 3 configuration invites before line-waiters, Musk vowed that “corrective action” would be taken. Musk also issued an apology for the inconvenience.

Watch the new Tesla Model 3 Autopilot controls in action below.