A recent firmware update rolled out to Model 3 suggests that Tesla will use data from its fleet’s Autopilot cameras as a means to push the development of its self-driving software.

Tesla’s new update and its invitation to share data was posted by Model X and Model 3 owner u/dirtyfries of the r/TeslaMotors subreddit. According to the Model 3 owner, a recent update, v8.1 (2018.14.1), included a feature that allows Tesla to record and send back external video clips from the electric car’s Autopilot cameras. Model 3 owners who would not like to share their camera data could opt out of the feature.

We are working hard to improve autonomous safety features and make self-driving a reality for you as soon as possible.

In order to do so, we need to collect short video clips using the car’s external cameras to learn how to recognize things like lane lines, street signs, and traffic light positions. The more fleet learning of road conditions we are able to do, the better your Tesla’s self-driving ability will become.

We want to be super clear that these short video clips are not linked to your vehicle identification number. In order to protect your privacy, we have ensured that there is no way to search our system for clips that are associated with a specific car.

Do you agree to allow us to collect these clips? You can change your mind later at any time.

In order for these features to work, Tesla measures the road segment data of all participating vehicles but in a way that does not identify you or your car, and may share that with partners that contribute similar data to help us provide the service. At no point is any personally identifiable information collected or shared during this process.

Do you agree to allow us to collect this data? You can change your mind later at any time.

Looking at the notes of Tesla’s data sharing feature, it appears like the company will be collecting two kinds of information from its fleet — location data and video data. The phrasing of the feature’s release notes also makes it clear that Tesla owners will not be risking any sensitive information by participating in the program. The Model 3 owner further noted that Tesla seems to be rolling out the feature to its entire fleet, since he opted out of FSD when he ordered his electric car. 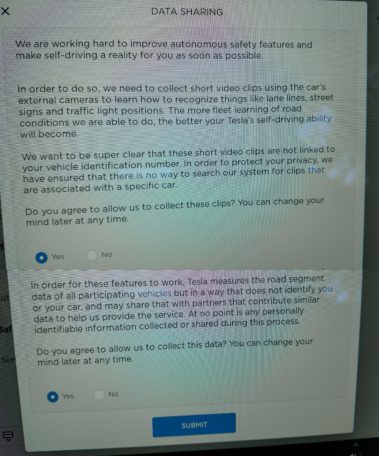 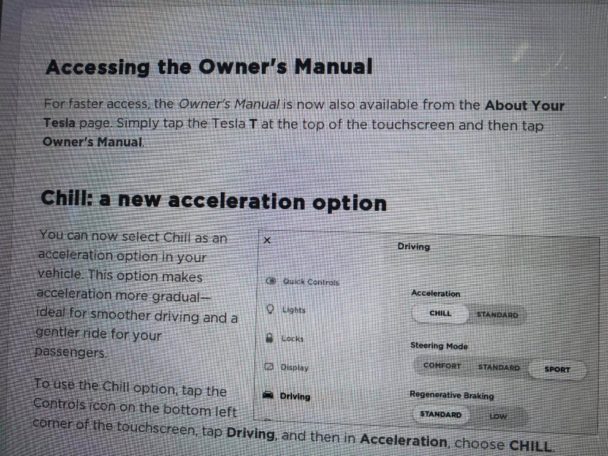 Apart from data sharing, v8.1 (2018.14.1) also introduced Chill Mode for the Model 3. The setting allows the car to accelerate in a much more gradual manner, which is ideal for drivers who prefer a smoother, gentler ride. In order to activate the feature, Model 3 owners would have to tap the Controls icon on the bottom left corner of the car’s 15-inch touchscreen, then tap Driving > Acceleration > Chill.

During Tesla’s fourth-quarter earnings call last February, Tesla CEO Elon Musk announced that the company’s coast-to-coast autonomous trip would happen sometime this year. During the Q&A portion of the call, Musk stated that the demonstration would be conducted once Tesla develops an FSD suite that can run on all roads under any conditions. With this in mind, Tesla’s recent invitation to share data appears to be a step towards accomplishing the company’s highly-anticipated coast-to-coast autonomous drive.