Elon Musk has finally explained why the company ultimately delayed its 2017 plan for a coast-to-coast autonomous drive, and why he stands firm on Tesla’s three-pronged Autopilot approach for full self-driving over LiDAR technology.

During the Q&A portion of Tesla’s Q4 earnings call, Romit Jitendra Shah of Nomura Instinet asked Musk for any updates on the company’s plans for a fully autonomous coast-to-coast drive. Responding to the inquiry, the Musk explained that Tesla is focused on developing a full self-driving suite that would work on all roads under any conditions — something that would have been compromised had Tesla forced the feat last year.

“We could have done the coast-to-coast drive, but it would have required too much specialized code to effectively game it or make it somewhat brittle and that it would work for one particular route, but not the general solution. So I think we would be able to repeat it, but if it’s just not any other route, which is not really a true solution,” Musk said.

When asked about the timeline for the coast-to-coast autonomous drive, the Tesla CEO stated that it might happen in three months, or “six months at the outside.” Musk further stated that the feature would be available for Model S, X, and 3 customers who purchased the Full Self-Driving (FSD) upgrade for their vehicles. The CEO did not confirm, however, if the feature would be rolled out to customers immediately after the coast-to-coast drive is accomplished, or if customers would have to wait before being able to access the feature.

Perhaps the most interesting part of Musk’s statements about FSD, however, came from David Tamberrino of Goldman Sachs. During the Q&A session, Tamberrino asked Musk about his comments on LiDAR technology, a particularly prominent feature of Tesla’s rivals in the self-driving field. Responding to the inquiry, Musk was firm in his stance that LiDAR is not needed for Tesla’s vehicles to achieve fully autonomous driving, even going so far as to state that rivals being dependent on the technology might be making a grave mistake.

“In my view, it is a crutch that will drive companies to a local maximum that they will find very difficult to get out of. They’re going to have a whole bunch of expensive equipment, most of which makes the car expensive, ugly and unnecessary. And I think they will find themselves at a competitive disadvantage,”

Musk further explained that utilizing sophisticated radar equipment is a far better option for FSD. Tesla is steadfast in using its three-pronged approach featuring redundant forward cameras, forward radar, and near-field ultrasonics will be key to the eventual mastery of autonomous driving.

Musk reaffirmed his stance on using this technology, as it allows vehicles to “see” through snow, rain, dust, and fog — conditions that even experienced drivers find difficult to drive on. Overall, Musk stated that he is optimistic about the development of Tesla’s autonomous driving suite. While Tesla’s CEO admitted that progress has been slow, he asserted that when the company achieves FSD, it would be something truly remarkable. 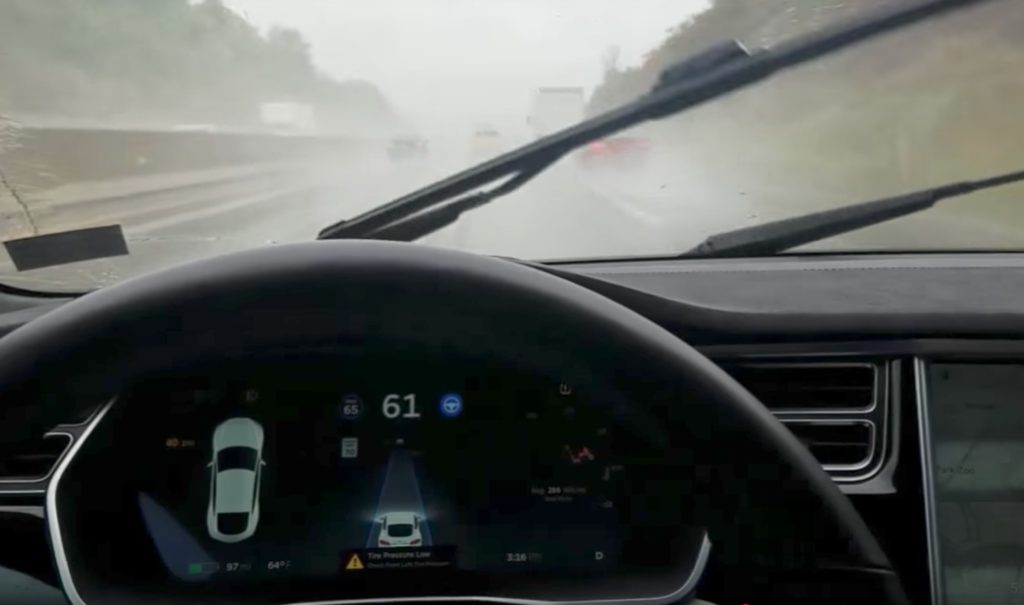 It’s worth noting that Musk also stated that his beliefs in FSD, LiDAR, and radar technology might be proven wrong in the future. Musk did assert, however, that he is confident in his belief that Tesla’s non-LiDAR approach is the correct way to go.

Now perhaps I am wrong. In which case, I’ll look like a fool. But I am quite certain that I am not,” Musk said.

In a lot of ways, Musk’s statements about LiDAR and the delayed autonomous coast-to-coast drive makes perfect sense. As we noted in a previous report, Tesla’s focus on FSD technology is quite different than its competitors, in the way that the company is attempting to create a system that works under any conditions in any location. The leaders in the field, such as Waymo and GM, on the other hand, are pursuing something different, creating a system that works perfectly in a pre-programmed, set route.