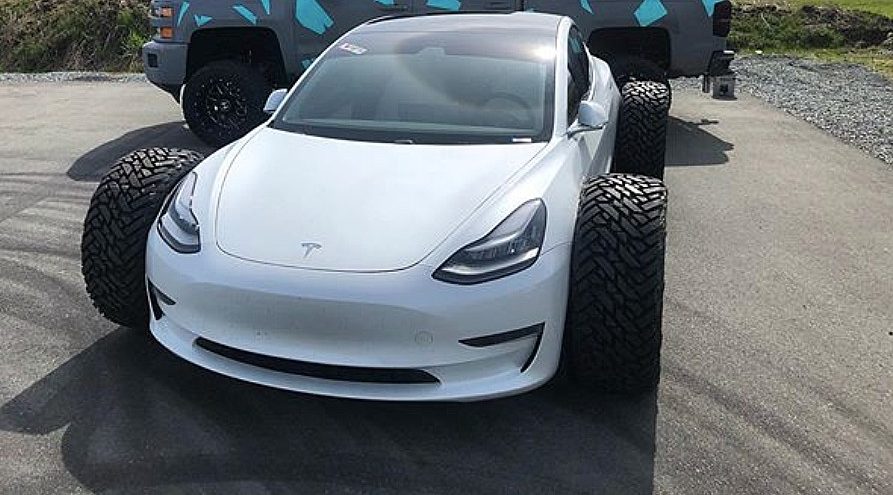 A Tesla owner notorious for crazy modifications that led not-so-ideal outcome from a warranty claim is making waves again, this time for showcasing monstrous 24″ truck tires on his all-electric Model 3 Standard Range+ sedan.

Despite spending $7,000 on required repairs because of his snow track modification, Michael of the lowlifeduramax YouTube channel seems to have no plans to stop putting insane customizations on his Model 3. Recently, he installed a set of 24″ tires on the electric sedan. The rubber won’t fit under the body of the vehicle, so the tires lay completely exposed just outside of the Model 3’s white exterior.

To add some perspective, the Model 3’s body stands at the height of 56.8 inches with stock 18″ wheels installed. This means the newly installed 24″ tires are 42% of the height of the vehicle.

The deep treads in the tires Michael will presumably be used on his Model 3 appear to be offroad tires. The installation of off-road capable rubber could mean the Standard Range+ Model 3 could head to a familiar territory of trails, but this time they would not be covered in snow.

Michael has had a knack in the past for riling up members of the Tesla community. In the past, his channel has documented the Model 3’s performance in drifting contests and a tug-of-war competition. However, he is most well-known for the crazy modifications he has made to his Model 3, as they have drawn attention from many entities, including Tesla, who declined to honor a warranty claim from Michael for two new axles and a drive unit. The damages to these parts of the electric sedan came from Michael’s installation of snow tracks to the rear axle.

The use of snow tracks on the Model 3 led to excessive amounts of stress on both the front and rear axles. Additionally, 50% gear reduction caused the drive unit to encounter excessive amounts of heat, which needed to replacing as well. The repair set Michael back $7,000 according to a video he posted in early April, where he stated the Model 3 was back in his possession.

After calling out Tesla for not honoring their warranty, many supporters of the electric car manufacturer stated that the vehicle’s warranty clearly described that aftermarket parts would void the company’s ability to cover parts failures. “[Tesla] shouldn’t claim 1 mil mile motors and ‘built like truck,'” Michael said.

However, Michael is in the business of creating content, and these crazy modifications pay his bills. While it is currently unknown what exactly will come of the 24″ tires shown next to his Model 3, we are sure that a video will soon follow, stirring up more controversy, and interest, within car enthusiasts of all kinds.