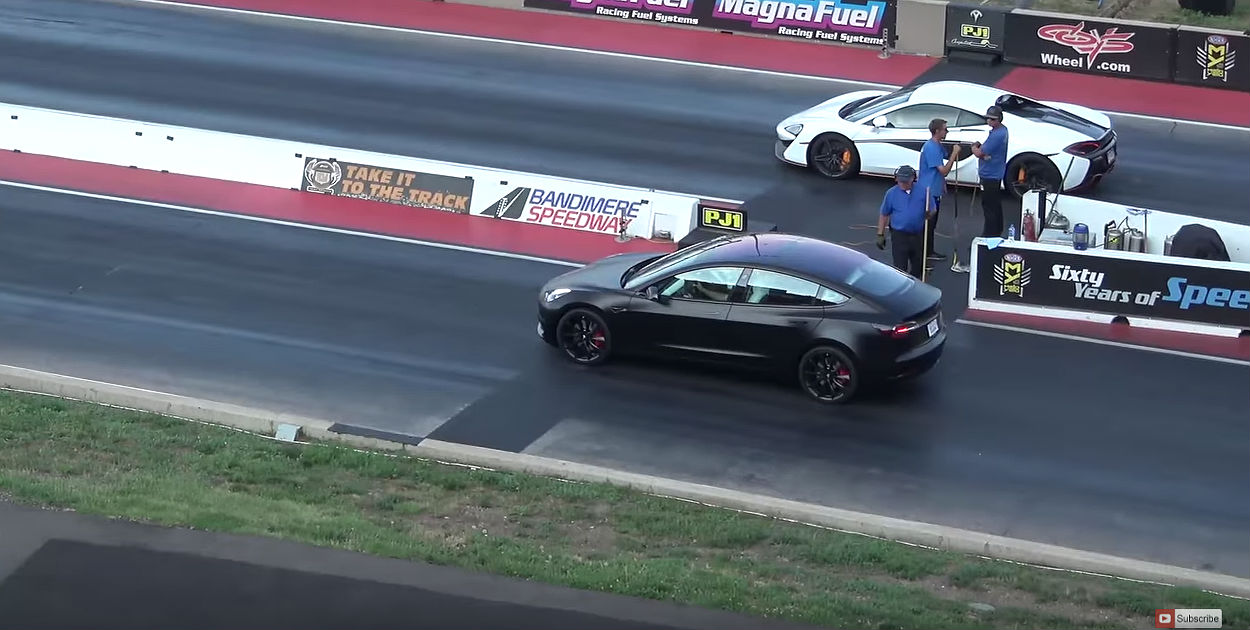 There is no denying that the Model 3 Performance is quick, especially considering VBOX data validating the car’s 0-60 mph acceleration figures. But the question is, would it be fast enough to beat an actual supercar on the drag strip? Perhaps, even something as daunting as a McLaren 570S?

This was something explored recently by Tesla owner-enthusiast Erik Strait, better known as the host of YouTube’s DÆrik channel. Thanks to a friendly owner in the area, Erik has been able to test out the capabilities of the Model 3 Performance, which adds dual motors and a $5,000 Performance Upgrade package to the base trim, including 20″ Performance Wheels, Michelin Pilot Sport 4S summer tires, a carbon fiber rear spoiler, aluminum alloy pedals, and a top speed boost that enables the electric car to max out at 155 mph.

McLaren’s supercars are actually embedded in the history of Tesla, with CEO Elon Musk famously buying a McLaren F1 when he made his first millions after selling Zip2, his first company. Musk would later infamously wreck his McLaren F1 in a joyride with Peter Thiel, but the supercar would hold a special place in the Tesla CEO’s heart for years to come. When Musk unveiled the Model S P85D, for example, he made it a point to highlight that the electric car’s 0-60 mph time of 3.2 seconds is comparable to the acceleration of the supercar.

The 570S is McLaren’s “baby” supercar, slightly less powerful than its flagship vehicles like the 650S but incredibly fast just the same. The 570S is equipped with a twin-turbo 3.8-liter V8 engine making 562 hp and 443 lb-ft of torque. The car is also fitted with a slick-shifting 7-speed dual-clutch automatic transmission, which helps propel the vehicle from 0-60 mph in 3.0 seconds. The 570S’ top speed of 204 mph places it beside popular supercars like the Lamborghini Huracan 610-4 Spyder and the Ferrari 488 Spider 3.9 V8 Turbo. Compared to the McLaren 570S, the Model 3 Performance appears completely outclasses, with its dual motors producing a combined 450 hp and 471 lb-ft of torque and its top speed of 155 mph.

The Model 3 Performance is not a supercar, both in design and in function. While the McLaren 570S had bad launches on both races, the time differences between the two vehicles’ quarter-mile runs were just way too close. With stickier tires and a possible Ludicrous upgrade in the future, the Model 3 Performance could most certainly establish itself as a force to be reckoned with on the drag strip, just like its two larger siblings — the Model S P100D and the Model X P100D.

Watch the Model 3 Performance stand up to the McLaren 570S in the video below.