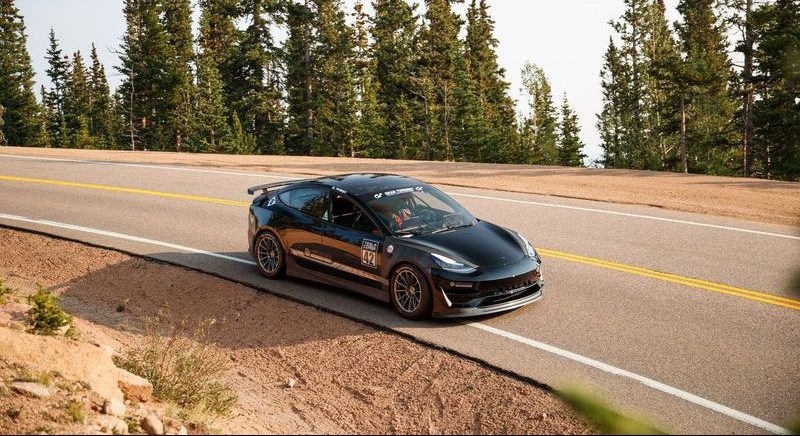 Unplugged Performance has confirmed its attendance at the 2021 Pikes Peak Hill Climb, where the Model 3 it took last year still managed to take second place in its class after a crash during the practice session in the 2020 event.

Randy Pobst, the driver of the Unplugged Performance Model 3, took to Instagram to announce the group’s attendance at the event, looking for redemption despite its impressive performance last year. Despite Unplugged and Pobst’s performance that earned them a silver medal in its class, finishing just behind Blake Fuller and his Model 3 Performance, the all-electric car’s chief navigator is not completely satisfied with its showing.

“Last year was a miracle comeback,” Pobst said, referring to the Model 3’s violent crash during a tuning session before the races. After Pobst navigated a corner at high-speeds, a bump caused a difficult maneuver that the professional could not recover from. The Model 3 then slid off the track at high speeds, hitting a wall and ending up off the course with severe damage to the body and chassis. Luckily, the legendary racer was uninjured, and with the help of Porsche Colorado Springs and EuroCars, the Model 3 was able to be reconstructed in time for the Sunday race. The process required some extra attention from three Tesla engineers who showed up to ensure the repair process was efficient and the car was ready in time for the race.

Today Randy took his first practice lap on the upper section way too hot, hit a huge dip, got airborne and here’s the result. Most importantly, Randy is safe and our safety systems did their job. Heartbreakingly, our quest to break 10 minutes at Pikes Peak is unfortunately over. pic.twitter.com/wh7URW48z2

“We’ve got unfinished business. I came away from there so full of happiness and frustration. We want to go for that 10-minute time; we want to go back and win the class. We’re heading back to the clouds at Pikes Peak,” Pobst added.

Incredibly, Unplugged’s Model 3 was able to record a time of 11:04.131, trailing the other Model 3 driven by Out of Spec Studio’s Blake Fuller by around 1.3 seconds, a time fast enough to earn it top marks during the hill climb. The two all-electric vehicles were well ahead of the third-place finisher Scott Birdsall, who took home the bronze in a 1949 Ford F1 with a time of 11:24.065.