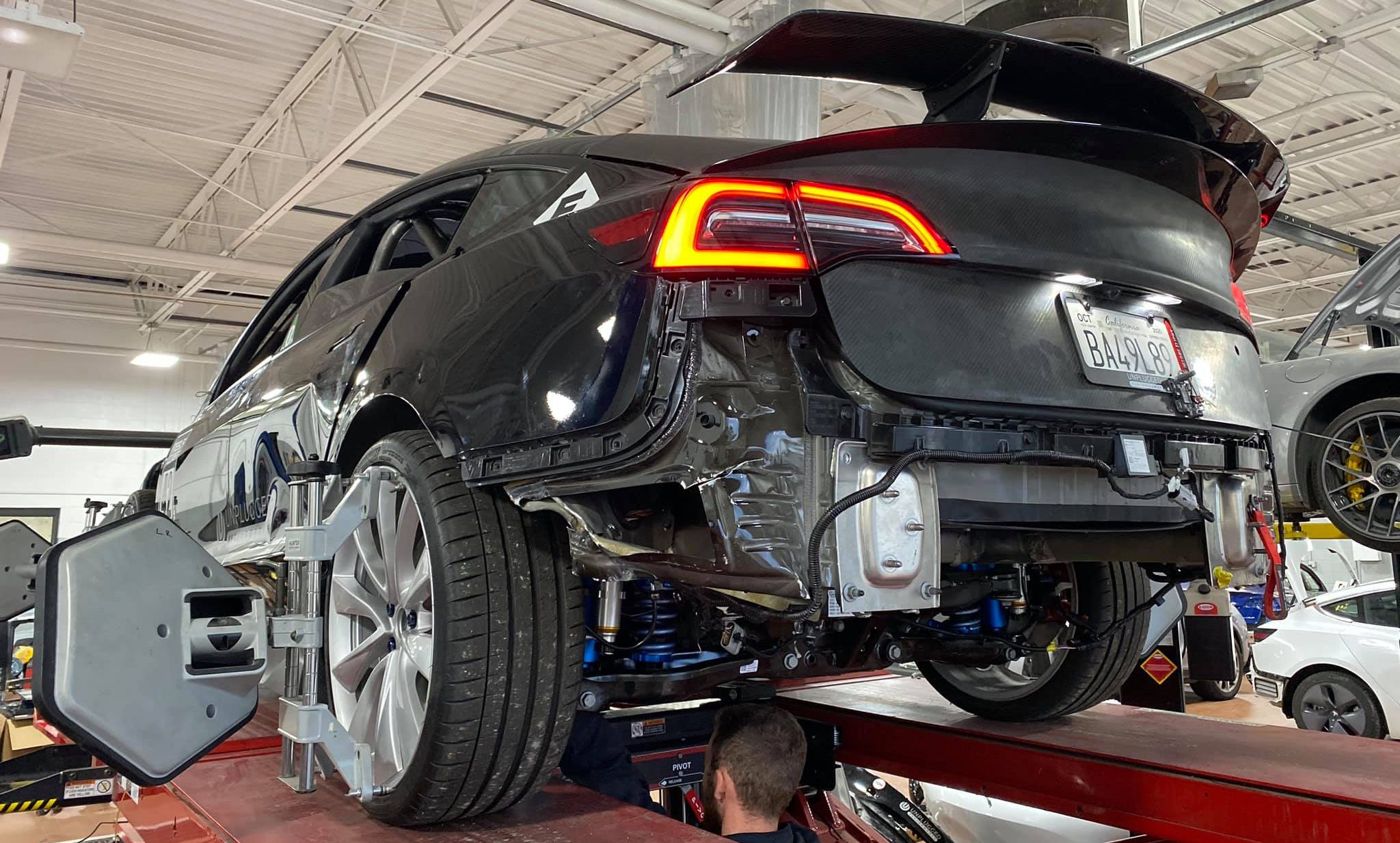 During the first day of Pikes Peak’s qualifiers, legendary racecar driver Randy Pobst and his Tesla Model 3 Ascension-R from EV tuning house Unplugged Performance dominated their class. The team was heading towards Sunday’s race at the top of their game, and there was little that could topple the modified Model 3’s momentum. Unless something unexpected and catastrophic took place, of course.

Unfortunately for the Unplugged team and Randy, something unexpected and catastrophic really did happen. During the Model 3’s first run on the second day of qualifiers, the modified Tesla hit a bad bump at speeds that the professional racer was unable to recover from. The Model 3 went off-course, hitting a wall and ending up in the dirt. Fortunately, Randy was uninjured during the accident. An in-car video of the crash even showed the veteran racer seemingly trying to get the car to respond, to no avail.

As noted by Unplugged Performance CEO Ben Schaffer, the damage to the Model 3 was extensive. Pretty much everything that could break in the car broke, from its motors to its suspension to its frame. In the immediate aftermath of the crash, it appeared that the team’s dream of raising the Tesla flag at the summit of Pikes Peak on Sunday has been crushed. After all, the Model 3 Ascension-R, described by Randy as one of the best vehicles he has ever driven up the treacherous mountain, was totaled.

But sometimes, it takes more than a totaled racecar to keep the human spirit down. In what could only be described as a decision that was equal parts impressive and insane, the Unplugged team decided to try and repair the Model 3. The officials of the Pikes Peak Hill Climb required that the team use the same vehicle that was involved in the crash, so the idea of using a fresh Model 3 Performance was quickly scrapped. What followed was an astounding effort that involved numerous Tesla community members, employees of the electric car maker, and EuroCar, an authorized Tesla body shop, all working together to do the seemingly impossible — resurrect a totaled racecar in 48 hours.

With but a couple of days before the actual Pikes Peak Hill Climb on Sunday, the Unplugged team and Tesla community members worked around the clock to revive the damaged Model 3 Ascension-R. The team bought another Model 3 Performance that could be stripped for fresh parts, which was promptly delivered by the head of Tesla Service in Colorado. Parts were ordered and shipped as quickly as possible. Three Tesla engineers even came over to ensure that the whole repair process went smoothly. The team worked tirelessly, transferring parts, repairing damaged sections, and tuning the revived Model 3 racer to make the vehicle worthy of taking on Pikes Peak in time for Sunday’s hill climb event.

“We will never quit. Performance is more than lap times, it is a will to persevere over all obstacles. A totaled car won’t be the ending of this story for Randy or for us. I told Randy we will move mountains and we did. Today we assembled an army of support, we bought a new car, and we are working 24hr shifts to use the new car to move parts over to the race car. Whatever it takes we will overcome. See you at the top with Randy waving the Tesla flag,” the Unplugged CEO noted.

It was a tall order considering the degree of damage on the Tesla Model 3 Ascension-R. But as the team worked tirelessly while being sustained partly by food sent over by other Tesla owners, something remarkable happened. Part by part, the damaged Model 3 started looking like a racecar again. With each repaired section, with each new part fitted onto the damaged vehicle, the Model 3 racer showed signs that perhaps, just perhaps, the dream of participating and thriving in one of motorsports’ most dangerous events in a consumer-grade electric sedan was not dead yet.

It was an inhuman push that needed a near-miraculous set of circumstances to succeed, but the Model 3 Ascension-R was reborn for the Pikes Peak Hill Climb by the start of the weekend. With the racer reborn, Randy and the Unplugged team now have another chance at taking on the extremely challenging, extremely dangerous Pikes Peak course. In a video on his YouTube channel, Randy Pobst has noted that life is “magnified” in racing, as it deals with exhilarating victories, heartbreaking losses, and inspiring comebacks. Pikes Peak has witnessed all of this over the years, and the Tesla community could only hope that on Sunday, Randy could finish the hill climb in impressive fashion and wave the Tesla flag at the top of the course.