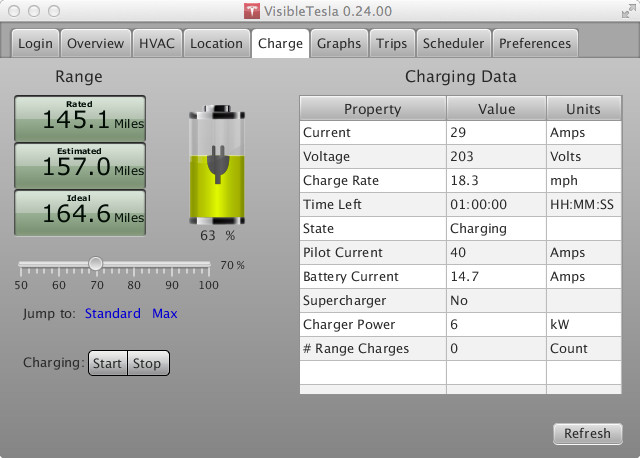 Tesla Motors seen as a key sponsor of Web Directions in Sydney, Australia.

More than 2 years after the it first went on sale in the US the Model S arrived in Australia in late December 2014. As an early owner of the Model S the car generates a lot of interest from friends, neighbours and the general public when you’re out and about. One of the most common questions is how much does it cost to run. We need a new language to describe this as litre’s per 100km doesn’t work and a “full tank” in a Model S is less than a normal tank in a modern petrol car. The answer I find people find easiest to understand is $11 for a full charge which lasts for around 500kms.

Compared to a petrol car this is great, current models will give you 500 – 1000kms from a tank but you’ll spend $50 to $100 to fill them up (at the current, and relatively cheap fuel prices). To understand where the $11 comes from let’s dig into electricity pricing in Australia a little more. Historically homes have been configured with analog meters. All the power we use is charged at a flat rate day and night. Optionally an off peak circuit was often installed which was only connected to the hot water service. Available into two variants supply is remotely controlled by the electricity company for circa 6 or 12 hours per day.

More recently smart meters are being installed on new dwellings and with consumers that have added solar photovoltaics to their home. In certain states such as Victoria blanket rollouts of smart meters have been known to occur. Once installed electricity is charged on tariffs that vary across different times of the day for weekdays and weekends. Tariffs vary across networks but generally consist of a peak morning or late afternoon & evening period, shoulder during the remaining waking hours on weekdays and across the weekend and off peak for overnight.

For both analog and smart meters the difference in tariffs between their maximum and minimum are material. From a low of circa $0.10/kWh on off peak to a high of $0.50/kWh in peak periods.

A smart meter provides much greater flexibility, but the real cost of changing from an analog needs to take into consideration your whole home.

The average Australian home uses around 20kWh of electricity per day or and the average vehicle travels 270kms per week. In Model S terms this equates to 140 kWh per week on your home and 55-65 kWh per week to charge the car.

Obviously these figures vary enormously depending on your personal home and driving habits but car charging is likely to remain the smaller part.

What about charging from solar? Everyone that has solar has a smart meter and hence the ability to control the price they pay for the electricity which is used for charging their car. Households that installed solar early are on feed-in tariffs which pay them for all or just the excess power that they produce. In the majority of cases these rates are much higher than the cheapest power available over night. Those that aren’t on solar power are mostly being paid feed in tariffs which are only marginally lower than the price they pay for power over night.

Most users will be better off using their solar in their home or selling it then buying cheap power overnight to charge their car. There are certainly users for whom it would be cheaper to charge from the power generated through their solar system, but the cost and complexity of making it work is unlikely to stack up. Some form of power router is needed that can take into account usage by other appliances in your home, the tariffs, the amount of charge your car needs each day and the potentially intermittent supply of sun on any given day.

LEARN MORE: How to reduce your electricity usage at home in Australia?