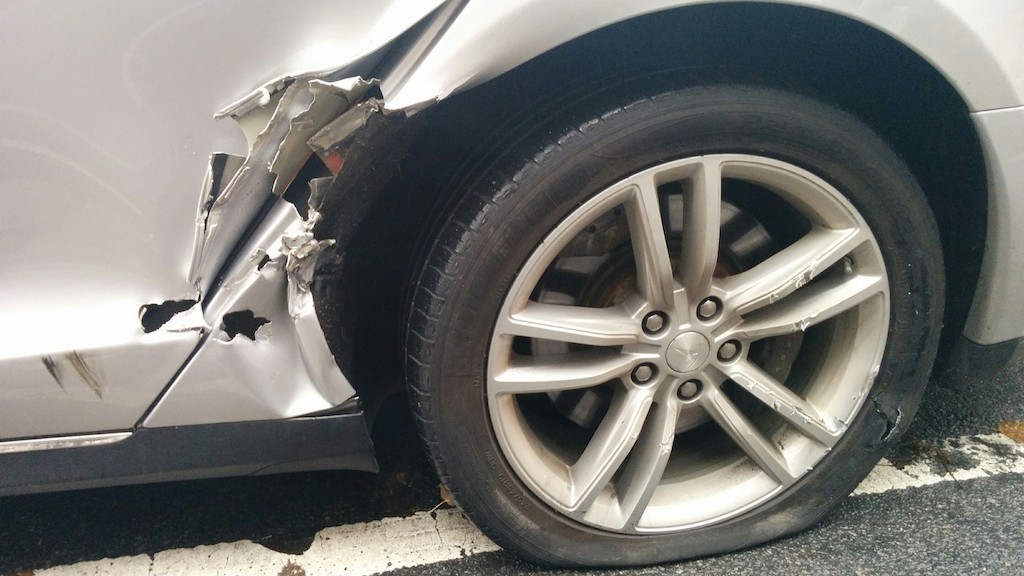 A minor accident turned into a major repair headache for this New York based Tesla owner. (Source: Standard Code)

Last month, a Tesla Model S owner documented a small accident in Midtown Manhattan and surprised the TMC discussion board by revealing that his car was to be declared a total-loss by his insurance company, Costco Insurance Agency. The damage occurred to the outside of the wheel-well, the tire and the certified shop also claimed some damage to the suspension, see image above.

From the surface, it looked to be a small amount of work but the total bill after being sent to a certified Tesla repair shop was $30,000, which included $10,000 in parts and $20,000 in labor. The kicker was that Costco Insurance initially decided they’d rather declare the car a total loss than pay $30k+tax for repair.

So the discussion on the board turned to replacement value with his insurance company and this is where the frustration started. The owner documented the back-and-forth with his insurance company and realized that it would be quite a financial hit with the replacement option. The owner originally paid $104,000 for Model S85 and received it in December 2013.

According to the owner, the insurance company had no Kelly Blue Book value to lean on and wielded its own internal formula for the car’s value. The Tesla discussion board and owner calculated a $75,000 replacement value for his year-old car, which included sales tax. The owner, known as standardcode, was not really happy with that amount due to his financing, which had him on the hook for another $70,000 US Bank for the car. There was a lot of discussion on depreciation and commenters felt the depreciate in this case was pretty accurate.

The thread generated many other related topics. Some discussion centered around the owner’s initial frustration with Tesla’s pre-paid service agreement that’s not transferrable to another car or owner. However, the owner said that after talking with Tesla Motors during this process that they would prorate his agreement to his next purchase.

Also, others mentioned on the board that other luxury cars would not have been totaled due to such a small amount of bodywork, but some pointed out that a new Model S means the ability to add recently added features (can you say P85D).

Throughout December 2014, we have been talking with standardcode and found out the ordeal was still fluid and the insurance company was reconsidering (Clean Technica reported it was a done deal). Early this month, standardcode told me that Ameriprise reconsidered and did pay for the repairs that came to $35,000.

In an email to Tesla Motors this month, the owner wrote, “the body shop was obviously good at what they do and they communicated well too. They even sent me pictures of the work constantly. Having said that I still think $35,000 to repair the damage my car had is very high and I do still think that Tesla as a company needs to worry about the full ownership lifecycle including repairs etc.”

He went on to write, “All in all, I recognize that it was Ameriprise that caused me the headaches here and wasted a lot of my time.”

Standardcode picked up his repaired car in early January and mentioned “the most important lesson I learned is to have better insurance with replacement value. I guess there’s some legal risk to it but I’d have appreciated advice on which insurance is best when I first purchased the car.”

This tale, to me, is all about growing pains for a low-volume automaker. There’s been discussion about the car’s aluminum body as a reason for the high cost for parts and also the lack of certified Tesla body shops at this point for driving up repair costs? In Chicago, there’s only one certified body shop in the metro area.

Addendum:
taurusking via the TMC discussion board mentioned that State Farm , AllState and Geico were top rated but the website did not specify by region. I switched from Geico ( was very happy with their customer service ) mainly because Liberty Mutual offers Better Car Replacement pkg.