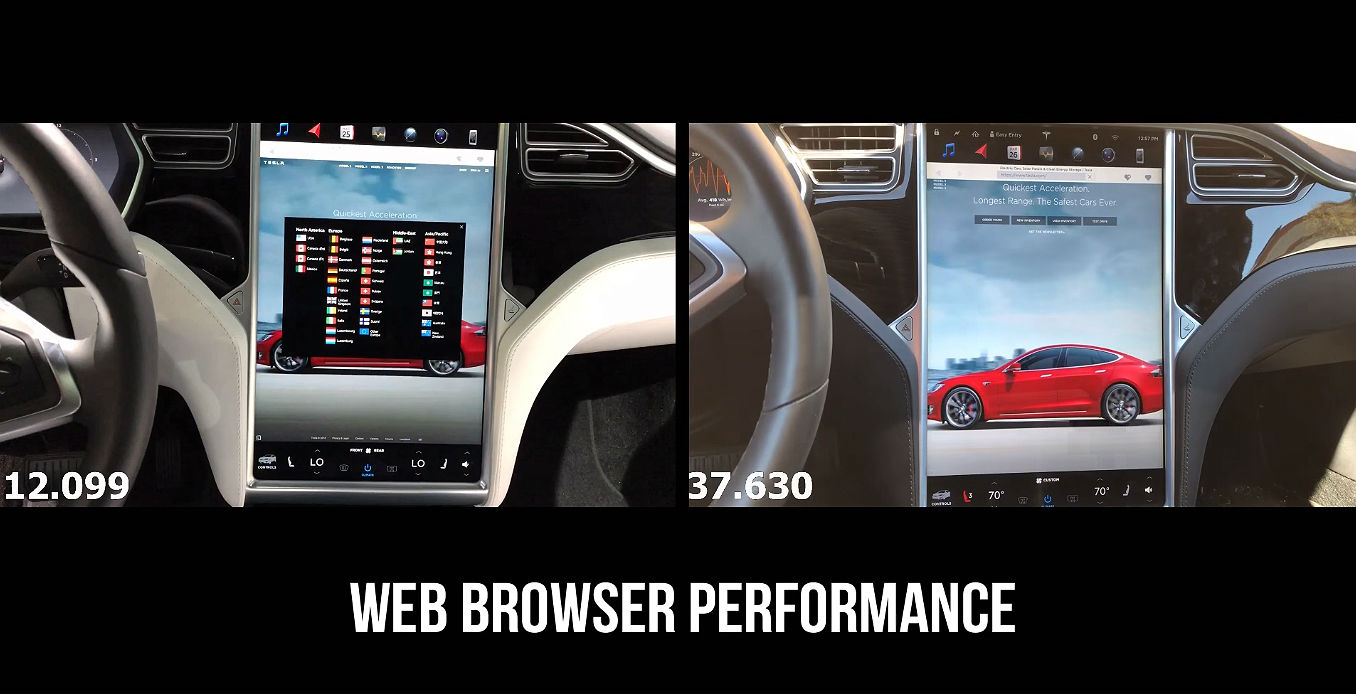 Tesla’s new Media Control Unit for the Model S and Model X was recently put through a controlled test against the company’s old MCU. The video, recently uploaded by My Tesla Adventure on YouTube, showed that the new MCU was around twice as fast as the NVIDIA Tegra-3-powered units on Tesla’s older vehicles.

The controlled test covered four different features of the media control unit — destination navigation, vector map responsiveness, dash navigation button speed, and of course, the built-in web browser. Both vehicles were hooked up to the same Wi-Fi network, putting the electric cars on even ground.

The first test involved destination navigation, with the Tesla enthusiast instructing both cars to navigate to Tesla’s delivery center in Marina Del Rey, CA. The new MCU was able to calculate the route, suggest charging stops, and set the destination in 9.27 seconds. The older MCU unit displayed the same data in 20.73 seconds.

Zooming in and out of the electric cars’ vector maps was roughly twice as fast in the newer MCU, with the newer unit being able to zoom out to the US map and zoom in back to the vehicle’s location in 27.97 seconds. The older MCU took 54.59 seconds to accomplish this task. My Tesla Adventure, however, noted that the true difference-maker with the old and new MCUs was the responsiveness of the updated media control unit.

“When testing the manual map navigation with vectoring, I noticed that it was hard to navigate with the old MCU because of the delay in response times from my finger inputs and the responsiveness of the screen. So it resulted in me kind of sliding all over the place on the map and going to places I didn’t intend to go.”

The difference in the old and new MCU’s speed when navigating through the dash buttons was less prominent. As could be seen in the video, the new unit was slightly faster than the new MCU, but the older media control unit was still fast and responsive. The cars’ web browser, however, showed the biggest difference in performance and speed. Loading Tesla.com from Google.com took the new MCU 12.10 seconds. The older media control unit, however, took a whopping 48.32 seconds before it was able to load the official Tesla website.

As we previously noted in a report, a Tesla spokesperson has confirmed with Teslarati that hardware changes to the onboard displays of Model S and Model X vehicles have been initiated by the company as part of Tesla’s continuous effort to introduce hardware and software improvements to its fleet over time.

The improvements to the car’s internet browser are quite noteworthy, especially since it has been teased by Elon Musk in the past. Back in December, Musk admitted that the Model S and X’s browsers were indeed “terrible,” and assured the Tesla community that “major browser upgrades” would be rolled out to the company’s fleet of vehicles in a few months.

Watch the controlled test of Tesla’s old and new MCUs below.