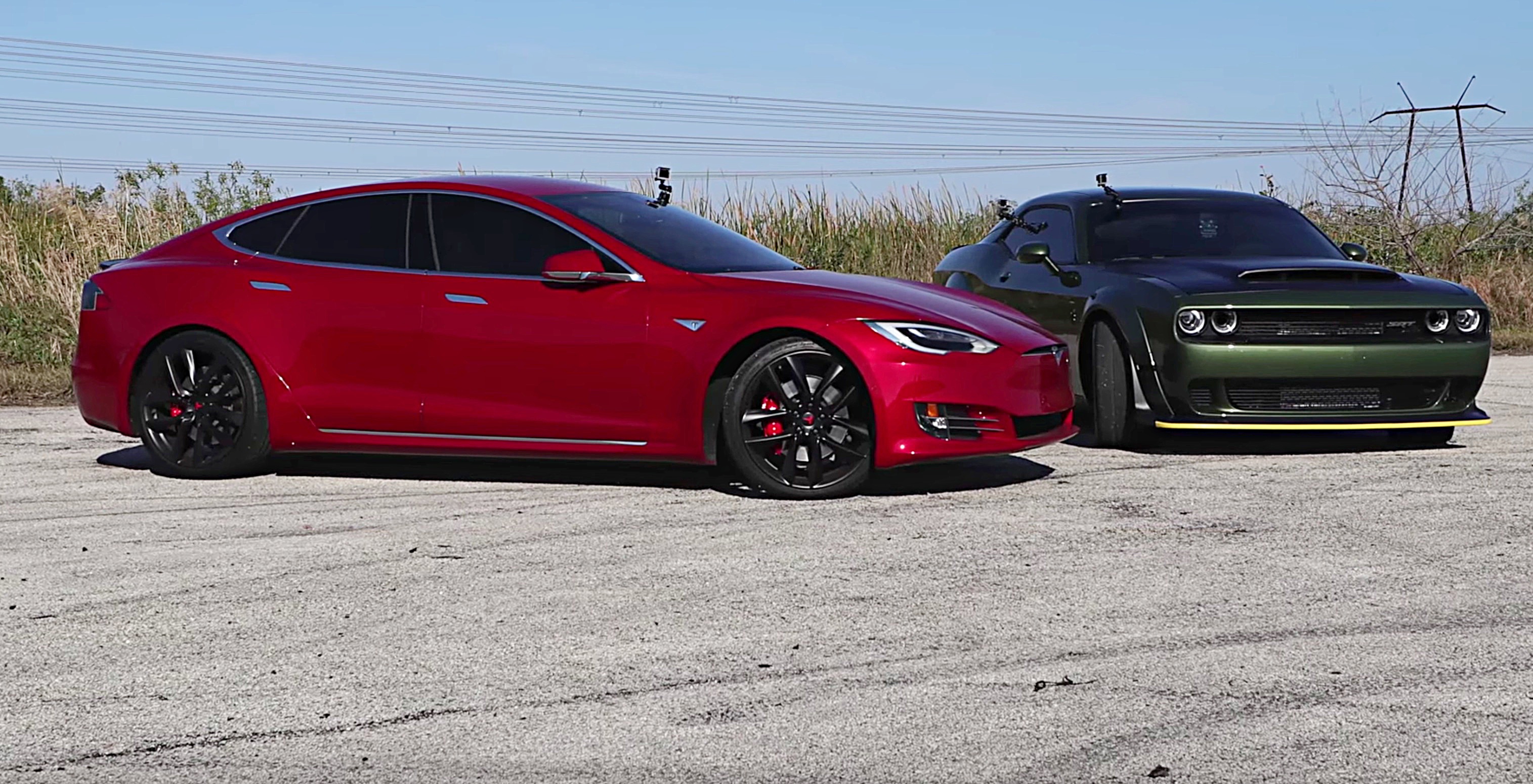 A Tesla Model S P100D recently raced a Dodge Demon on a drag and rolling street race, providing a brief idea about which car would come out on top in less-than-ideal road conditions. As could be seen in the video of the race, however, the Demon’s own hubris became its undoing, and it finished both races staring at the taillights of the Model S P100D.

The video of the Model S P100D vs. Dodge SRT Demon was uploaded by YouTube’s drag racing enthusiast, DragTimes. Brooks, the owner and host of the channel, initially believed that the Demon would have no problems overtaking his supercar-beating P100D, considering its raw power. As noted by the YouTube channel’s host, however, the owner of the Demon opted to change up the car a little bit, replacing the ICE monster’s OEM rear tires with a pair of Hoosier slicks. Racing slicks are perfect for the drag strip, but on everyday roads, they’re pretty much a hit-or-miss.

On paper, the Dodge Demon looked every bit like a car that is designed to dominate on the quarter-mile. The American muscle car is equipped with a 6.2-liter Supercharged V8 engine that makes 808 hp. The 4,280-pound, rear-wheel-drive vehicle is paired with an 8-speed automatic transmission. The owner of the Demon in DragTimes’ video gave his vehicle a Pump Gas Tune, however, in addition to the aforementioned Hoosier slicks for the rear wheels.

In comparison, the Model S P100D is equipped with dual motors that produce 920 ft-lbs of instant torque and 588 hp to its wheels. The 4,900-pound electric car is also all-wheel-drive, enhancing its traction and keeping the immense amount of torque from its electric motors under control.

Prior to the start of the race, the owner of the Dodge Demon opted to do some launches, seemingly showing off the car’s raw power. The driver of the ICE monster also opted to do some donuts for good effect, which, as Brooks immediately observed, resulted in the Hoosier slicks losing a lot of rubber. By the end of the donut-making, tire-shredding session, the Demon’s rear tires did not look good.

The race between the Tesla Model S P100D and the Dodge Challenger SRT Demon was quite painful to watch, if you’re a Demon fan. As soon as the race started, the full-sized electric family sedan shot off, thanks to its Ludicrous mode and instant torque. The Tesla pulled, and then it just got farther and farther. The Demon, on the other hand, could not control its power, and by the time its tires found some traction, the P100D was already several car lengths ahead.

A rolling race between the Model S P100D and the Dodge Demon was not that much better for the ICE car. As soon as the driver of the Demon floored the accelerator, the muscle car spun its wheels before gaining traction. By the time it hit its stride, the Tesla was already far ahead.

Overall, DragTimes’ recent video is a lesson in hubris. Had the driver of the Demon opted to keep the car’s OEM rear tires on, the results of the race would have been very different. Had the Demon’s owner decided against the donut-making session, the Hoosier slicks would have gripped the street just a little bit better. For now, however, DragTimes’ Model S P100D could walk away with a win against an ICE car that was made to dominate in a straight line.

As we noted in a previous report, the Model S P100D previously won Motor Trend’s World’s Greatest Drag Race, beating out vehicles such as the Aston Martin DB11, the Mercedes-AMG GT-R Nismo, the Porsche 911 Turbo S, and the McLaren 570GT. During that race, many of Motor Trend’s YouTube followers lamented that the Dodge Challenger SRT Demon should have been included in the event, and it would have handily beat the Model S P100D. As proven by DragTimes’ recent video, however, the Demon could probably beat the Model S P100D in the quarter mile, but it would have to control its power first.