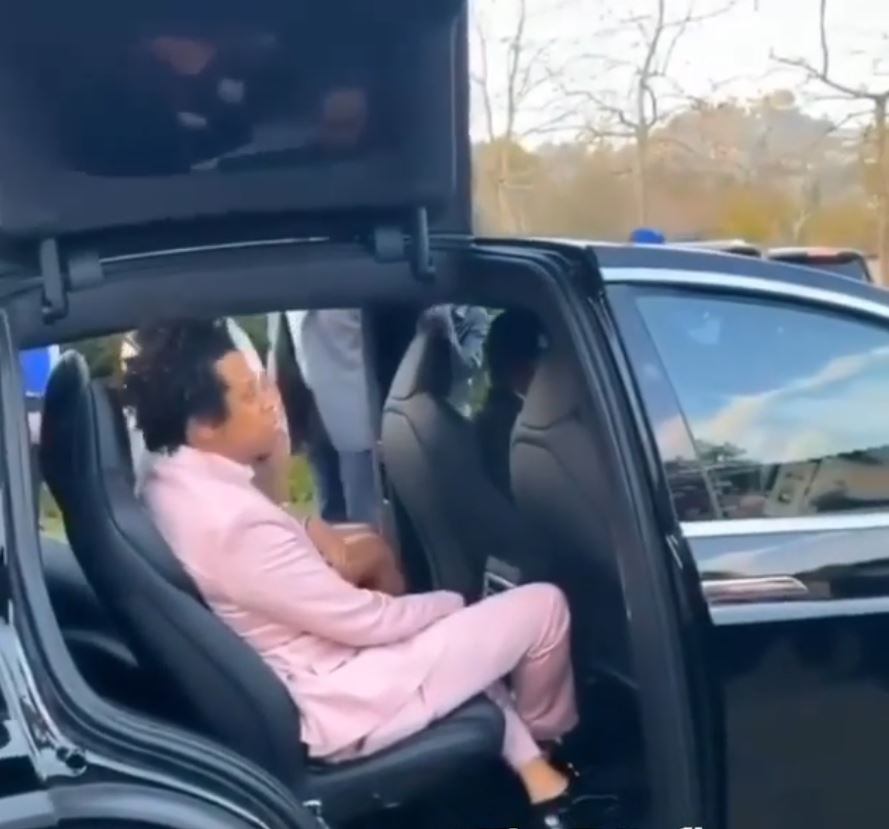 Jay-Z and Beyoncé skipped the 2020 Grammys but the entertainment industry’s power couple hosted the annual Roc Nation’s The Brunch and were spotted leaving the venue on a sleek Tesla Model X.

Jay-Z’s entertainment agency Roc Nation hosted the star-studded pre-Grammy event on Saturday in Los Angeles. Bey wore a blue mini dress with low V neck perfectly while Jay-Z was the most fashionable in his mauve suit (yes, don’t call it pink). They did not have to do anything to stand out from the rest as they exuded music royalty, of course, but the electric vehicle community cannot miss that the two biggest stars left the party in a black all-electric SUV.

The Model X waited for the music industry giants with its Falcon Wing doors wide open. The legendary rapper hopped onto the right side of Tesla’s flagship SUV while he poshly corrected someone that his suit wasn’t pink, all while Beyonce was escorted to the other side of the vehicle by her bodyguard.

The music industry’s elite attended the event that some consider even bigger than the Grammys itself. Jay-Z and Beyoncé welcomed the likes of Diddy, Rihanna, Usher, DJ Khaled, Kelly Rowland, John Legend, and many more in the posh mansion where Roc Nation’s The Brunch was held.

Why the couple opted to ride a sleek Model X to one of the biggest events of the year is no surprise. Both award-winning artists are known to wrap their hands around worthy causes such as Beyonce’s focus on climate change.

“During the time where it’s impossible to watch the violence or racism in this country, just when you think it couldn’t possibly get worse, natural disasters take precious life, do massive damage and forever change lives — leaving behind contaminated waters, flooded hospitals, schools and nursing homes,” Beyoncé said during a benefit telethon for the victims of hurricanes in 2017.

The Tesla brand has a loyal community who believes in Elon Musk’s mission to achieve real sustainability, but celebrities such as Jay-Z and Beyoncé can definitely give it a good push and help get the message across to more people.

Check out the short video footage of Jay-Z and Beyonce boarding the Tesla Model X as they leave the Roc Nation’s The Brunch: