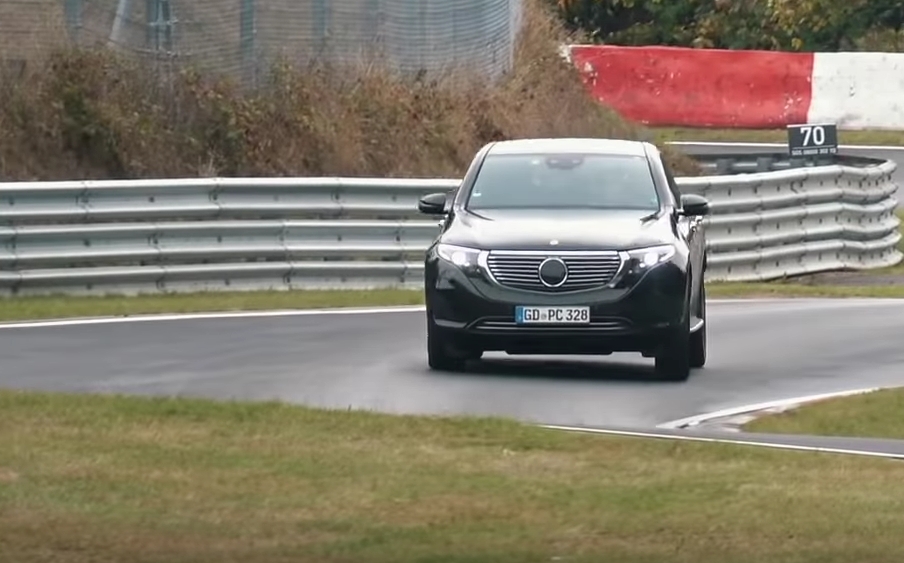 German automaker Mercedes-Benz seems to be ensuring that its first all-electric vehicle, the EQC, will be an SUV that can deliver some serious performance. The vehicle might have raised some eyebrows immediately following its launch due to questions about its range and efficiency, but if a video of the SUV taking on the Nürburgring Nordschleife is any indication, it appears that Mercedes-Benz’s luxury EV can be a pretty fun car to drive.

A video of the SUV doing continuous testing was captured by YouTube auto enthusiast Automotive Mike. In the clip, the EQC could be seen hugging the track pretty well. The vehicle’s quick acceleration thanks to the instant torque of its two electric motors was quite evident too. For an SUV that’s large and almost bulky compared to competitors like the Jaguar I-PACE and the Tesla Model X, the Mercedes-Benz EQC seems to be surprisingly nimble.

If there was anything that could be noticed from the video of its Nürburgring runs, though, the EQC appears to exhibit a notable amount of body roll, particularly when cornering at high speeds. While this might allude to the EQC having softly-tuned suspension, such a setup nevertheless points to the all-electric SUV offering its passengers a comfortable ride.

Mercedes-Benz unveiled the EQC early in September, with Daimler AG Chief Executive Officer Dieter Zetsche boldly declaring in front of an audience at Stockholm, Sweden, that the EQC symbolizes the company’s commitment to the electrification of the transport industry. The Daimler CEO even noted that there simply is “no alternative to betting on electric cars.”

The Mercedes-Benz EQC looks and feels like a traditional vehicle from the veteran luxury carmaker, being plush with luxurious accents and designed with understated lines and an aggressive stance. The specs of the car are quite decent, with two electric motors that produce 402 hp and 564 lb-ft of torque. Despite its size and bulk, the EQC is capable of accelerating from 0-60 mph in 4.9 seconds and reaching a top speed of 112 mph. The EQC also has a towing capability of 3,968 lbs.

Inasmuch as the performance specs of the vehicle are impressive, though, the EQC’s battery and range were met with some raised eyebrows from the auto community, after initial press materials quoted the vehicle’s range from its 80 kWh battery pack at just ~200 miles. Mercedes-Benz later corrected the information, stating that the EQC actually has a range of 279 miles per charge.

When the vehicle was announced, Mercedes-Benz announced that it is expecting to start the production of the EQC sometime in 2020. In a later report, though, the legacy carmaker stepped back from its estimates, stating that it was adopting a gradual rollout for the vehicle instead. Speaking to Europe Auto News, Mercedes-Benz head of production and supply chain management Markus Schaefer noted that the vehicle’s more deliberate rollout was due to the company’s concerns about the new technologies in the EQC, particularly in its battery.

“We want to be sure we deliver Mercedes quality from day one in all aspects, and we have to watch the warranty side for customers as well. We don’t want customers ending up at the mechanic later. Slowing down the ramp-up is a tool to make sure we do it right, to address all the unknowns that an electric car brings,” he said.

While electric car enthusiasts who wish to acquire the Mercedes-Benz EQC might end up waiting a little longer for the vehicle, Schaefer nonetheless stated that the company is confident it can ramp the production of the all-electric SUV quickly. The veteran carmaker plans to manufacture the EQC at its facilities in Bremen, Germany, and Beijing, China, on the same line as the company’s gas-powered SUVs such as the Mercedes-Benz GLC.

Watch the Mercedes-Benz EQC take on the Nürburgring Nordschleife in the video below.