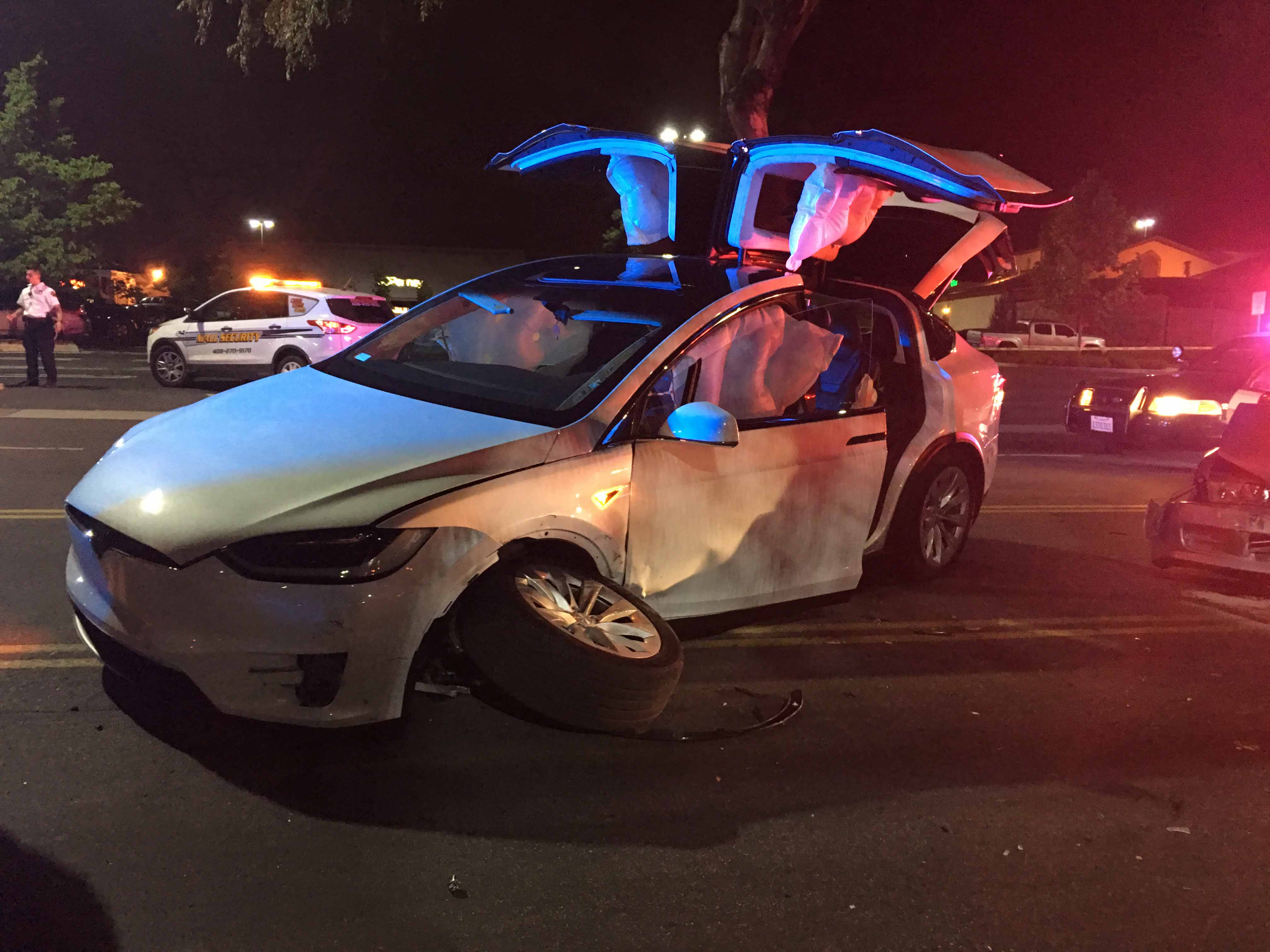 A groom-to-be behind the wheel of Tesla Model X is thankful to be alive after the vehicle was involved in a severe side-impact collision by a stolen vehicle that careened into the driver’s door of the all-electric SUV at 65 miles per hour.

The driver, an automation consultant for Tesla, rented a Model X for his wedding. After leaving the rehearsal dinner that took place the night before the wedding, the groom-to-be dropped off his fiancé and headed home. Then things took a turn for the unexpected. In a forum post entitled ‘I am alive today well BC of a Model X‘, the driver recounts:

“When I made my way out of the parking lot, I began to take a left turn onto the main street. Mid-turn, I noticed a silver car quickly approaching the driver’s side of the vehicle (I later learned that they were going over 65mph on a private road). I had no time to react, since the driver came from a blind spot on my left. At this point, it looked like the driver had no intention of slowing down, and I immediately thought that I was either going to get badly hurt or potentially die.

I quickly braced and gripped the steering wheel as I was pounded by the silver car, sending me over 20 feet away from my starting point. With the impact, all of the airbags deployed, instantly leaving me in shock. The outgassing of the airbags caused the car to smoke, making it difficult to see. I reached for the door handle with my right hand, but was not able to open it. Seeing no other option, I kicked open the door and was able to escape the vehicle. As I walked outside, I immediately saw the police chasing after the culprits driving the silver car. I looked around, dazed, and ended up falling to the ground. I am unsure of what happened next, but all I can remember is hearing voices from the people nearby, and Nancy screaming my name. When I came to consciousness, I was being helped by the police, paramedics, and fire department. The silver car was a mess, but the Model X only suffered a broken axle and bent wheel.”

An impact from a 3,000 pound Honda Civic traveling at 65 miles per hour into a nearly stationary vehicle would normally end with disastrous consequences but the Model X was able to sustain the impact by cocooning the driver with twelve airbags: head and knee airbags in the front, two side curtain airbags, four seat-mounted side airbags, and two door-mounted airbags, putting the safety-first design to the test in ways nobody would ever want to have to experience. We saw a similar occurrence last year when a Tesla Model X saved the life of an entire family and their pet after it was involved in a horrific traffic accident at an intersection. “I waited 4 years for this one and would wait 4 more if that is what it took to protect my family like this.” said the driver of the Model X at the time.

The groom-to-be that was saved in this latest accident had previously worked with Tesla as an automation consultant for the company in the stamping, body and paint production line, and worked directly with engineers involved in the Model S, X and Model 3. Having worked with many of the people who designed the vehicle instilled a respect for Tesla and its vehicles that was enough for him to choose a Model X as the vehicle to be used for his wedding.

“I wanted to write this to you in hopes that this raises visibility to the management chain at Tesla. I can’t thank Elon Musk, Tesla, and the team enough for what they do and want them to know that their car saved my life. While I also believe that I am still alive because of divine intervention, being in that car was definitely my shield and protector. I have made it a short term goal of mine to sell my cars and buy a Tesla as my next vehicle. That car saved my life. Thank you for your time and I hope this message gets passed through to everyone, especially Elon.”

This story highlights a critical differentiator between Tesla and other auto manufacturers. Tesla and Elon Musk have always put safety first which the company puts as a main focal point at each new vehicle reveal. This focus on safety led to the development of vehicles with larger crumple zones up front (the frunk) than any comparably-sized vehicle, better coverage from integrated airbags and a greatly reduced risk of rollover due to the floor-mounted battery. 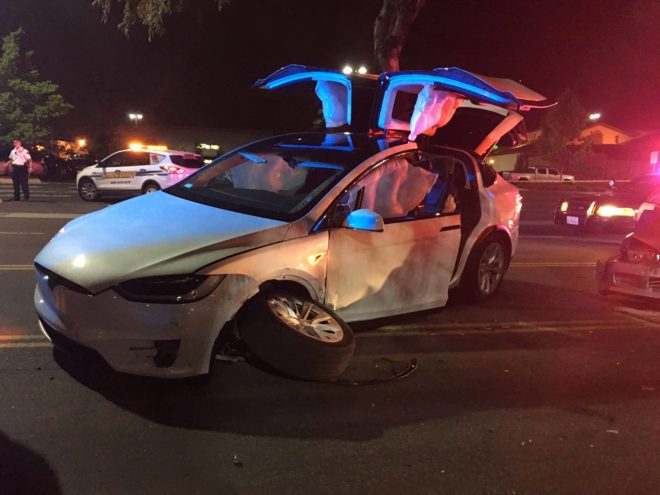 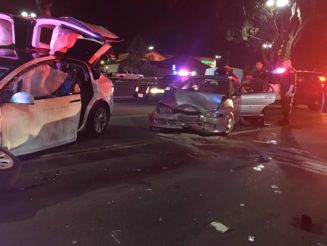 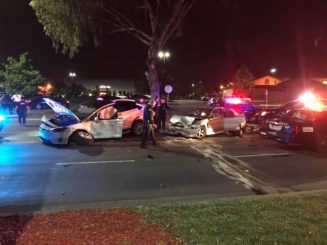 Tesla summarizes the safety features of the Model X on its website:

Model X is designed with safety as the first priority. The floor-mounted battery lowers the center of gravity so that the risk of rollover is about half that of any vehicle in its class. The battery structure strengthens Model X against side impact intrusions. And without a gasoline engine, the large front trunk acts as a giant impact-absorbing crumple zone. Although the National Highway Traffic Safety Administration has not yet conducted crash testing on Model X, Tesla’s own internally conducted crash testing indicates that Model X should be the first SUV to receive the highest safety rating in every category.

Building on the world-class safe design of Tesla vehicles, a layer of active safety features that are included in every Tesla sold take this to the next level with features like Automatic Emergency Braking and side impact collision warnings.

The safety-first culture at Tesla extends beyond its vehicles and into the next generation of products the company is producing – its factory. In its recent blog post about safety, Tesla shared how a safety-first focus underpins the entire design process even going so far as to look for ergonomics concerns in virtual mock ups of its manufacturing lines before they are built.

Tesla is revolutionizing the way humans get around and at the same time, rethinking the safety systems that keep all the people in its care in ways that ultimately benefit everyone. The driver of the Model X in this accident has made it a short term goal to acquire a Tesla as his personal vehicle. That should speak volumes to anyone who has been in an accident, lost someone in an accident or wants to keep themselves and those they travel with as safe as possible.