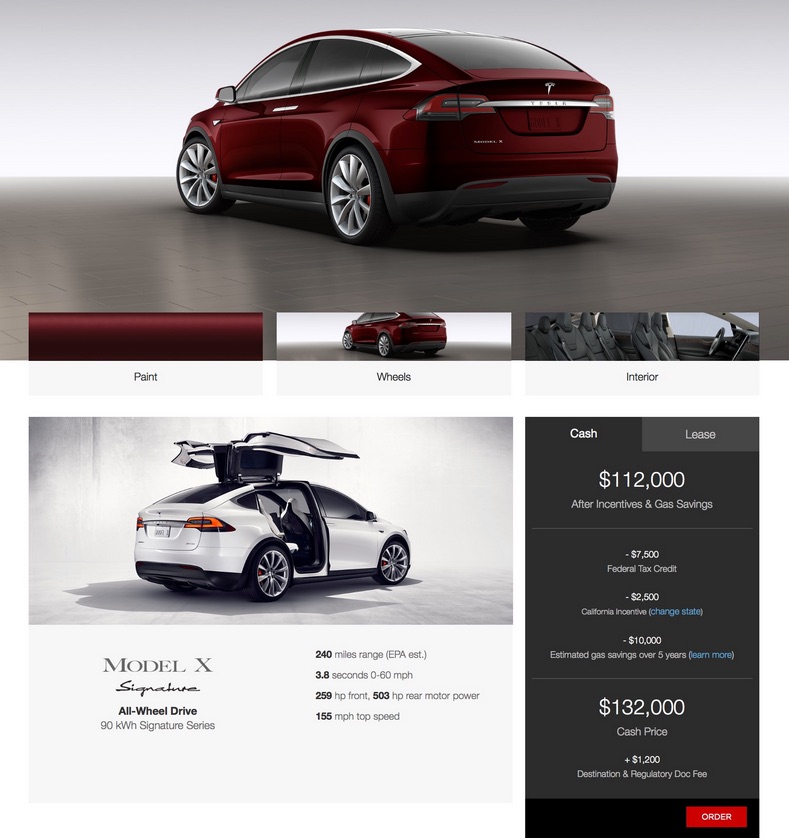 Model X pricing is getting a lot of attention in the press these days. Most focus on the $132,000 cost of the Signature Series, not the $88,000 base price.

The press has been focusing much of its attention on Model X pricing these days, but what the media seems to be missing the mark on is the fact that the starting base price for the electric crossover is not $132,000 – it will likely be far less that that.

Screenshots of the Model X Design Studio began circulating across media outlets when select Signature Edition reservation holders were first invited to begin configuring their vehicles. What was captured in the screenshots were the first images revealing the Model X tow package and the configurable seven and six person seating option. However, what people took notice of was the $132,000 price tag prominently displayed above the “Order” button. Not many people realize that the $132,000 price tag is for Tesla’s P90D Model X Signature Series edition, which comes equipped with a higher performance motor (hence the “P” badging) and all options that one can possibly have.

According to our friend Daniel Sparks at The Motley Fool, “Buying a Model X without the “P” preceding “90D” is where the real savings will come. If the way Tesla structures pricing for Model X mirrors Model S, choosing not to order a Performance version of the vehicle will save the buyer $20,000.”

With a Model S 90D starting price of $88,000, lower cost versions of the Model X could start as low as $93,000 according to Elon’s tweet. A combined savings of $40,000 below the $132,000 Model X Signature Series base price can likely be had if one were to further reduce the number of options selected.

Daniel Sparks points out that, even without the performance enhancements, the standard 90D Model X is plenty fast. It takes a second longer to accelerate to 60 mph, (4.8 seconds) but prospective customers might find value with that level of performance while being able to take a $20,000 haircut off the Signature Series pricing.

Elon says more affordable versions of the Model X – “something like a 70” – are planned for the future.