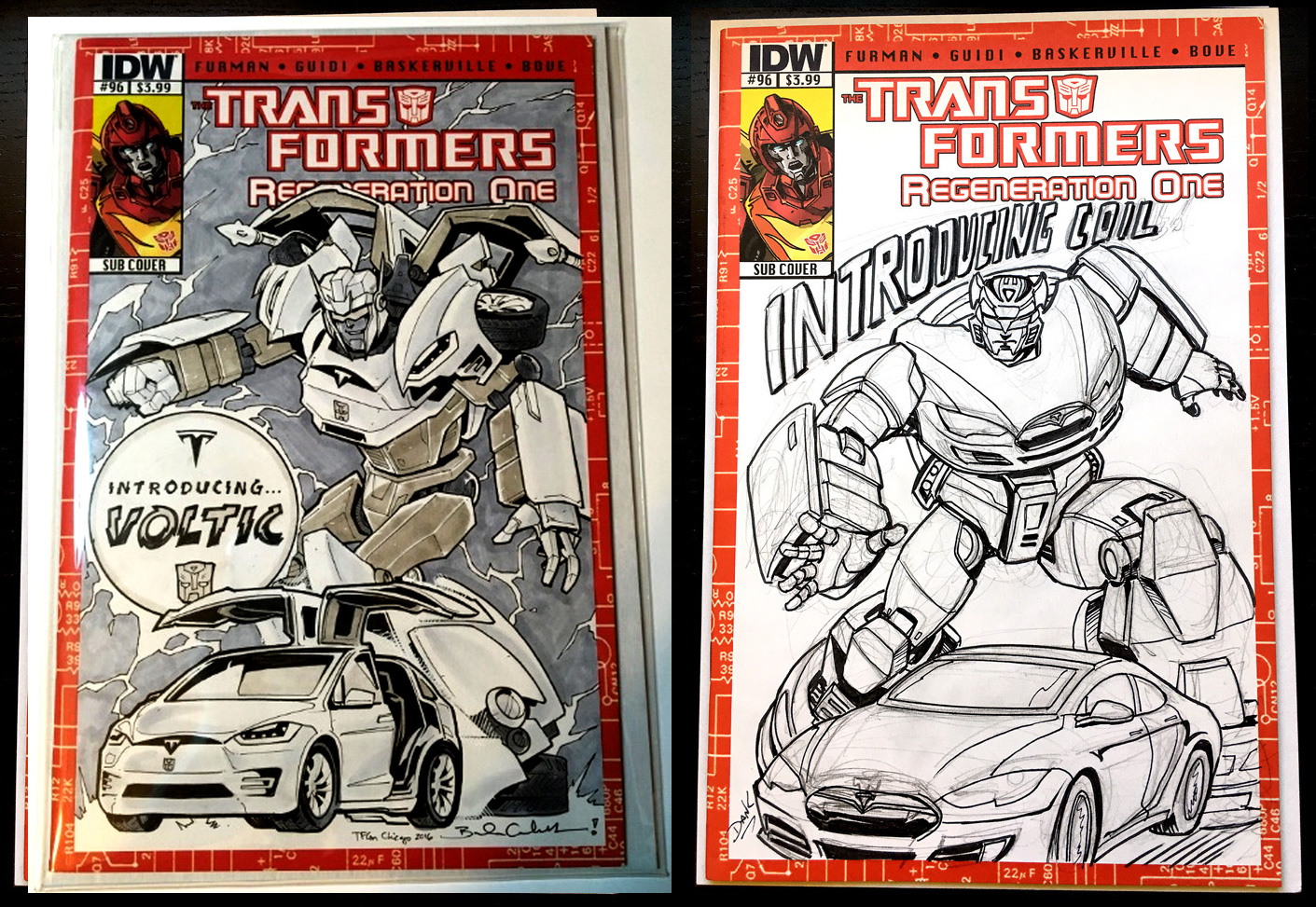 Die hard Transformers fan and c0host to the TransMissions podcast, Youseph Tanha, surely has the most unique one-of-a-kind Tesla Model X on the planet. Equipped with its own Falcon Wing missiles – that’s right, missiles – and the ability to transform into a two story tall robot, Tanha’s Model X which goes by the name ‘Voltic’ is undoubtedly more than meets the eye. At least in comic book form.

We caught up with Tanha, who goes by the name Yoshi, to learn more about his unique project that would immortalize Tesla’s Model X and Model S as a generation one Transformer.

How did this project come about?

I’m an old school G1 Transformers fan. (G1 is how a person refers to the original Transformers toys, cartoon, animated movie, and comic books of the 80s.) I believe it was in 2002 that comic book companies started to experiment with releasing comic books with blank covers, (also known as sketch covers). The idea being that comic book fans would buy these blank comics and take them to comic convention where comic artists would do up a sketch for them for a fee.

In recent years these blank covers have become more popular. I don’t believe we’ve come close to the apex of their potential yet. I put together a short video talking about this on my blog.

From these 21 issues, 4 were blank sketch covers. The one used for the ‘Voltic’ project is issue 96.

I’ve wanted to commission a Transformers comic book artist for the ‘Voltic’ project for nearly a year. For me it was just finding the right Transformers artist and time.

Later this month, I’ll be attending a Transformers Convention (TFCon) in Chicago. This year’s TFCon has round up an impressive number of Transformers comic book artist, including Brendan Cahill. When I found out Mr. Cahill would be attending TFCon, I contacted him to request a comic sketch cover art commission that I could pick up at the convention. This way I not only get a commission piece I want, but I also get to shake hands with the person who created it.

In my original e-mail to Mr. Cahill, I pitched two ideas to him for the commission. He chose the Tesla idea. Here is the pitch.

“Custom G1 Transformer. Modeled after the TESLA Model X car. In both car and bot mode. I have an OptimusPrime photo attached to this e-mail to show you what I’m going for as far as showing both modes at the same time. On the cover I would like written, “Introducing Voltic”. I want to make sure that the drawing shows the TESLA and Autobot Logos in appropriate places. I’m Also attaching a couple of TESLA Model X images for reference. I would like the vehicle mode to show off one, if not both, gull wing doors.”

That was it. The correspondence afterword dealt with the cost of the work and where to mail the blank comic book too. Didn’t really give him any other impute on the design. He just uses my references as a guide and it turned out the way I wanted it to.

The name, ‘Voltic’ comes form the video game, Grand Theft Auto 5 of which I’m a big fan of. The game has a parody of TESLA called ‘COIL’ and their car model is the Voltic.

I also want to add that earlier in the year I had commissioned a different artist to make a Model S Transformers.

Is this officially recognized by IDW and will it make it into print?

Nope. Not at all. But wouldn’t it be cool if it was?

The character is original to myself and Mr. Cahill. As far as I know, IDW Publishing has no plans to make a Transformer character model after a Tesla vehicle. I imagine if they wanted to do this they would be requires to pay Tesla for the rights to use their vehicle’s likeness. I also don’t think it fits with the current direction that IDW has taken characters and story in their current on going transformers comics.

What are some of the attack and defense mechanisms that ‘Voltic’ has over other Transformers?

I have put zero thought into this. Originally, the transformers story takes place in the 80s. The Transformers crash landed on earth and their alt modes (Vehicle modes) where based on the technology of the time. Optimus Prime is a flat nosed MACK Truck. Bumble Bee is a VW Beatle. Star Scream is a F-22 Raptor, and so on. Its fun to think if the story took place in 2016 that one of those Transformers would have been a Tesla. it’s almost silly to think that wouldn’t happen today.

Mr. Cahill clearly had fun with this project and added some missiles to the falcon wing doors. But I’ve put zero thought into Voltic’s unique abilities. Mostly because I probably would end up writing 5 pages about it if i started. I can tell you, like all Transformers, he would have an internal repair system in place and advanced communications abilities.