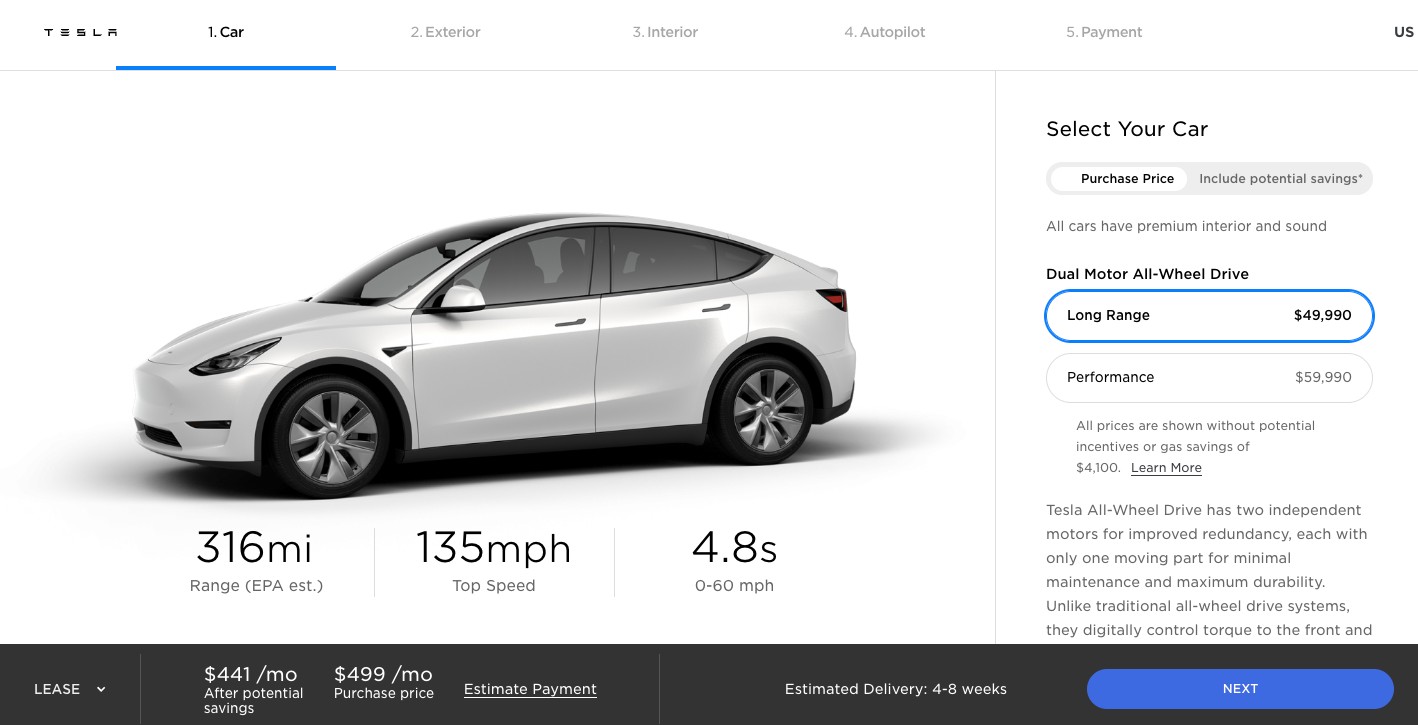 The Tesla Model Y is the electric car maker’s more affordable crossover, but it is still a premium priced vehicle that costs $49,990 cash or about $699 per month on a standard 72 month loan. Just recently, however, Tesla has opened leasing options for the Model Y, which allows customers to lease the vehicle for 36 months at an affordable price of $499 per month.

The Model Y Dual Motor AWD is quite a lot of car for $499 per month. It’s a pretty large and competent vehicle on its own right, with its cargo space of 68 cu ft and its range of 316 EPA miles per charge. In true Tesla form, the Model Y Dual Motor AWD is no slouch either, with its 0-60 mph time listed at 4.8 seconds and its top speed rated at 135 mph. That’s well within muscle car territory.

The Tesla Model Y is expected to be the best selling vehicle in the company’s lineup due to its crossover nature. Crossovers, after all, are a particularly popular segment, and it is not showing any sign of decline. With this in mind, the Model Y, which slots right in with other popular crossovers in the market like the BMW X3, could become an ideal first EV for customers, especially those with families but are also particular with performance.

What is rather interesting is that the Model Y lineup today is only comprised of the vehicle’s two more expensive trims. So far, Tesla is only offering the Model Y as a Dual Motor AWD vehicle. Plans are still underway to release the all electric crossover as a Rear Wheel Drive unit, with CEO Elon Musk recently stating that Tesla will be introducing a Long Range RWD variant with well over 300 miles of range. The RWD Model Y will likely be even more affordable than the Dual Motor AWD option.

Similar to the Model 3, it appears that the Model Y leasing program does not allow customers to purchase the Model Y at the end of the 36 month term. This could be quite inconvenient for some customers, seeing as Teslas actually retain their value in the second hand market very well. That being said, Tesla has noted when it launched the Model 3 leasing program that the vehicles coming off the 36 month lease period are intended to be used for the company’s upcoming Robotaxi fleet.

Using off lease vehicles for its Robotaxi Network is actually a pretty good strategy for the electric car maker, considering that the company would need a fleet of vehicles if it wants to launch a ride hailing service that could be competitive with mainstays such as Uber and Lyft. Of course, Tesla would have to master its Full Self Driving suite before it could launch such a service, but the company seems to be optimistic about these prospects as well. Elon Musk, for one, has noted that he is quite optimistic about Tesla’s Autopilot rewrite, which should accelerate the improvement of the company’s driver assist features.