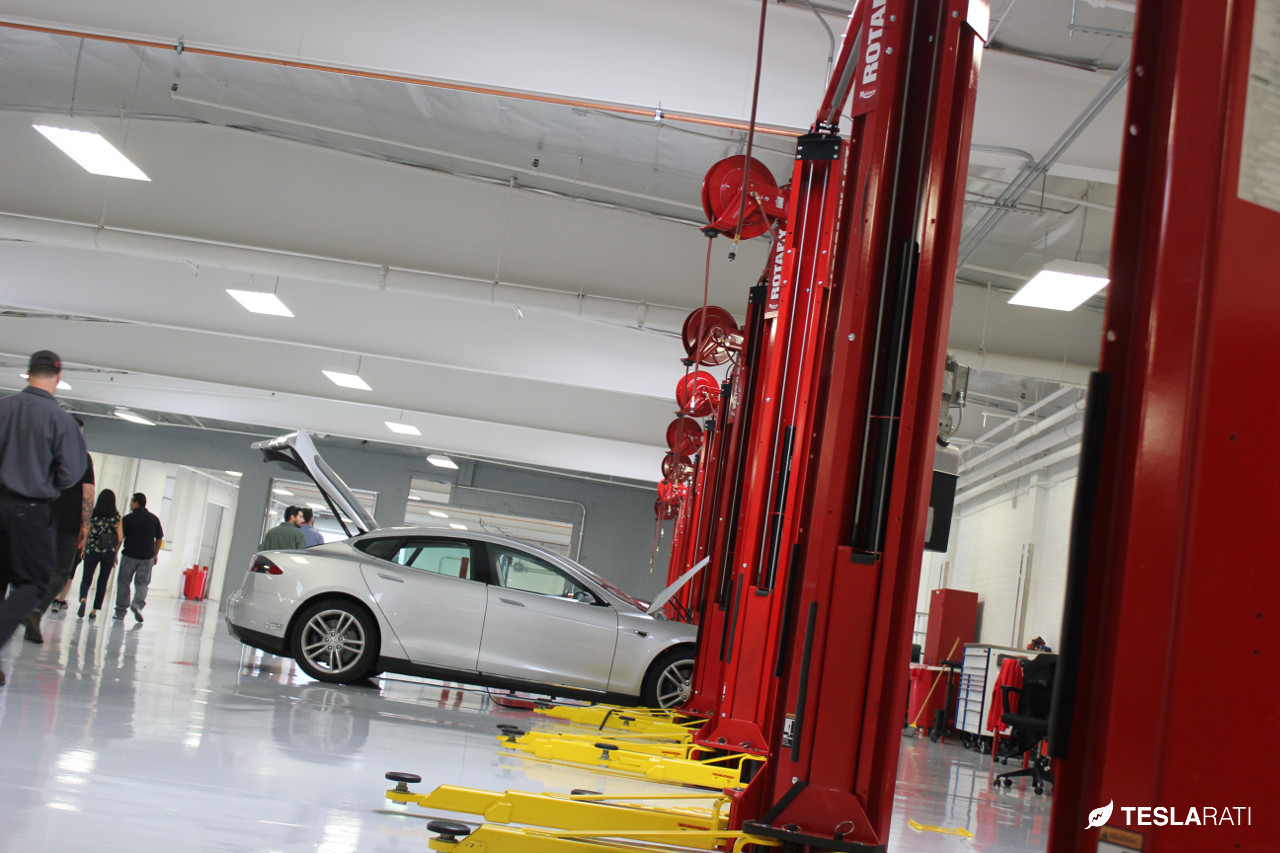 Before I mention the pit crew like experience, I do want to mention that one of the most awesome parts of the Tesla service experience is the offer to valet your car at home. During the earnings conference call with Elon Musk and team in early August, Musk mentioned that Tesla Motors service centers are implementing a Formula One pit crew approach for Model S owners here in the U.S and in China.

“So we actually bring the car and we kind of hit with a pit crew, like a Formula One pit crew. So instead of having one person per bay, the car gets slowly worked on over several days, it actually comes in and a team attacks it, and we’re constantly improving the tools and the metrics to say, how can we get the car perfect as fast as possible. We actually bring in people from Formula One to help with the training on this. And I think there’s a real opportunity to revolutionize the way service works.”

So how is Tesla Motors new Formula One approach working and what has the service center experience been, in general, for the young automaker?

Recently, I interviewed Model S 85 owner, David Zygmont, about his trips to Tesla Motors service centers over the last two years, the Model S service package and has he seen this Formula One approach in action. The slightly edited interview is below:

Grant Gerke: What actually made you decide to buy the service package, which includes 4 service visits in four years or 50,000 miles?

David Zygmont: So being an early adopter, being a really early product for a really young company, I think it was pretty realistic that there would be some need for service and I had hoped like, ‘Wouldn’t it be great if this all electric car would be really maintenance free, free of some real critical headaches.’ However, I should really expect some software glitches, right? I mean this car runs software for everything and I was expecting there to be quite a number of those initially.

And, there’s no ambiguity in the contract as it ends at 50,000 miles or four years, whichever you reach soonest. So, I’m going to get maximum value because I’m almost at 20,000 to 25,000 miles a year, somewhere in that range. I need to do it every 12,500 to get maximum value of this, I’ve already been three times for a service checkup.

Grant Gerke: What’s your service center experience been like, so far?

David Zygmont: I’ve had a pretty long relationship, a number of visits with Tesla service and for the most part, the people are really great. I really like working with people, especially the group that I worked with over the last nine to twelve months.

However, they don’t really share a lot in terms of documentation with these annual checkups. When you look at the paperwork, it says: We did an annual service and the parts used are batteries for the fobs and wipers for your windshield.

Some of those visits have also included a number of other line items that I feel like some would happen whether I have the annual service or not because some of them were kind of classified as these service bulletins, which I think is very standard industry practice to say: hey, when your car is in, if we see this as a concern, because your VIN is labeled as… it may have this concern. So they look and if they see the concern, they fix it, and I’ve been very appreciative.

Other non-scheduled service center visits have included parts replaced and they’ve all been driven by some sort of failure and/or observation on my part that says this doesn’t feel right, and Tesla Motors has said either: We agree and made the repairs or they’ve said no to and I totally think that’s reasonable. An example would be Tesla considers it a wear issue, but some would also consider a design issue about why the wear is happening.

Also, I think the service center communication systems and behaviors that’s been implemented as a team have greatly evolved. Early on, I had services where I didn’t hear for three days and I’m like: what’s happened to my car?

But now it’s just amazing service as I receive multiple text message updates per day when they have my car. All my recent service has been same-day stuff and they’ve done it really quickly, maybe that’s reflective of their Formula 1 approach. Grant Gerke: Speaking of Formula One, what about this pit crew approach? Any signs of it in recent visits?

David Zygmont: Before I mention the pit crew like experience, I do want to mention that one of the most awesome parts of the Tesla service experience is the offer to valet your car at home. So, it entails the service center coming to your house and bringing a Model S loaner and leaving it with you. Then they bring it back all fixed, serviced and whatever that’s been done with it. No one else does that. So, I just want to quickly make mention of that.

But sometimes it actually works better in my day if I could just exchange with (a car) the service center on my way to work. Recently, I was waiting to pick up my car after some service and a car had just come off of a flatbed in front of the Highland Park shop. I watched as a pit crew went to work on that car immediately. It was four service guys–four technicians–and someone was in the driver seat with their laptop in front of them, plugged in on the side port of the Model S. Other team members had covers off, under the hood and they pulled some covers to access some different parts in the front area.

It was really clear that this was like all hands on deck, let’s triage this real fast. I thought that was pretty cool.

What about everyone else? What were some of your expectations for Tesla Motors service centers?

I want to thank Dave for his time and be sure to check out my podcast with Dave Zygmont’s road warrior adventures in his Model S 85 across the supercharger network, “Podcast | Dial-in a Model S Road Trip with These Tips.“