Tesla appears to be closing in on Elon Musk’s bold prediction that the electric car maker’s Full Self-Driving suite will be “feature-complete” by the end of the year. To become feature-complete, Tesla’s FSD suite must have the capability to navigate through city streets on its own, and it must be able to recognize stop signs, traffic lights, and other signages that it will encounter in inner-city driving.

A recent software update currently being released to the company’s fleet suggests that a feature-complete version of Full Self-Driving may indeed be rolled out to several members of Tesla’s early access program by the end of the year.

A number of Tesla owners with vehicles running the company’s NVIDIA hardware have started receiving the 2019.40.2 update. The update featured, apart from the usual improvements and bug fixes to Tesla’s software, a couple of features that will be extremely pertinent for inner-city driving. These are Adjacent Lane Speed Adjustments and Stop Sign Detection, two capabilities that would be invaluable for the company’s Full Self-Driving suite.

The following are the release notes for both of these features, as shared by the Tesla Riders Club on Twitter. 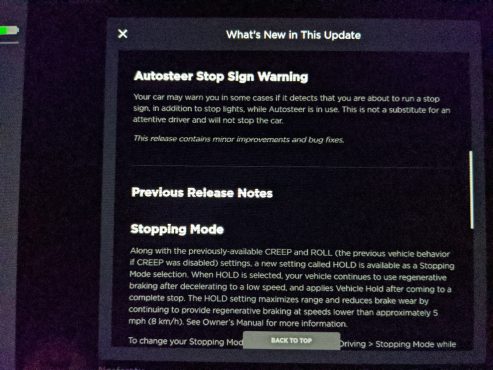 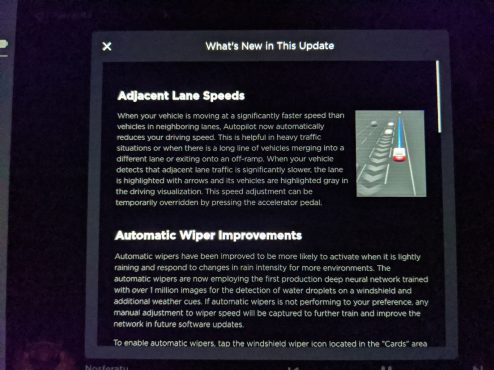 “When your vehicle is moving at a significantly faster speed than vehicles in neighboring lanes, Autopilot now automatically reduces your driving speed. This is helpful in heavy traffic situations or when there is a long line of vehicles merging into a different lane or exiting onto an off-ramp. When your vehicle detects that adjacent lane traffic is significantly slower, the lane is highlighted with arrows and its vehicles are highlighted gray in the driving visualization. This speed adjustment can be temporarily overridden by pressing the accelerator pedal.”

“Your car may warn you in some cases if it detects that you are about to run a stop sign, in addition to stop lights, while Autosteer is in use. This is not a substitute for an attentive driver and will not stop the car.”

Adjacent Lane Speed Adjustments will likely be very valuable for users of Tesla’s Navigate on Autopilot with automatic lane changes. This ultimately gives users a smoother experience while using Autopilot, while providing an additional layer of safety for drivers. Autosteer Stop Sign Warning is a great companion feature to a previously released feature that allowed Teslas to detect traffic lights and alert users if they are about to run a red light. The recognition of stop signs is also an encouraging improvement for the company’s Neural Network, which appears to be learning more and more of the intricacies of everyday driving.

Elon Musk has stated that he believes Full Self-Driving could be feature-complete by the end of 2019, and it would likely be rolled out to a select number of Tesla owners who are part of the early access program. Musk clarified what feature complete really means during the third-quarter earnings call.

“So feature-complete means it’s most likely able to do that without intervention, without human intervention, but it would still be supervised. And I’ve gone through this timeline before several times, but it is often misconstrued that there’s three major levels to autonomy. There’s the car being able to be autonomous but requiring supervision and intervention at times. That’s feature complete. Then there’s — and it doesn’t mean like every scenario, everywhere on earth, including ever corner case, it just means most of the time,” Musk said.