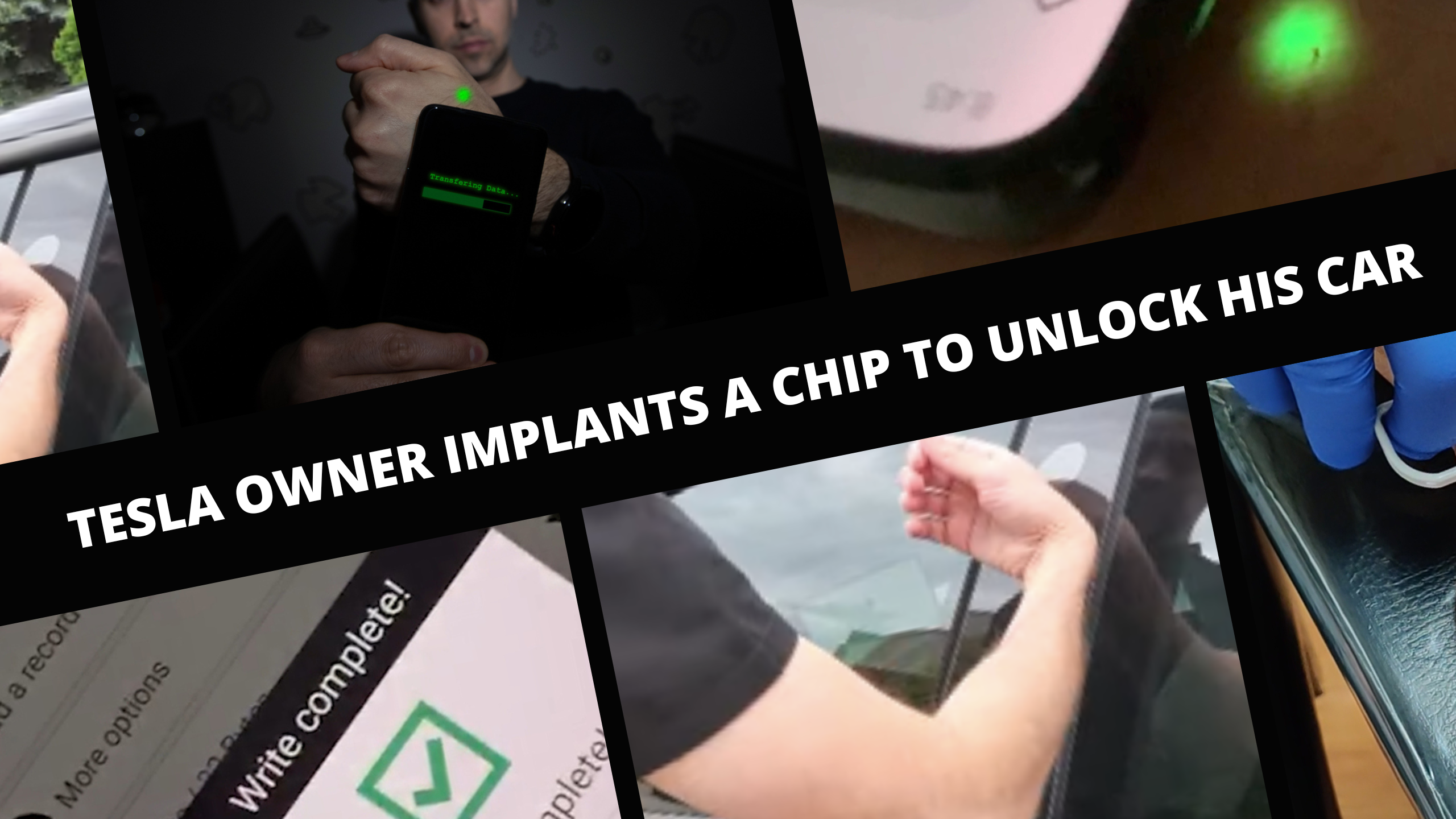 Tesla owner implants a chip to unlock his car and more

Brandon Dalaly, a Tesla owner, has a unique way of unlocking his car: with his hand. Or rather, with the specially made chip that was implanted in his hand eleven days ago. I spoke with him about his new implant and he told me that this was actually his second one.

The first thing I wanted to know was how bad it hurt. If you watch this video, you’ll probably wince in imaginary pain as I did. Brandon explained that this was his second chip. When he received his first one, he did not use any anesthesia or anything to numb it.

“The first one was a little bit smaller so it wasn’t as intense as shoving that giant rod into my hand. The first one came preloaded into a larger syringe. They pushed the syringe in and they popped in the chip similar to how they would microchip a dog.”

The first chip implant burned and was sore for about a month. However, for the second one which is what is used to unlock his Tesla, his hand was anesthetized with lidocaine. Brandon said a four-gauge needle was used.

The chips, he explained, are coated in biocompatible substances such as biopolymer. His other one is a bioglass. Once implanted, the body encapsulates the chip with its own tissue.

I was curious as to why Brandon had two chip implants. He explained that they do completely different things. The chips are used for a variety of purposes such as access control, storing data, lighting up under your skin, or storing cryptocurrencies. Brandon is actually beta testing the chip he uses to unlock his Tesla.

The chip that Brandon uses to unlock his Tesla is the VivoKey Apex which is a contactless NFC secure element chip.

“I’m in a beta group of around 100 people and this one can do secure transactions and java card applets. The company that put this together literally has its own app store where you can wirelessly install apps into your body with these chips. And one of the apps just happened to be a Tesla key card. So that was the first app I installed on it because I have a Tesla and now I use that as my key when my Bluetooth key fails or I don’t have my key card. You just use your hand.”

The first chip, Brandon explained, is the key to his home and stores his portfolio, his contact card, medical information, Covid vaccination card, and similar items. The chip can be scanned with any cell phone which then opens a portal you can access the information.

“The whole idea was that I would have my house key in my left hand and my car key in my right hand. And then what’s really cool is when it’s approved, they can wirelessly activate the new chip I just got to do credit card transactions. I can link a credit card to it and I can use it anywhere where there are tap-to-pay terminals.”

The Obvious Concern: accidently being close to something that would scan the chip and use it.

One concern I had was what if the chip was accidently used or accessed. Or, worst case scenario, hacked? For example, would a nearby credit card machine accidently scan your chip and access your money? Brandon explained that the chip had to be very close for the machine to read it.

“You have to be within a few millimeters of the thing and realistically, hopefully, you’re not just walking through credit card terminals and brushing your hands against them during mid transactions.”

“It’s a very short read range. It’s no different from your phone if you use Apple Pay. It’s like that but it’s built in your hand.”

Will Brandon get more chips?

Could this be the tech version of tattoo addictions? I asked Brandon if he had plans for getting any more chips in the future. Brandon works in tech and `is always trying to be on the cutting edge of everything.

“For me, it’s something that made sense at the time. It’s kind of like a fun party trick. When you can one of my chips with your phone, it glows green underneath your skin.”

There is another chip but it’s not yet available in the U.S. just yet. This one measures your body temperature. The capsule is installed in your chest and you can scan it with your phone and take your temperature.

“We’re at the dawn of this technology and it’s a very niche product. And there’s been a lot of pushback. People thought that Bill Gates was putting tracking chips in the Covid vaccine. It fuels a lot of conspiracy theories.”

“It’s funny because these chips can’t track anything. You would need an external power supply to be tracked anywhere. And their phones are tracking them everywhere they go anyway. If you go to your Google location history, it shows you step-by-step where you’ve been.”

“And there’s the religious people who have sent me a bunch of weird comments on Facebook about the mark of the beast on the video of my first chip installation. There’s something in the Book of Revelation that talks about this mark in your hand or forehead that shows your allegiance to Satan or something like that. I just don’t want to have to worry about forgetting my car keys. I’m not over here worshiping Satan.”

Cost of getting the Tesla key card chip implanted.

If you were to guess how much this would cost, you might be shocked at how wrong you may be. Unless you guessed $400.

“It’s not as bad as people think. Since I was a beta tester, I got the chip for $300 and then my installer charged me just $100 to put it in. To him, it was the same as a subdermal piercing. It’s the same method but he was sticking in something different.”

Brandon’s installer has been a professional piercer for over 15 years. What do you think? Would you consider having a chip installed in your hand to unlock your Tesla or smart car?

Tesla owner implants a chip to unlock his car and more