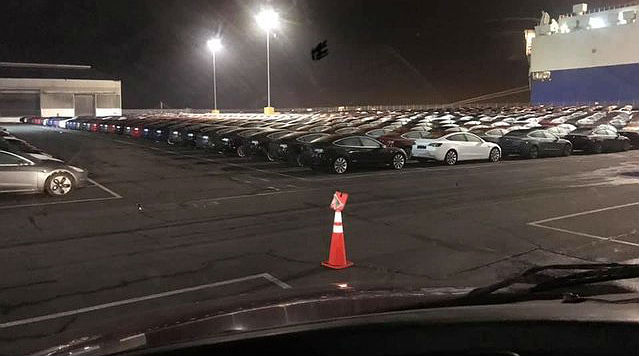 Tesla recently exhibited what could very well be the most encouraging sign of the Model 3 ramp to date. From Friday to Sunday, Tesla registered a mammoth batch of more than 28,000 Model 3 VIN registrations, over 20,000 of which were designated for international markets. With these latest batches of filings, Tesla’s total Model 3 registrations now number 236,512.

The new registrations were reported by Model 3 VIN tracking group @Model3VINs, which tracks Tesla’s filings for the electric sedan. This latest batch also complements the more than 14,800 Model 3 VINs that were registered in the week of January 6. That’s more than 42,000 Model 3 VINs filed during the first two weeks of the first quarter alone. For perspective, the filings of the past three days alone are roughly equal to the registrations that Tesla submitted for the vehicle until early April 2018, more than eight months after the electric sedan entered production.

The recent batch of Model 3 VIN registrations come amidst Tesla’s ongoing push to deliver the electric car to international markets such as China and Europe, both of which represent a potentially lucrative market for the vehicle. Tesla, for one, has noted that the “mid-sized premium sedan market in Europe is more than twice as big as the same segment in the US” on its Q3 2018 Update Letter. China, on the other hand, expects its electric car market to expand this year, with the country putting a sales target of 2 million new-energy vehicles in 2020, as noted by the Nikkei Asian Review.

Overall, these monster batches of VIN registrations bode well for Tesla’s planned ramp for the Model 3. With the vehicle already saturating North America, and with the majority of remaining North American reservation holders likely holding out for the highly-anticipated, $35,000 Standard Range Model 3, delivering the electric car to other countries is pivotal for Tesla’s performance this first quarter.

This is not to say that everything will be easy for Tesla for the next few months, though. If any, the electric car maker still needs to overcome some challenges as it starts bringing the Model 3 to foreign territories. As of early January, reports indicate that Tesla is still looking to receive homologation approval to sell the Model 3 in Europe. In a statement to the Los Angeles Times, the company stated that it was working closely with regulators and that it expects to gain approval for the Model 3 after the holidays. That said, Tesla is yet to confirm if the electric sedan has received the approval of European regulators as of date.

In China, Tesla is set to start its Model 3 assault by bringing the vehicle’s top-tier variants — the Long Range AWD and Performance variant — to the country. These two vehicles are expected to start saturating the Chinese EV market as the company prepares to manufacture more affordable variants of the electric car in Gigafactory 3, which is currently undergoing construction. During Gigafactory 3’s groundbreaking event, Elon Musk stated that he expects the first locally produced Model 3 to roll out of the Shanghai facility towards the end of the year.

For now, sightings of Model 3 batches seemingly intended for the international markets have been reported by the Tesla community. Earlier this month, Tesla enthusiasts from the United States have shared images of trucks loaded with what appeared to be European-spec Model 3 heading towards a pier. Even more recently, Tesla community and r/TeslaMotors member u/Nicoriquo shared images of a Model 3 fleet that reportedly arrived in Europe.