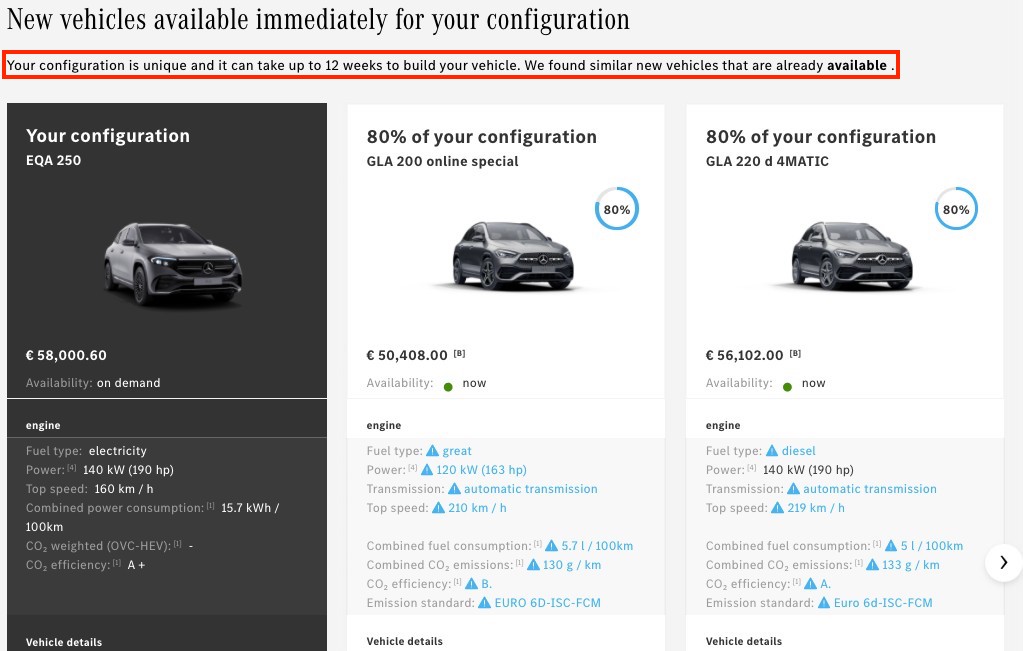 Buying an all-electric car from a traditional dealership could be a pain. Apart from the typical lack of available inventory or test drive units, some dealers seem straight-up opposed to the idea of electric cars. EV advocates over the years have shared stories of dealerships pushing ICE alternatives to customers who wish to buy electric, with some salespersons reportedly going as far as using misinformation to do so.

One of Tesla’s competitors in the premium crossover SUV segment, Mercedes-Benz, appears to have adopted a similar tactic of sorts, and on the order page for its newly-released EQA crossover no less. As of writing, customers interested in purchasing a Mercedes-Benz EQA, a rather attractive all-electric crossover that may appeal to luxury car fans who are opposed to the style of the Tesla Model Y, could configure their vehicle on the automaker’s official website. After configuring the EQA with their preferred options, Mercedes-Benz then shows customers a rather interesting table.

The top of the table shows a message telling customers that their EQA order is “unique and it can take up to 12 weeks to build.” Mercedes-Benz then directs customers to a number of alternative, “similar new vehicles that are already available.” And just like in traditional car dealerships, these alternatives are powered by the internal combustion engine. Some EV advocates who have tried ordering an EQA were directed to hybrid alternatives as well.

This is a rather strange sales tactic, to say the least, especially considering that Mercedes-Benz already has an all-electric SUV in its lineup, the EQC. Considering that interested buyers of the EQA are likely looking specifically for an all-electric car, it would probably be a better idea for the automaker to suggest other EVs in its lineup. As noted by EV enthusiasts on social media platforms such as Twitter, suggesting alternative ICE cars in the configurator of an all-electric SUV does not seem like a sound strategy at all.

Buying an EV is not a small decision, considering that using an electric car does require the adoption of some new habits such as plugging in the vehicle after getting home. If Mercedes-Benz is earnestly suggesting alternatives that are more in line with its customers’ preferences, it would be best to list other EVs in its lineup like the EQC. Otherwise, EV enthusiasts looking to acquire an electric car from the luxury automaker would end up essentially dealing with the same annoying sales tactic as traditional dealerships on the company’s actual website.