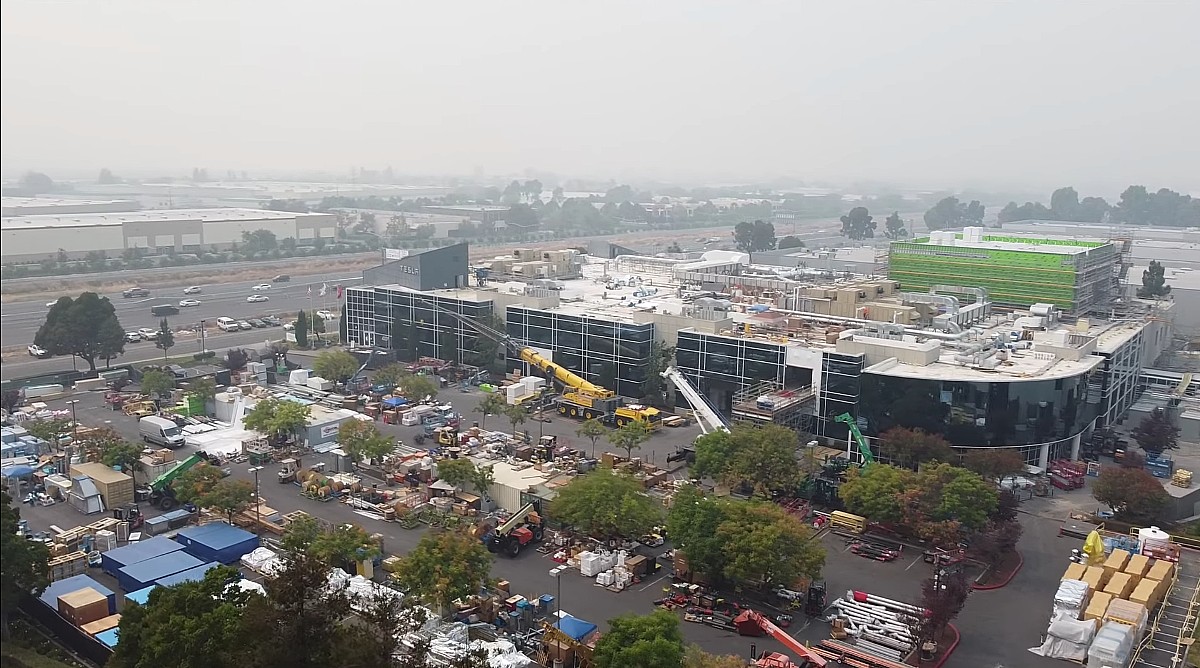 Tesla’s Battery Day is only a few weeks away, and as the electric vehicle community eagerly waits for the highly-anticipated event, the company’s pilot battery production line appears to be well on its way to being completed, and perhaps even ramped. This was hinted at by a recent drone flyover of Tesla’s building at Kato Road, located close to the company’s Fremont factory.

Footage taken by a Tesla enthusiast who runs the Living with Intent channel on YouTube shows that the expansion of the Kato Road facility is well on its way. Based on the short video taken of the site, it appears that much work is being done inside the building, as hinted at by the massive amount of materials that are seemingly waiting to be taken inside the facility. The extra floor that Tesla has been constructing is also showing progress since it was initially photographed early last month.

Tesla is a disruptive company that moves fast, and thus, sightings of facilities with ongoing improvements are not really new. However, the Kato Road building is quite unique in the way that it is expected to house the pilot line for Tesla’s own battery production system. Elon Musk has been pretty open about his enthusiasm for Battery Day, stating that the event will likely blow people’s minds. At the same time, the CEO also suggested that the event will include a tour of Tesla’s in-house battery cell production setup.

This cell production system is the first of its kind, as Tesla has partnered with other battery firms in the past. Panasonic is a key partner in Gigafactory Nevada, while LG Chem and CATL are partners for Gigafactory Shanghai. But while Tesla reportedly continues to work with its partners to make better batteries, the company is also hard at work developing its own cell production capabilities. This was hinted at during the 2019 Annual Shareholder Meeting, when company executives described the effort as a step towards Tesla becoming the master of its own “destiny.”

Filings to the City of Fremont suggest that Tesla’s Kato Road facilities will be utilized for the “Roadrunner” project, which refers to the company’s own custom battery cell production line. Tesla’s “Roadrunner” cells have not been discussed in depth by the company yet, but speculations and reports suggest that the batteries are next-generation lithium-ion cells that are capable of lasting a million miles. Such batteries could make a big difference for Tesla’s flagship products like the Plaid Model S and the Megapack.

Once completed, the Kato Road facility is expected to house about 45 research and development employees and up to 425 manufacturing workers that are spread through several shifts from Monday to Friday. This may allow the pilot cell production line to produce enough batteries for low-volume vehicles, perhaps like the Plaid Model S and the new Roadster. Tesla has since opened a number of job openings related to cell manufacturing that are seemingly for the Kato Road location as well. Among these job listings are Cell Engineers, Production Process Engineers, and Controls Engineers, all of which were listed as based in Fremont, California.

Watch a recent footage of Tesla’s “Roadrunner” site in the video below.