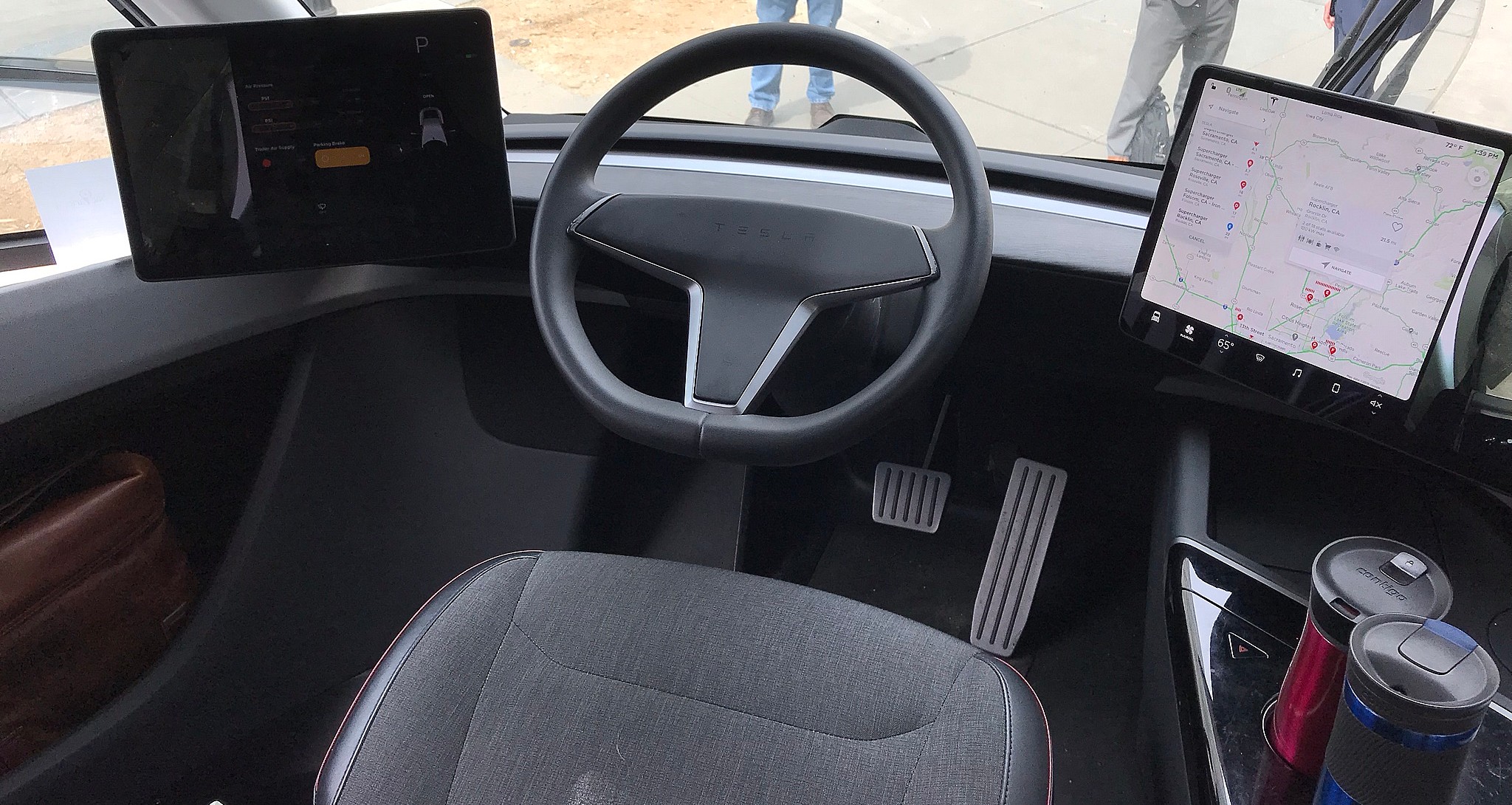 The Tesla Semi was recently showcased in Sacramento, CA for the CALSTART Advanced Tech Vehicle Display and the 2030 Clean Transportation Summit Reception, and it was in the area long enough for some enthusiasts to capture detailed photographs of its interior. The images reveal a Model 3-esque interface, a mysterious third pedal, and a vehicle that is battle-scarred from thousands of miles of real-world testing.

Tesla community member u/rygel_fievel from the r/TeslaMotors subreddit noted that the Semi looks like a vehicle that is continually being used, as evidenced by the scratches on its piano black cup holders, stains on its driver’s seat, and even some bugs on the windshield. It remains to be seen why Tesla did not opt to detail the Semi before showcasing the vehicle in the event, but it is pretty difficult to deny that the all-electric truck definitely looks the part of a long-hauler that’s in constant service.

Noticeable from one of the pictures of the truck’s interior is a small third pedal positioned beside the brake pedal. Tesla has not posted any details about this particular component, though speculations among the community suggest that the pedal is a mechanical parking brake, which is used in some vehicles. The twin Model 3-esque displays on both sides of the Semi’s steering wheel are also quite interesting, with the right display featuring Navigation, and the left being dedicated for the all-electric truck’s settings. The Semi’s left screen seems to feature a dark theme too, which makes its GUI really easy on the eyes.

The details on the Semi’s prototype’s interior are most definitely not finalized yet, but the current setup of the test vehicle is already well thought-out. The long-hauler’s central driving position gives a way for drivers to get a commanding view of the road, and the two side camera feeds on the left and right displays allow operators to see what’s happening in the Semi’s blind spots at all times. These design choices all but emphasize a central theme with the Semi: it will be a truck that is easy to operate, feature-rich, and most of all, safe.

The Tesla Semi prototype being showcased at Sacramento is one of two working test mules for the vehicle. According to enthusiasts who previously sighted the Semi, the silver unit is a hand-built prototype that is largely made of carbon fiber. The vehicle is also reportedly equipped with a whopping 26-camera setup, some of which are installed on the truck’s side mirrors, rear, and windshield. The silver Semi prototype reportedly has a range of 300 miles per charge as well.

Being a Class 8 truck, the Tesla Semi has the potential to be a disruptor in the trucking market. The long-hauler shares components with the Model 3, such as its motors, door handles, air vents, and displays. Thanks to its four electric motors, the Semi can accelerate from 0-60 mph in 5 seconds flat without cargo. With a full load, the truck is still quick on its feet, hitting 60 mph in about 20 seconds. Tesla noted that the Semi would enter initial production sometime in 2019, though following statements by the electric car maker point to a ramp in 2020.