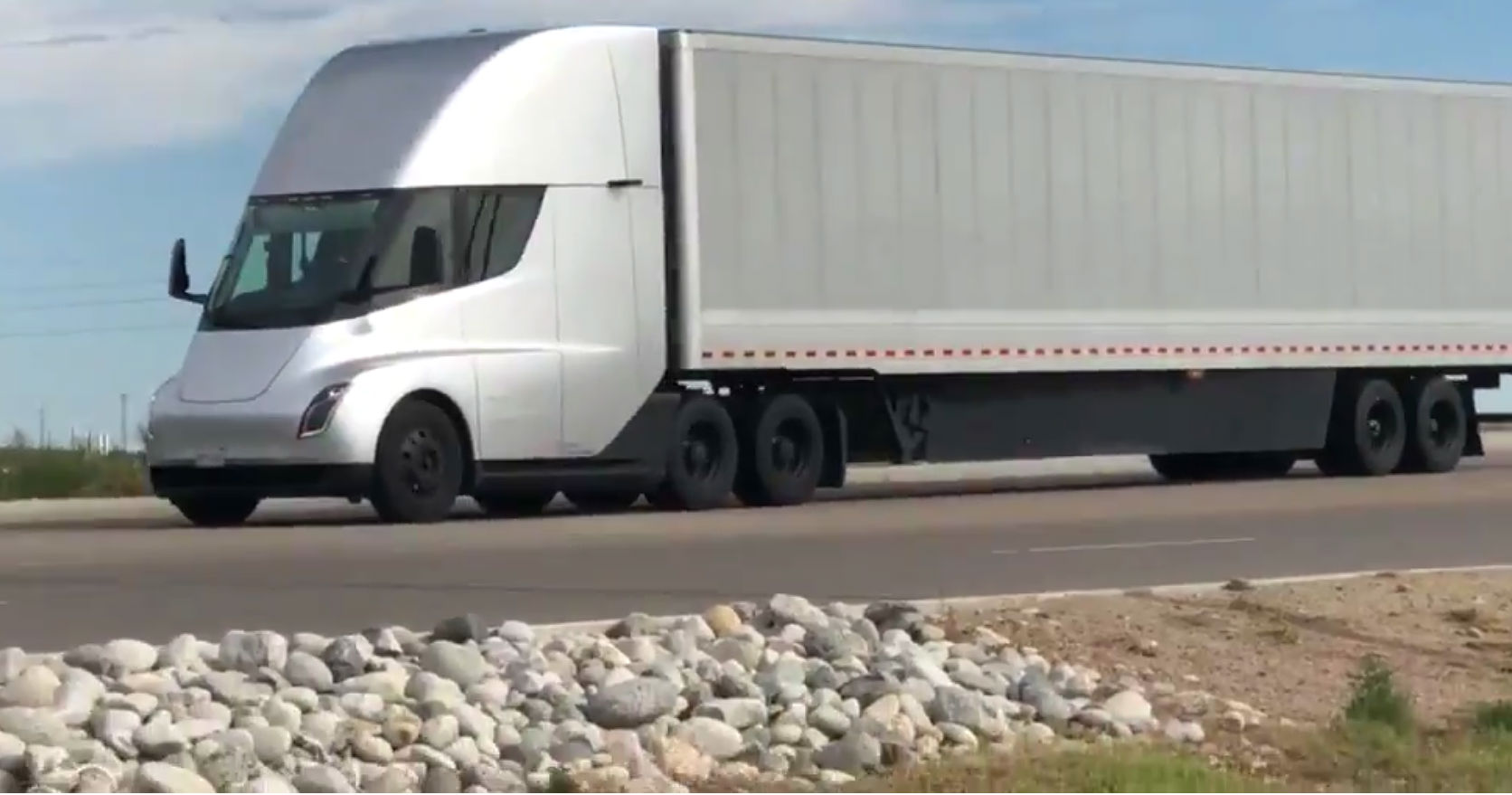 After being sighted on Des Moines, IA on Thursday, the Tesla Semi has been spotted smoothly gliding through Colorado. The Semi was sighted at the Brush, CO Supercharger, where Tesla’s employees accompanying the truck answered questions about the vehicle while it was charging.

The Tesla Semi sighting was shared by recording engineer Erik J. Martin on Twitter. Martin’s posts, one of which was retweeted by the official Tesla Twitter account, featured the Semi as it was rolling into the Brush Supercharger station. Erik mentioned in a series of posts that he was informed that the prototype is the short-range version of the truck, with a range of 300 miles. The Tesla engineers accompanying the vehicle reportedly noted that the Semi was hand-built and that it was largely made of carbon fiber as well.

Being the short-range version of the electric truck, the Semi currently making its way across the United States is a daycab vehicle, though Tesla’s employees reportedly informed Martin that there would be a variant of the truck that would have space for sleeper features. Such features would be perfect for the long-range version of the electric truck, with drivers being able to take short naps while the Semi is charging at Tesla’s upcoming Megacharger network.

Also notable were the Semi’s cameras, of which there are 26 around the prototype. Tesla’s employees accompanying the Semi reportedly mentioned that there would likely be fewer cameras in the final iteration of the vehicle. Interestingly, while the Semi’s crew was very willing to address inquiries about the truck’s features, they were particularly secretive about the vehicle’s current charging system.

The Tesla Semi is designed to be supported by the upcoming Megacharger network, which is not operational yet. For now, the Semi is using Tesla’s current Supercharger network, though Erik noted that the engineers appeared to be using around 4-6 Superchargers to charge the all-electric Semi truck.

Yep! It was The closest superchargers. They hobble together an adhoc megacharger until those are built out in preparation for the roll out of production #teslasemi

Tesla’s engineers also reportedly noted that so far, the only locations that have leaked the truck’s visit to their facilities were J.B. Hunt and UPS. This suggests that the Semi might have visited facilities of other reservation holders. One of these is Ruan Transportation Management Systems, which is based in Des Moines, IA. Ruan published a blog post about the Semi’s visit to their facility yesterday, even discussing some of the truck’s remote monitoring features.

“We will continue to be involved with the team at Tesla Motors as they introduce the trucks to the market,” said Cade. “We will work with them directly to ensure the vehicles will serve us and our customers to the level we both expect,” Ruan vice president of fleet services James Cade wrote in a blog post.

Tesla appears to be going full throttle in its efforts to refine the Semi before the vehicle enters production. The truck’s initial specs are already impressive, with its four Model 3-derived electric motors, its 0-60 mph time of 5 seconds flat, and its Class 8 hauling capacity. The Semi is also equipped with several key features, such as jackknife protection, near-infinite brake pads due to its powerful regenerative braking system, and Convoy Mode, a feature that allows the Semis to semi-autonomously draft in close proximity with each other, reducing energy usage from wind resistance.

Watch Erik J. Martin’s video outlining the information he received from the Tesla engineers accompanying the Semi below.