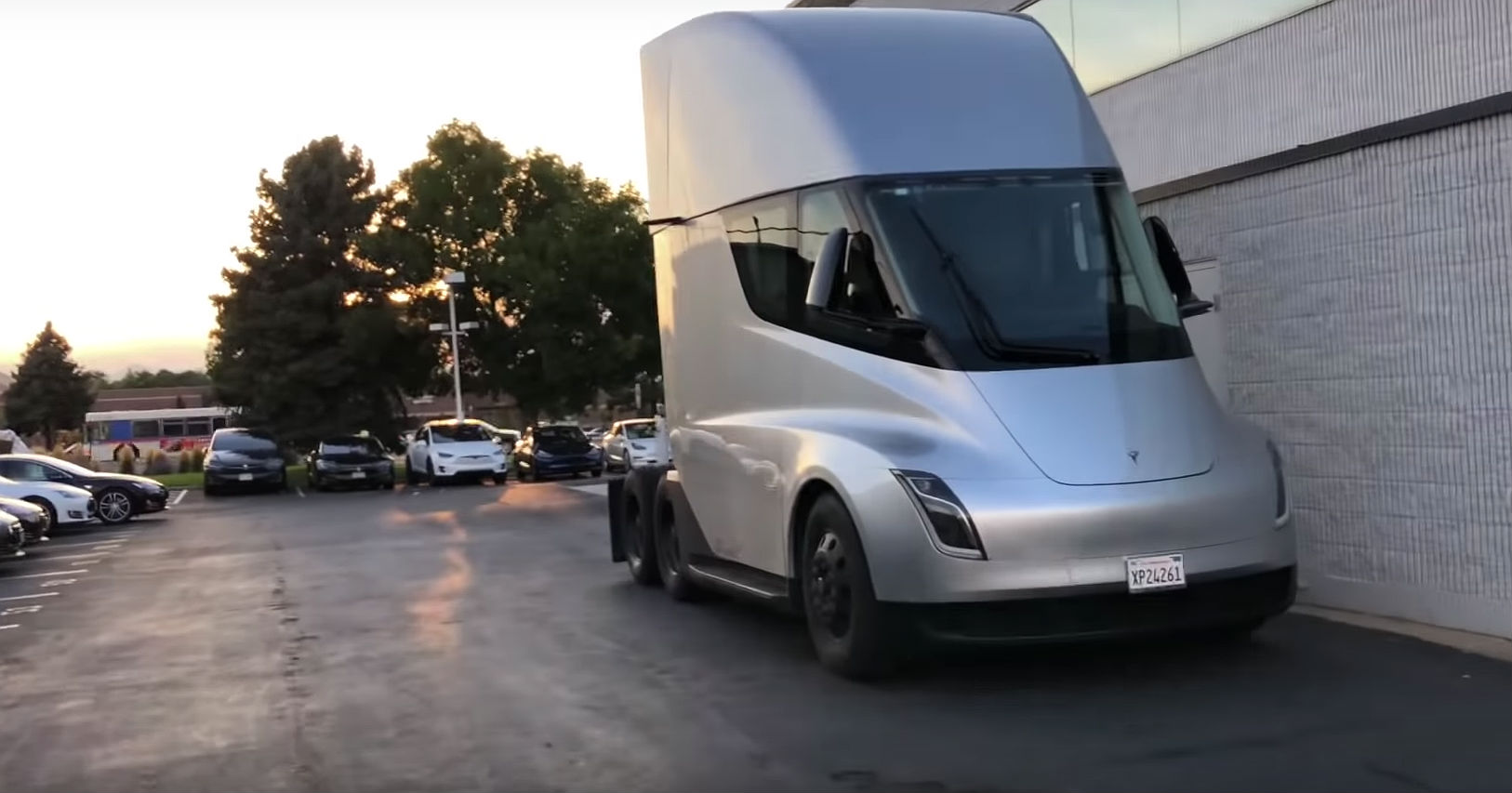 Tesla expects to start production of the electric Semi truck sometime in 2019, but the company is already getting busy doing some real-world tests using a hand-built prototype version of the vehicle. The Tesla Semi prototype has been spotted in multiple states recently, and when it stopped by CO, it was filmed extensively by Tesla enthusiasts.

The Semi was initially sighted as it was charging at the Brush, CO Supercharger. During its stop, Model 3 owner and recording engineer Erik J. Martin was able to ask questions to the team of engineers who were accompanying the truck as it traveled across the United States. Among the most notable aspects of the vehicle that were related to Martin were its 300-mile range, its lack of a sleeper cabin, its carbon fiber body, and its unique 26-camera system.

These cameras were filmed by Tesla owner-enthusiast Sean Mitchell, who was able to take a very close look at the electric long-hauler while it was parked at the company’s facility in Denver, CO. Mitchell’s video revealed the unique placement of some of the vehicle’s cameras, including those that were installed at the truck’s side mirrors, as well as an array of at least six cameras that were mounted at the back of the truck. The vehicle also featured Tesla’s trademark three-camera array at the front, which would likely be utilized for the vehicle’s semi-autonomous functions.

Tesla is sparing no expense with the Semi, and the vehicle is designed to be one of the most technologically advanced trucks on the road. Since it’s planned for a 2019 release, Tesla is likely ensuring that the vehicle is future-proof as well, which could explain why the company opted to install a very generous number of cameras in the prototype. Cameras would play a significant role in Tesla’s vision for the Semi, particularly since the vehicle was unveiled with a side-mirror-less design. “Convoy Mode,” a key feature that allows the trucks to semi-autonomously draft in close proximity with each other, would likely utilize input from multiple cameras as well.

In a follow-up video on his YouTube channel about his encounter with the vehicle, Erik J. Martin noted that he was informed that the Semi’s production version would likely have fewer cameras. This would be a sensible decision on Tesla’s part, especially since some of the cameras currently in the prototype appear to be redundancies for other cameras on the vehicle.

Tesla is now on full throttle in terms of testing the Semi on actual roads, and the prototype, which has been going around the United States for months now, has likely gathered a healthy amount of mileage. This could be seen when the long-hauler was filmed in Denver, CO, as signs of wear from thousands of miles worth of traveling were evident in the vehicle. These battle scars from the road make the Semi even more impressive, as it shows that Tesla is ensuring that the electric truck will be ready for deployment when it reaches the market.

Elon Musk announced last November that the Semi would enter production sometime in 2019. Such a timeline is hyper-aggressive, and is classic Elon Musk. That said, the fact that the Semi shares several components with the Model 3 such as its electric motors, door handles, air vents, and 15″ touchscreens would likely make the vehicle a little less troublesome to produce at scale than the midsize electric sedan. Thus, even if the Semi’s actual production ends up starting in “Elon time,” there is a good chance that the electric truck’s deliveries would not see the delays that plagued the company’s previous vehicles like the Model X and the Model 3.

Watch Sean Mitchell’s extensive look at the Tesla Semi in the video below.