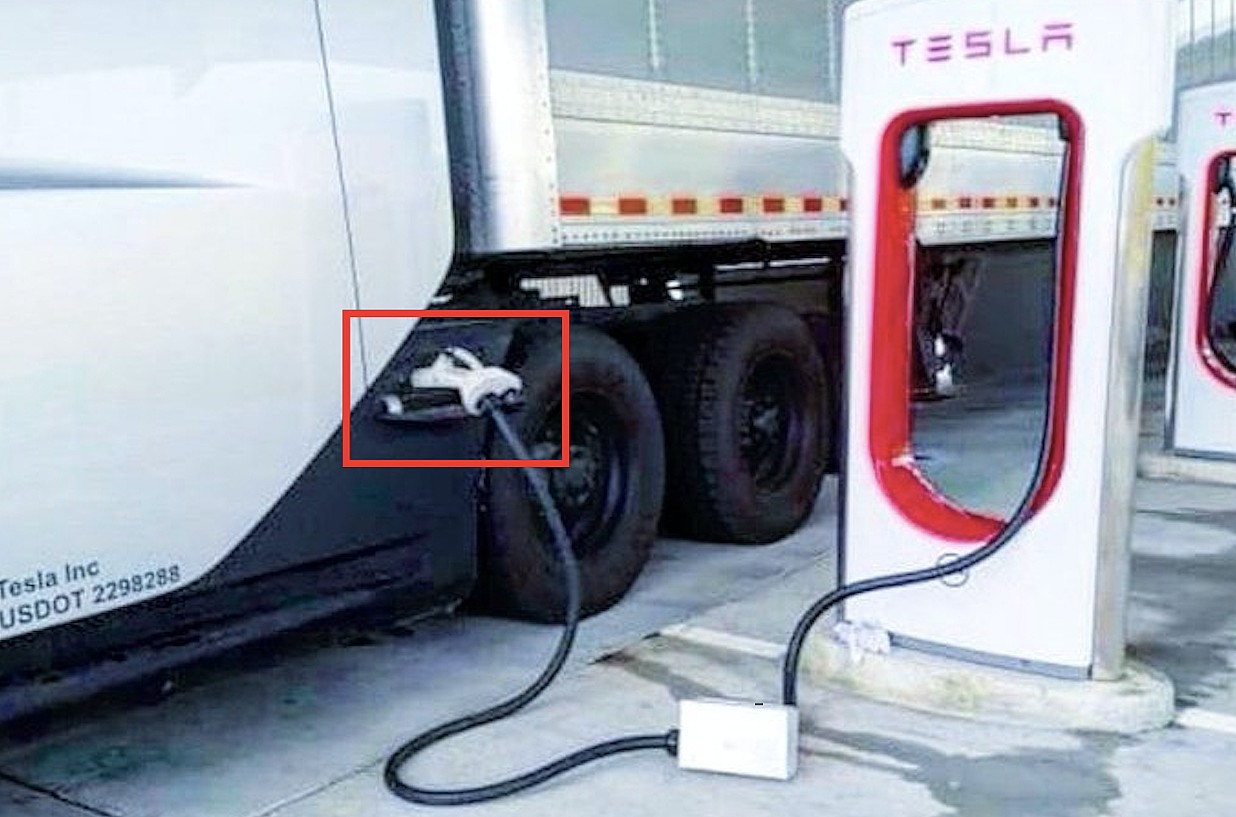 Perhaps one of the most secretive aspects of the Tesla Semi is its charging system. Since the vehicle’s unveiling, Tesla has been particularly careful about the ad hoc setup adopted by its Semi prototypes when they recharge their batteries at the company’s Supercharger Network. But with the Class 8 all-electric truck poised for volume production soon, it appears that Tesla has become a bit more generous in allowing EV enthusiasts to share photos of the vehicle’s charging setup.

Correction: We have been informed that the image of the Semi’s ad hoc Megacharger setup was photographed and shared on social media in February 2019. A report of the sighting was posted by Jeff Nisewanger on Electric Revs.

Edmonton, AB-based Tesla Model 3 owner @TeslaYeg, an avid enthusiast of the electric car maker’s vehicles, recently posted a photograph of the Tesla Semi as it was charging at a Supercharger station. The Model 3 owner did not specify the location where the image was taken, though it would appear that the Semi was in Canada when it was photographed. This is not too farfetched, as the vehicle has been spotted road testing in Canada not too long ago.

When the Tesla Semi was unveiled back in 2017, Elon Musk stated that the company will be setting up a network of “Megachargers” that would support the rapid charging needs of the Class 8 truck. The status of the company’s Megacharger ramp is unknown for now, though sightings of the vehicle across the United States indicate that Tesla has been using multiple regular Supercharger stalls as an ad hoc solution for the Semi’s charging needs.

Unfortunately, Tesla has previously been very secretive about how this ad hoc solution works or even looks like. Some Tesla owners who were fortunate enough to chance upon the Semi at a Supercharger in the past even mentioned that staff and engineers accompanying the Class 8 truck have specifically asked them not to take any pictures of the vehicle’s charger. This does not seem to be the case anymore, as per @TeslaYeg’s recent post on Twitter.

The ad hoc “Megacharger” being used in the Semi actually features a pretty compact setup, with the company using a box that bridges the cables from the Supercharger stall to the truck itself. Interestingly, the charge port connector attached to the Semi appears to have enough space for two cables, and the box that links the charging stall to the truck seems to have enough space to accommodate several Superchargers as well.

The next few months will likely be exciting for the Tesla Semi, considering that Elon Musk has announced that the vehicle should enter volume production soon. Recent sightings of the vehicle indicate that prototypes of the all-electric truck are being winter tested, and details of the Semi’s battery tech are expected to be discussed during the highly-anticipated Battery Day event this coming September. This suggests that a production ramp for the Semi is indeed underway, and it will only be a matter of time before the Class 8 truck starts being a common sight on freeways.