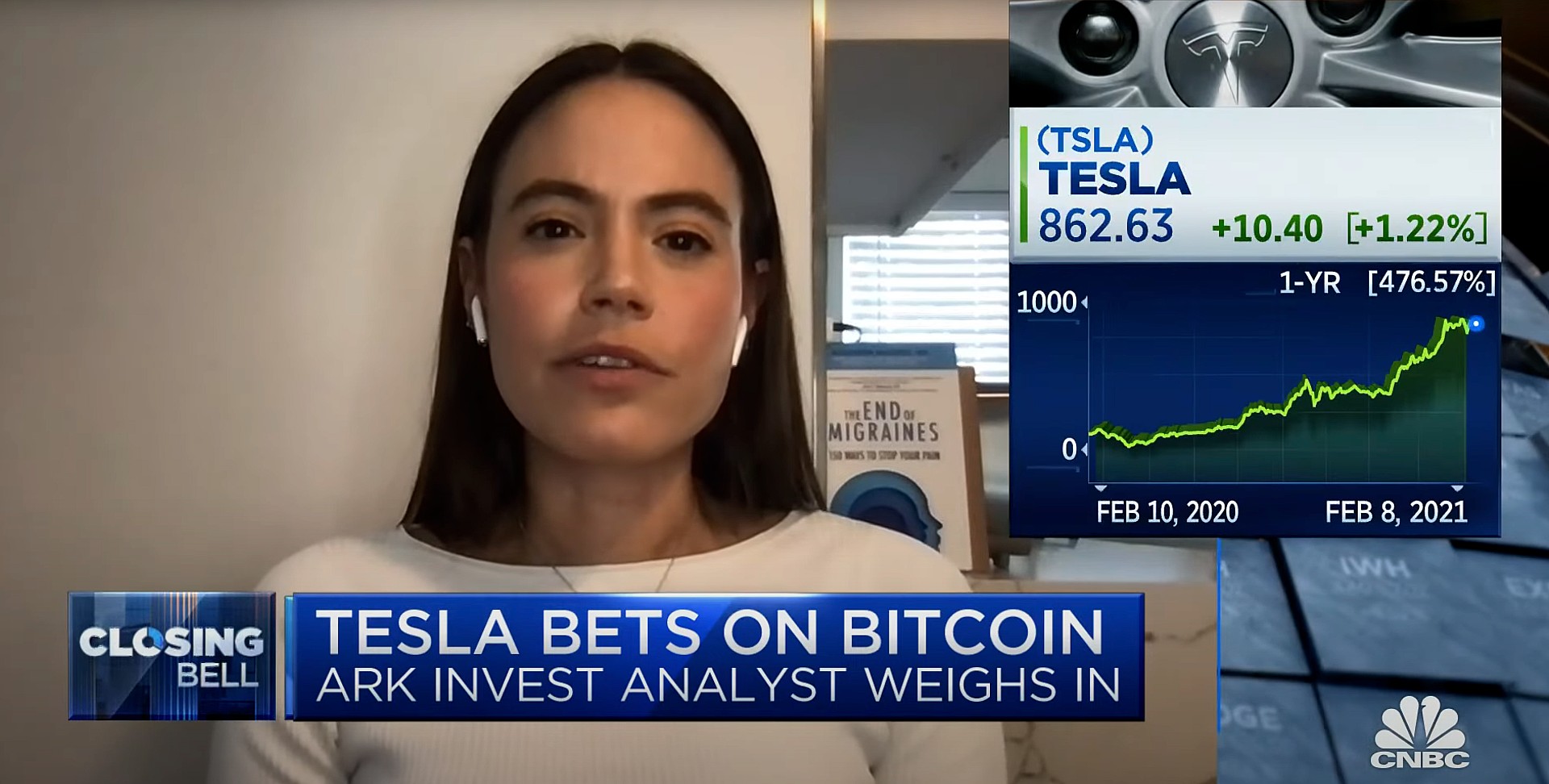 Tesla’s (NASDAQ: TSLA) $1.5 billion purchase of Bitcoin, a move announced yesterday in a 10-K document filed with the SEC, was the most popular news surrounding the electric automaker on Monday. While some TSLA investors saw it as their time to get out of being shareholders, others look at it as an advantage in several ways. One person looking at the move from a bullish perspective is ARK Invest’s Tasha Keeney, who believes Tesla’s Bitcoin purchase has heavy advantages as the company moves toward a broader consumer base, especially in international markets.

In a 10-K filing with the Securities and Exchange Commission (SEC), Tesla announced it had purchased $1.5 billion in Bitcoin, a cryptocurrency that has massive value, trading at over $46,600 at the time of writing. Tesla added that it “may acquire and hold digital assets from time to time or long-term,” and that it anticipates the purchase of its cars and other products by using the cryptocurrency in the near future.

The move follows CEO Elon Musk’s vocal support of both Bitcoin and Dogecoin, two cryptocurrencies that have maintained huge upside potential over the past several months. Among the ever-growing list of digital currencies, Bitcoin and Dogecoin are among the most popular in 2021, mainly because of ongoing celebrity support.

In the past several years, Bitcoin has become widely popular, especially after a meteoric rise in value in 2017 and 2018 that made it a household name. Early investors used Bitcoin to purchase goods from the internet in an untraceable manner. Now, more retail companies are working on accepting the crypto as a form of payment for everything from a pizza to a Rolex watch.

“It is a very serious move from [Tesla] – Keeney

Tasha Keeney, an analyst for Ark Invest, stated that Tesla’s move to purchase Bitcoin is one that aligns with the company’s recent Big Ideas Report. One of the most significant advantages to purchasing Bitcoin for Tesla is the versatility of the cryptocurrency, especially when doing business internationally. “Using Bitcoin as corporate cash, especially if you’re doing business in many different countries with many different foreign currencies…instead of dealing with the complication and the treasury risk, you can instead do this with Bitcoin,” Keeney said. “We think it makes sense from a corporate cash standpoint, and actually, we’ve done some analysts to say that if 1% of all the cash from the companies in the S&P 500 were to be converted into Bitcoin for corporate treasury purposes, this could actually increase the price by a meaningful amount, by about $40,000.”

Additionally, when operational in other countries, Tesla’s planned ride-hailing Robotaxi service could avoid hurdles and complications in payment by using a universal currency instead of multiple different foreign currencies. Keeney says the payment function could be void of conversion issues if customers used a single form of payment instead of dealing with various currencies in each region.

Bitcoin is no longer a risky or unusual form of payment. Many large companies accept the crypto as a form of currency, and Tesla just plans to be the latest one to accept it. “[Their move] is validated by other firms doing the same thing,” Keeney added during an interview with CNBC.

With Tesla focused on a widespread and quickly accelerating rollout of its products in foreign countries, Bitcoin’s international usage seems to be an advantage that the automaker can use. From a treasury perspective, it doesn’t make sense to deal with so many different foreign currencies, and Bitcoin’s universal acceptance across the world gives Tesla versatility as it expands. With plans to enter the highly elusive Indian market shortly, and expansions in Singapore, Israel, among several other countries, Tesla is technically making a move that supports its goal: accelerate the world’s transition to sustainable energy.

Tesla’s somewhat early adoption of Bitcoin as a payment method and as an internal investment also holds other benefits, Keeney says. With Tesla joining the Bitcoin movement, it, along with other companies, could experience a tailwind in growth from its influence. Other companies are bound to either invest or accept Bitcoin as a currency later on. The entities that got in before it was widely-accepted could benefit from a surge in valuation after it continues to be looked at as a payment method.

“Being one of the first companies to invest in Bitcoin, to transact in Bitcoin, actually gives them sort of an advantage to really lay that infrastructure as it becomes increasingly important. And again, as other firms might do it, because we feel there will be the need for the infrastructure to be set up. So, [Tesla] will be one of the first players to figure this out,” Keeney stated.

Check out Keeney’s interview with CNBC below.

Disclosure: Joey Klender is a TSLA shareholder. He does not hold any BTC and has no intentions to open any positions within 72 hours.