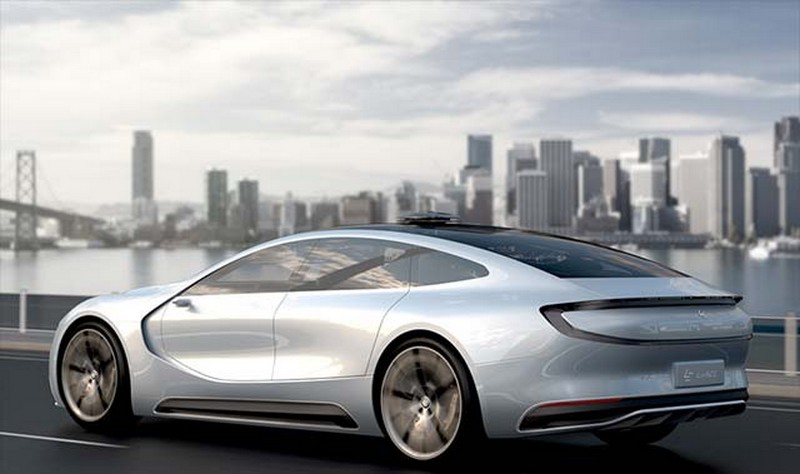 LeEco took the wraps off its LeSEE concept electric four door sedan in advance of the Beijing auto show yesterday. But company CEO Jia Yueting had even bigger news to share.

LeEco, the Chinese electric car start-up headed by Jia Yueting, a multi-billionaire who made his fortune selling smartphones and televisions to millions of customers, has unveiled its first concept car ahead of the Beijing Auto Show. It is intended to compete heads up against the Tesla Model S.

The concept car goes by the name of LeSEE. An all electric four door sedan, it has been engineered to be a “smart”, “connected” and “automated self-driving” car according to LeEco.

Jia Yueting iss excited by the prospects for China to become a leading auto manufacturer. “When everyone is questioning us over our ability to develop a car like this and is laughing at us, we are still able to be here and show you this car … I am so emotional.” Ding Lei, co-founder and global vice chairman of LeEco added that the car could be made in the U.S., China, or elsewhere. If so, it may offer a glimpse of what an actual production automobile from Faraday Future might be like.

LeEco is the primary financial backer of Faraday Future and has forged an alliance with Aston Martin. LeEco says it will soon open a world class autonomous driving research center in conjunction with Faraday Future somewhere in Silicon Valley.

All the fanfare about the LeSEE concept almost overshadowed Yueting’s most important announcement. As reported by the Huffington Post, he told the audience in Beijing that LeEco cars would someday be offered free of charge to consumers. The company plans to make money on content and other services it sells through its connected fleet. “Our…pricing model will be similar to pricing models for cellphones and TV sets we sell today,” he said. “One day our cars will be free … We are getting there some day.”

In the future, the most important battle in the automotive marketplace will not be over what’s under the hood or who has the best styling. The primary objective will be to control the touchscreen that people will watch while being driven about by computers. LeEco intends to lead the way toward that bright tomorrow.