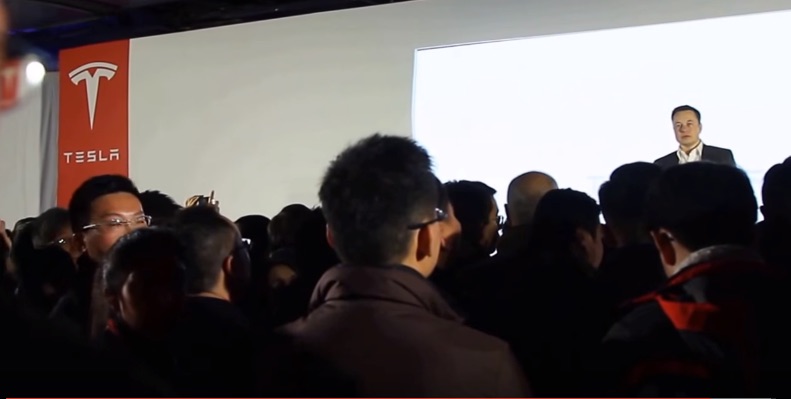 Speaking at a technology startup forum in Hong Kong today, Tesla CEO Elon Musk told the audience, “Hong Kong will probably be the leading city in the world in terms of electric cars”. [It can] serve as an example to the rest of the world on what to do,” Musk said according to the South China News. “I currently do not foresee any city exceeding Hong Kong. It will be the leader of the world,” he added.

The Hong Kong Government has shown a strong support of electric vehicle adoption by its initiatives to install charging stations throughout the city, and enact policies that favor purchasers of electric cars, including a registration tax waiver.

This apparently has worked. In 2010 there were 100 electric cars in Hong Kong. At the end of December, 2015, there were 4,198 EVs on the roads. Tesla sold 2,221 Model S sedans in Hong Kong last year, which accounts for 80 percent of newly-registered electric vehicles in the city.

Musk speaking at a Special Event for Tesla Hong Kong (above)

Despite the government’s support of EVs, it has not granted permission to use autonomous driving technology. Hong Kong has banned most features within Tesla’s recent Autopilot update that includes Autosteer and self-driving capabilities. One of the items on Musk’s to-do list while in Hong Kong is to meet with Chief Executive Leung Chun-ying to reassure him autonomous driving technology is safe to use and should be allowed on Hong Kong’s roads.

Elon said he thinks Asia will be the “biggest area of expansion” for Tesla in the next several years. He said his company plans a massive increase in Supercharger stations to accommodate that expected expansion of sales. He did say that Hong Kong has been far more receptive to Tesla automobiles than authorities on the mainland. Because of high import duties, Teslas are more expensive in China than in any other country, he added.

Later in the day, Musk sat down for an interview with Kristi Lu Stout of CNN. She asked him if he thought China, which is plagued by intense smog in its cities, realizes how important electric cars like Teslas are to its future. Musk was very diplomatic, saying that China is embracing electric cars and that volume sales in that country will be dependent on local production. Once Tesla begins making cars in China, its products will be much more competitive with those made by indigenous manufacturers.

Asked by Stout if the Model 3 will be manufactured in China, Musk replied that it would — eventually. “If it was possible for us to do local production in China today, we would. But I think it is going to be close to 3 years before we can achieve that,” he said.  The Model 3 will be a “smaller car without so many bells and whistles as the S or X,” but he expects it will be a “compelling” car.

Last year, Musk was quoted as saying the Model 3 would be definitely manufactured in China, leading some to assume the new car would be built there and then imported to the US. Musk was quick to clarify that the Model 3 and all Teslas would always be built in America, but that other factories in China and Europe might be required to meet demand in those parts of the world. He acknowledges that local production in China will be essential to overcome the high import tariff issue.

He then told Stout he welcomes the Chevy Bolt to the marketplace, especially if it is what he calls a “compelling car” in its own right. Several times during his visit to Hong Kong, he reiterated that Tesla’s main goal is to accelerate the development of sustainable transport and speed the transition away from fossil fuels. Any company that helps with acheive that goal deserves credit, he thinks.

As always, Musk was poised, confident and dedicated to Tesla’s central mission. His presence in Hong Kong was a testament to his commitment to the Asian market.