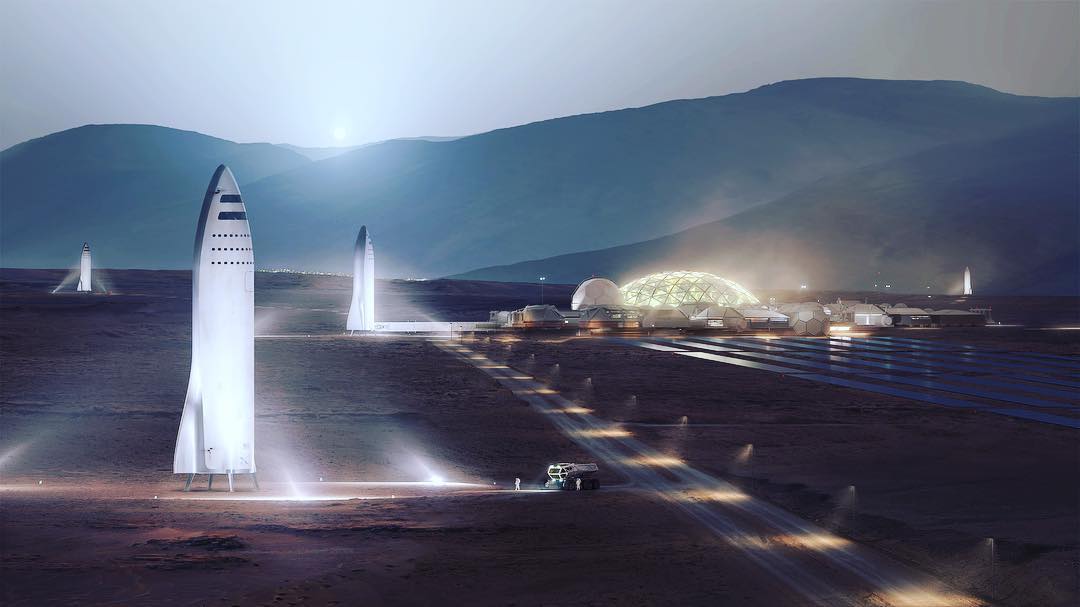 SpaceX's vision of a city on Mars. (SpaceX)

In a major divergence from SpaceX’s original strategy for colonizing Mars, Elon Musk has begun to release teasers suggesting that SpaceX will pursue the creation of a base or city on the Moon, likely before any serious pursuit of Mars.

While completely void of specifics, the teaser photos that have been published portray cities on other planets, with SpaceX’s partially downsized Big Falcon Spaceship (BFS) the main focus in both. Multiple BFS’ can be seen in each picture, suggesting that SpaceX has chosen to miniaturize its planetary colonization booster and ship, but accounted for this change by simply producing more of them. A SpaceX-built “Moon Base Alpha”. (SpaceX) SpaceX’s vision of a city on Mars. (SpaceX)

Whether or not this vision will come to fruition, many have frequently viewed the Moon and cislunar space as a potential stepping stone to locations further away from Earth, like Mars. In this view, humans would develop and maintain a base on or around the Moon and then utilize this experience and newfound knowledge to more safely guide ourselves to Mars and beyond. What is of crucial importance here is that, just days ago, NASA acknowledged that it had begun the process of requesting proposals for the creation of a commercial market for lunar cargo transportation. In short, NASA wants to pay private companies to transport cargo to the surface of the Moon. While currently rather small in scope, the sudden appearance of multiple potential heavy lift vehicles capable of placing cargo on or around the Moon may sway NASA to drastically expand its commercial Moon efforts.

Stay tuned for more updates to come. The livestream can be found below.