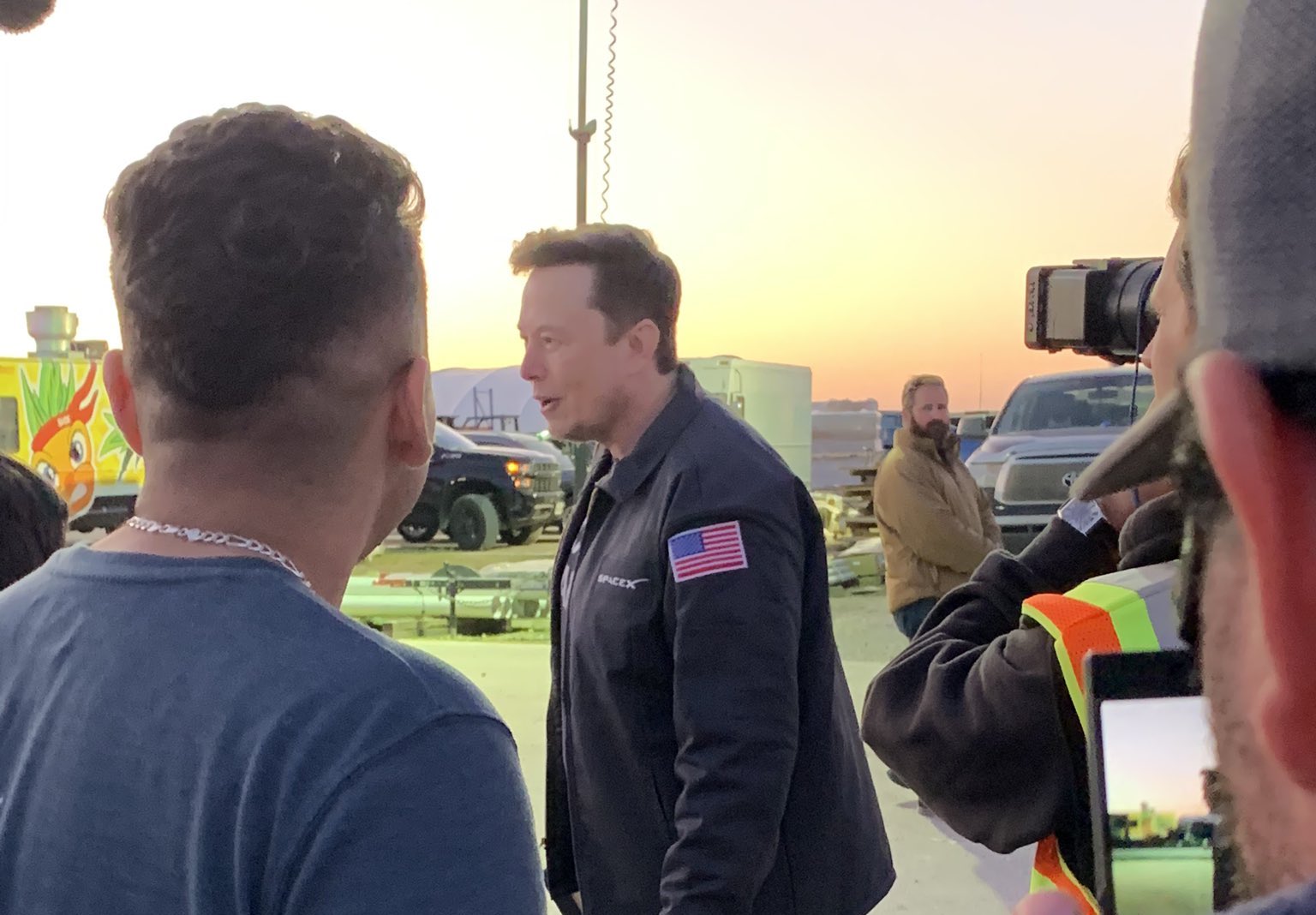 SpaceX chief and founder Elon Musk attended the company’s Career Day at the Boca Chica facility in Texas on Thursday. Musk was seen at the Stargate building talking to local news outlets and speaking with a few job seekers in attendance.

Twitter user @MartePaa shares a video of the SpaceX chief responding to him saying, “Don’t doubt your vibe,” referring to Musk’s new EDM single that just made it to the Top 10 on Soundcloud. Musk responds to him saying, “Every now and again, I doubt my vibe. So now, like, that was a mistake,” before walking away as the lively tunes of a mariachi band play in the background.

Went to career day at space x and when I was walking out the interview
I told @elonmusk “Dont doubt your vibe” lmao 😂
Then he said “every now and again I doubt my vibe…so now like…that was a mistake”
What in the world 🌎 pic.twitter.com/yQLcmLuzQu

Local news outlets and other attendees have also shared images of Musk giving an interview to the local media during the job fair.

When Elon Musk founded SpaceX in 2002, the aerospace company had nothing more than a carpet and a mariachi band. Now, almost two decades after SpaceX was launched, a sizeable crowd of hopefuls who want to become part of the production crew that assembles SpaceX’s next-generation rocket that will send people to the moon and Mars has shown up.

The job fair appears to have had an incredible turnout, as can be seen in Twitter user @SpacePadreIsle’s video of a long line of applicants snaking outside the Stargate building. The video also shows SpaceX paying tribute to its humble beginnings—and appeasing its CEO’s affinity for many things Mexican—by playing mariachi music over loudspeakers.

It’s no secret that Musk is a dancing kind of guy. He wasn’t averse to making more than a few moves at the launch of the Made-in-China Model 3 in Giga Shanghai, so it’s no wonder why the SpaceX chief has a certain penchant for the festive, lively tunes of mariachi music.

All we had back then was carpet & a mariachi band. Now, SPACESHIP!! https://t.co/jYECRWMz5M

He has, in fact, shown a liking for many things coming from beyond the southern border. In 2018, Musk even patented Teslaquila, his version of the popular Mexican spirit given the Tesla brand.

At present, the SpaceX chief is focused on the construction and assembly of Starship, the new rocket that is intended to fly humanity into deep space. Earlier this week, Musk announced on Twitter that SpaceX will be holding a career day at its Boca Chica facility, with the goal of hiring full-time production staff that can cover four shifts for round-the-clock operations. Musk said he will be at the event himself.

SpaceX also filed an application with the FCC seeking permission to use radio frequencies to communicate with the Starship SN1 prototype on a planned test flight dated for any time between March 16 and September 16.