Just like The Boring Company Not-a-Flamethrower, “Teslaquila” started off as a joke on Twitter. Months after the beverage was initially mentioned in Elon Musk’s dark-humored April Fool’s Twitter post, though, Tesla has now filed an application with the US Patent Trademark Office to trademark the alcoholic beverage.

Tesla’s trademark application for “Teslaquila” lists the product as “distilled agave liquor” and “distilled blue agave liquor.” Tesla also filed an “intent to use” trademark for the product, which means that while the company is not using the “Teslaquila” brand today, it has a “good faith intention” to use it in the future. Also notable in the filing is that Tesla appears to have actually registered a trademark for “Teslaquila” before, though the company applied for it in Jamaica back in April. 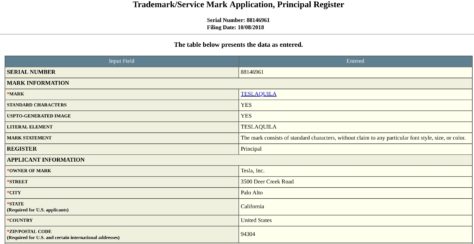 Tesla is currently asserting a US priority date based on its foreign application. Since the company’s trademark application was registered within six months of its trademark filing in Jamaica, the US Patent Trademark Office would now utilize the first-filed foreign application date (in this case, this past April) as the filing date for “Teslaquila” in the United States. This could be advantageous for Tesla, as any other applications for “Teslaquila” filed after the Jamaica filing would likely be rejected or suspended.

The idea of a Tesla-branded beverage came as part of Elon Musk’s April Fool’s joke this year. On April 1, Musk posted a dark-humored update on Twitter, stating that “despite intense efforts to raise money, including a last-ditch mass sale of Easter Eggs,” Tesla has become “completely and totally bankrupt.” Showing off his humor and tendency to troll on Twitter, the CEO also noted that as Tesla’s critics have pointed out, the company has all the “chapters of bankruptcy,” including “Chapter 14 and a half.” Chapter 14 and a half, of course, is something that doesn’t exist.

The April Fool’s joke mentioned that Musk was found passed out against a Tesla Model 3, surrounded by “Teslaquila” bottles. With the mention of a Tesla-branded beverage, Elon Musk’s social media followers were quick to ask the CEO if “Teslaquila” would really be sold in the future. Musk later stated that yes, there will be a “Teslaquila,” and there would even be free shots at Tesla’s showrooms every April 1.

A picture of a “Teslaquila” bottle was eventually shared on Elon Musk’s now-deleted Instagram page, and if Musk’s post was any indication, it appears that the beverage would feature 40% alcohol content. Musk’s upload also shows that a “Teslaquila” bottle would be 750 ml, which is pretty standard fare for the beverage. Musk has since uploaded the same image on his Twitter page today.

“Teslaquila” is not the first themed beverage that would be offered by an Elon Musk-led company. Back in 2016, SpaceX offered a limited-release SpaceX Wine, partly in celebration of the Falcon 9’s successful landing. Thus, as unorthodox or ironic as an alcoholic beverage being offered by a carmaker might sound, “Teslaquila” seems to fit right in with Elon Musk’s other whimsical merchandise.