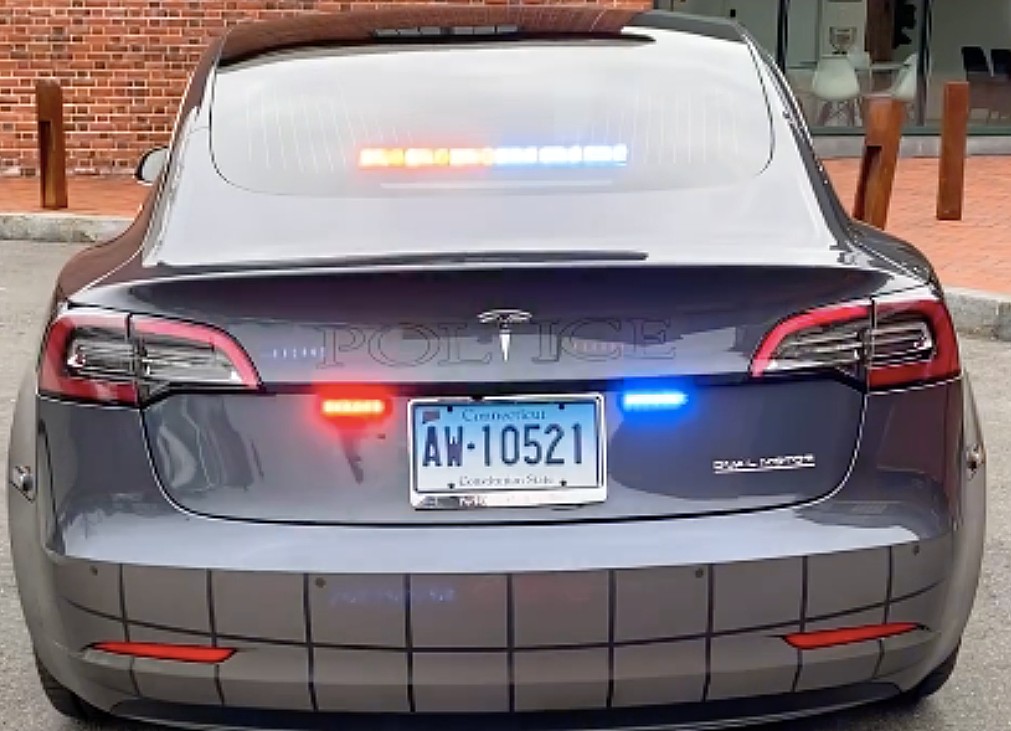 The Police Department of Westport, Connecticut is the most recent batch of public servants to adopt a Tesla Model 3 into its fleet of cruisers. The vehicle, which will be patrolling the streets, is modified with police equipment, though it also uses some unique Tesla features for its official duties.

After purchasing the car in December 2019, the Westport PD officially inducted a Tesla Model 3 Long Range All-Wheel Drive into its vehicle lineup on February 5, according to the Electric Vehicle Club of Connecticut.

Westport PD has been installing the necessary law enforcement modifications to the vehicle, like lights and sirens, with the help of Whelen Engineering and Fleet Auto Supply. The installation of these modifications required the lights to be wired to the vehicle’s main 75 kWh battery.

Impressively, the addition of these mods are expected to not drastically affect the vehicle’s battery or its range, according to the department. Westport PD ran a series of tests to see if the additional electrical apparatuses would bring down the 322 miles of range. The results indicated that the decrease in range was negligible.

Even more interestingly, the Model 3’s already installed Sentry Mode cameras saved the department roughly $3,000 in equipping the vehicle with external cameras. With other vehicles, like the department’s existing Ford Explorer police cruisers, Westport PD was required to outfit mandatory cameras on the car to record police stops and other incidents.

Although the Ford Explorers that Westport has used in the past cost around $15,290 less than the Model 3, Chief of Police Foti Koskinas says the fuel and maintenance savings alone will more than makeup for the additional dollars spent on the car. The department will be installing a Level 2 charger at its headquarters, which would allow the Model 3 cruiser to recharge its batteries when it’s not in use. The town of Westport also has numerous EV charging spots in local hotspots like the library and Town Hall.

Chief of the Westport Police Department Foti Koskinas stated the decision to purchase the Tesla Model 3 was based on performance, five-star crash safety ratings, advanced collision avoidance technologies. Officers are excited to take advantage of the vehicle’s instant torque, a feature they believe could make rapid acceleration to track down an assailant a safer and quicker process.

However, the insurance company handling the Westport PD’s account stated officers will not be authorized to use Tesla Autopilot during a patrol. Despite this, officers in Westport have been testing the vehicle out and within the first few days, and they have already racked up 600 miles during the Model 3 cruiser’s first patrol rounds.

Surely, local citizens are more supportive of their tax dollars being spent on an electric car as Westport holds the highest amount of electric vehicles per capita than any other town in the state. The car will be on display for officers to see at the department’s club meeting on February 20.