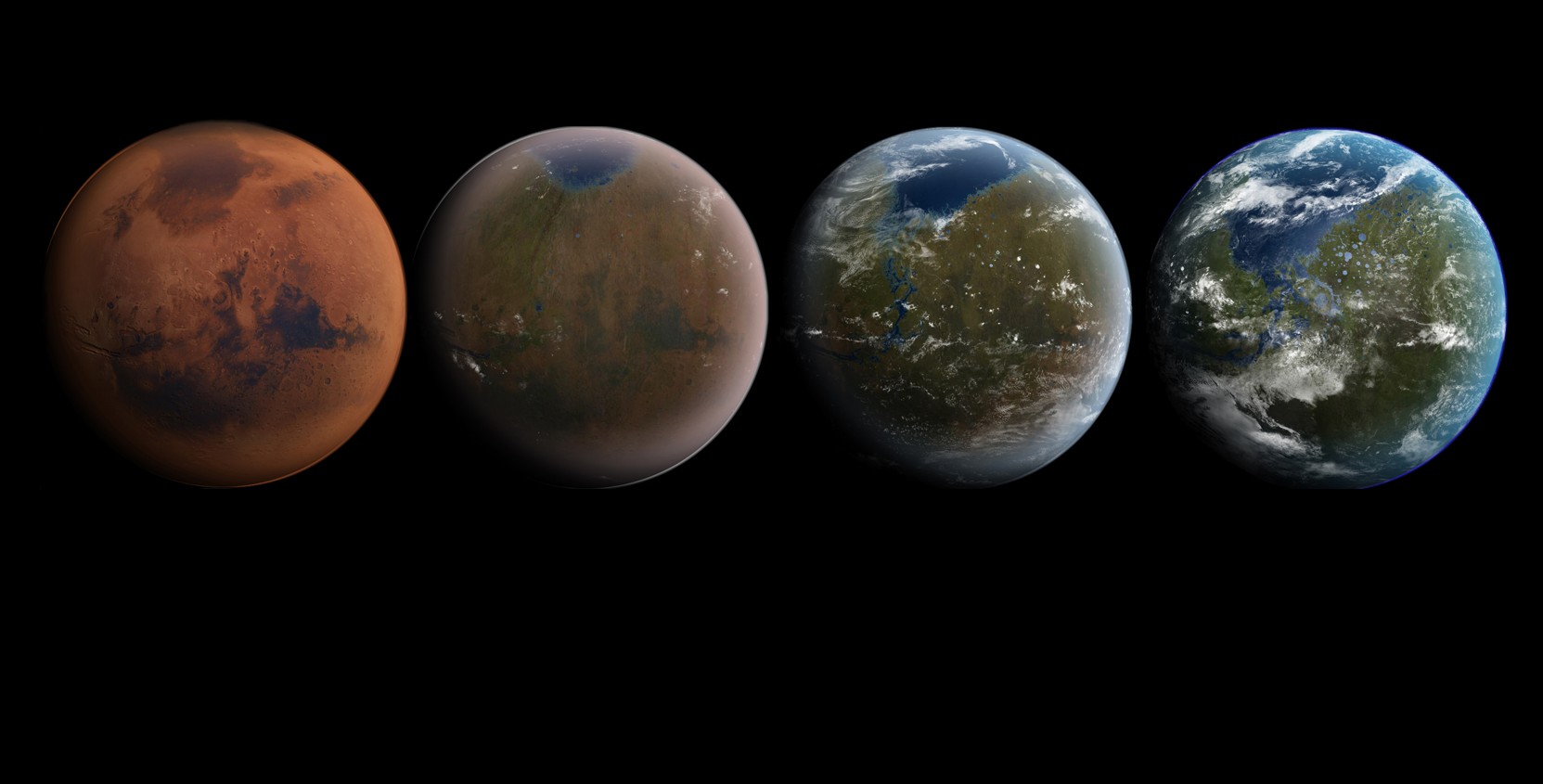 Elon Musk’s plans to terraform Mars: Who knew clean energy could be so controversial?

I have to admit, I’ve been pretty fascinated with the idea of terraforming Mars ever since seeing an IMAX film discussing the topic during my week at Space Camp, um, a few years back…or so. While I’m more interested in permanent space colonies (e.g., Star Trek: Deep Space Nine), I’m also very interested in multiplanetary habitation for humans, and transforming the Martian environment rather than constantly fighting to survive in it makes me keep an open mind to the idea.

That, and the fact that Elon Musk has a successful rocket company that was founded with long-term occupation of Mars as its core purpose are handy motivators. The t-shirts are are a great plus, too. The topic is now in the headlines again (with a brand new t-shirt to boot), and the players have taken up their usual places on the game board.

Musk has doubled down on his terraforming strategy, tweeting “Nuke Mars!” and then, “T-shirt soon.” He explained a little more a few days later in response to radiation concerns with, “Nuke Mars refers to a continuous stream of very low fallout nuclear fusion explosions above the atmosphere to create artificial suns. Much like our sun, this would not cause Mars to become radioactive.” Numerous articles were then written or referred back to in response, all arguing that the calculations for such a feat were either highly unlikely or near impossible as a viable terraforming solution. I won’t pretend to have a numbers-based opinion on the matter because, frankly, I always wondered whether it would even matter if it was possible.

Working through the politics of clean energy is hard enough when you’re just talking about converting to battery-electric vehicles like what Tesla makes to reduce the use of fossil fuels. Then, when you include nuclear energy into the mix as a zero emissions option, the fights really break out thanks to the awful consequences that came from nuclear plant failures of the past and the long-term impacts that nuclear weapons have caused in wartime. It doesn’t really matter if the science says it’s pretty safe with current technology – fear of the consequences overtakes any data-driven discussion. So, when someone like Elon Musk says he wants to use a technology on Mars that struggles so much on Earth, it really feels like much ado about nothing because it will never get a green light in the first place let alone gather the resources needed to execute.

A different concept that seems to be a bit more acceptable to the science community involves reflective satellites. Musk floated this option in a tweet, saying “Might make sense to have thousands of solar reflector satellites 🛰 to warm Mars vs artificial suns (tbd).” Since SpaceX is already in the business of manufacturing satellites at the scale that would be needed for such an undertaking with Starlink, the feasibility factor has more points than the thousands of nuclear bombs needed for an artificial sun near Mars. And, hey! Solar power (amplification) for the win, right?

However, I’m not sure whether NASA would acknowledge this strategy, either, since they’ve basically already scrubbed terraforming as an option in their opinion. A study released by the agency in July 2018 was pretty clear in its conclusions:

“Mars does not retain enough carbon dioxide that could practically be put back into the atmosphere to warm Mars, according to a new NASA-sponsored study. Transforming the inhospitable Martian environment into a place astronauts could explore without life support is not possible without technology well beyond today’s capabilities.” – Bill Steigerwald / Nancy Jones for NASA Goddard Space Flight Center.

Basically, neither nuclear energy nor solar power could terraform Mars according to everyone it seems, or at least it’s not feasible for a time frame that stretches the patience of most dreamers. Let’s pretend, though, that the science isn’t so fatalistic for a minute. After all, we don’t really know the nitty gritty details about Musk’s thought process and why he doesn’t think NASA is correct on this issue. Assume that NASA and everyone else says this is something totally possible and would do exactly what Musk et al. want it to do. Our next problems are human haters and planetary protection advocates.

There are a good number of people, or at least good number of very vocal people, that don’t think humans even deserve to colonize Mars. We’ve got enough problems to solve on Earth, they say to some effect. Even Kim Stanley Robinson, the author of the influential Martian terraforming trilogy with the titles of Red, Green, and Blue Mars, has said that Mars ‘isn’t a backup planet’ and that we need to fix our problems here before porting them to our red neighbor. I’m not saying Stanley hates humans, but rather pointing out that even someone with a grand vision for our species doesn’t think we currently have much business acting as another planet’s steward. This type of opposition can be infectious once the debate gets serious.

If you followed the story about Israel’s spacecraft crash landing on the Moon with some tardigrades aboard, you probably saw the raging debate that followed about polluting another planetary body. Honestly, I’d heard about concerns of spacecraft contamination that could interfere with the accuracy of, say, regolith analysis (how do we know what we found didn’t hitchhike from Earth, etc.), but nothing on the scale that followed the tardigrades. It reminded me a bit of an episode of Star Trek: The Next Generation (sorry for all the Trekkie references) where a terraforming team was greatly upset that they’d interfered with the environment of a crystalline, inorganic life form possessing intelligence. One crew person even shed tears over it despite one of her crew members being killed by the beings that were invisible to their equipment.

The whole outcry about the tardigrades came down to an anti-private space exploration mantra, really. Followers of Musk know how much flak comes from challenging the narrative in this arena, but SpaceX has finally made enough headway in terms of accomplishments to have overcome some of the biggest detractions. Not all of them, of course, but the victories thus far give hope for the future plans. Seeing that there was this rabid ‘Planetary Protection Police’ out there (way beyond basic science concerns) was kind of depressing. How many others will come out of the woodwork once SpaceX is actually ready to land on Mars? And with private citizens wanting to relocate there, no less?

The combination of all these things I’ve discussed kind of paints a bleak picture for ever getting off the planet and/or creating another home for humans to live on. I still have faith, though. Like fellow writer Eric Ralph suggested to me, perhaps it will all fall to the wayside once there are actual boots on the ground. The movie may already be in the works despite it all:

How I Learned to Stop Worrying and Love Martian Bombs.

Elon Musk’s plans to terraform Mars: Who knew clean energy could be so controversial?