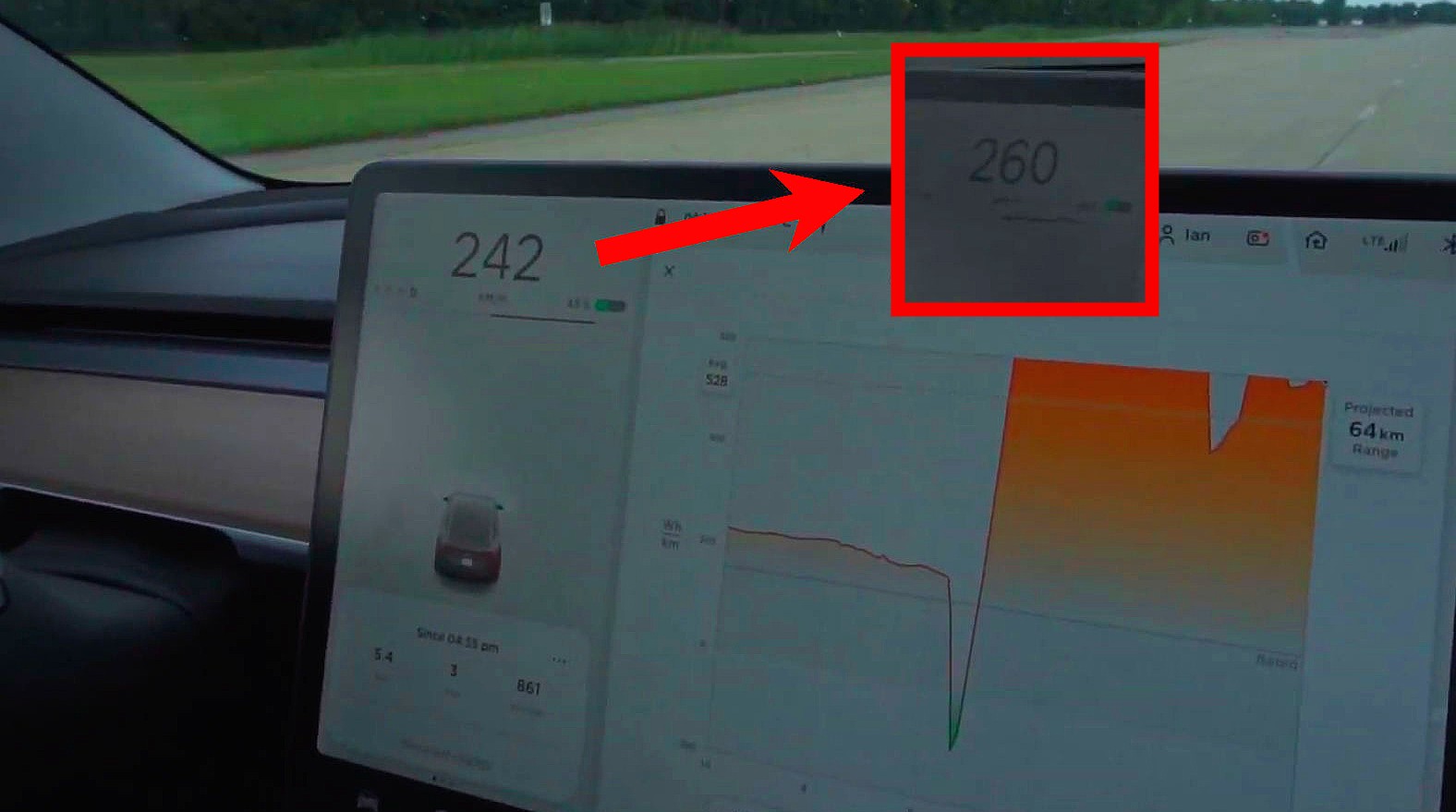 A few things are guaranteed in life: Death, taxes, and when the top speed of a Tesla gets an increase, there will be Tesla drivers seeking the opportunity to test it out.

During a visit to Transport Canada’s test facility and automotive research center in Blainville, Quebec, Ian Pavelko of XAutoWorld and Trevor Page of Tesla Owners Online had the opportunity to test a Model 3 Performance on the facility’s 4 mile-long (6.5 km) high speed track. Their result was successfully reaching 161.5 mph (260 km/h), nearly the rated maximum of the car’s 162 mph (261 km/h) before Ian opted to pull back on the throttle. The run started with 52% state-of-charge and used about 10% of the battery over the course of the test, according to Page.

The Model 3 Performance (along with all other Model 3 variants) received several firmware upgrades in February of this year, and one of the benefits was increasing its top speed from 155 mph (250 km/h) to 162 mph (261 km/h). The increase came alongside the announcement of the $35,000 Model 3 variant which has since taken a back seat to the Standard Range Plus with Partial Premium Interior as a ‘sweet spot’ of what Tesla customers typically order.

“We’d electronically limited the Model 3 Performance to 155 mph. That was not a physical limit but an electronic limit. After a lot of testing, we now feel we can increase that limit by 10 km/h or 7 mph, and that just ends up being an rpm increase in the motors. The two motors just spin faster. I think they’re going somewhere along the lines of 19,000 rpm,” explained CEO Elon Musk during a call with the press following Tesla’s announcement of the $35,000 Model 3.

Transport Canada’s test facility has 15 miles (25 km) of test tracks, including a low-speed oval, a high-speed oval, and a dirt road. “We can reproduce any surface condition such as rain, snow, ice and off-road depending on the season,” the facility’s website states. The area is run by PMG technologies and is dedicated to testing and researching all areas of transport, not simply race track performance.

Pavelko and Page’s high speed track rental for their runs, which included tire testing, reportedly cost around $1200 for a half-day session. Aside from nearly achieving the 162 mph top speed in their vehicle (Pavelko’s Model 3 named Magneto), some further knowledge was gained about its track performance.

The Tesla Model 3 Performance is known for its track performance, and many owners put their vehicles to the test in private events either for competitive purposes or just for fun. One event just for Tesla owners called Tesla Corsa was created to give owners the opportunity to experience the all-electric performance benefits of their vehicles in a safe, controlled environment. Of course, various Tesla models also regularly make headlines crushing gas-powered lineups such as the BMW M3. Top Gear magazine’s May edition famously declared that “Electric Beats Petrol” as a result of their own track and performance tests of the BMW M3 vs. the Tesla Model 3 Performance.