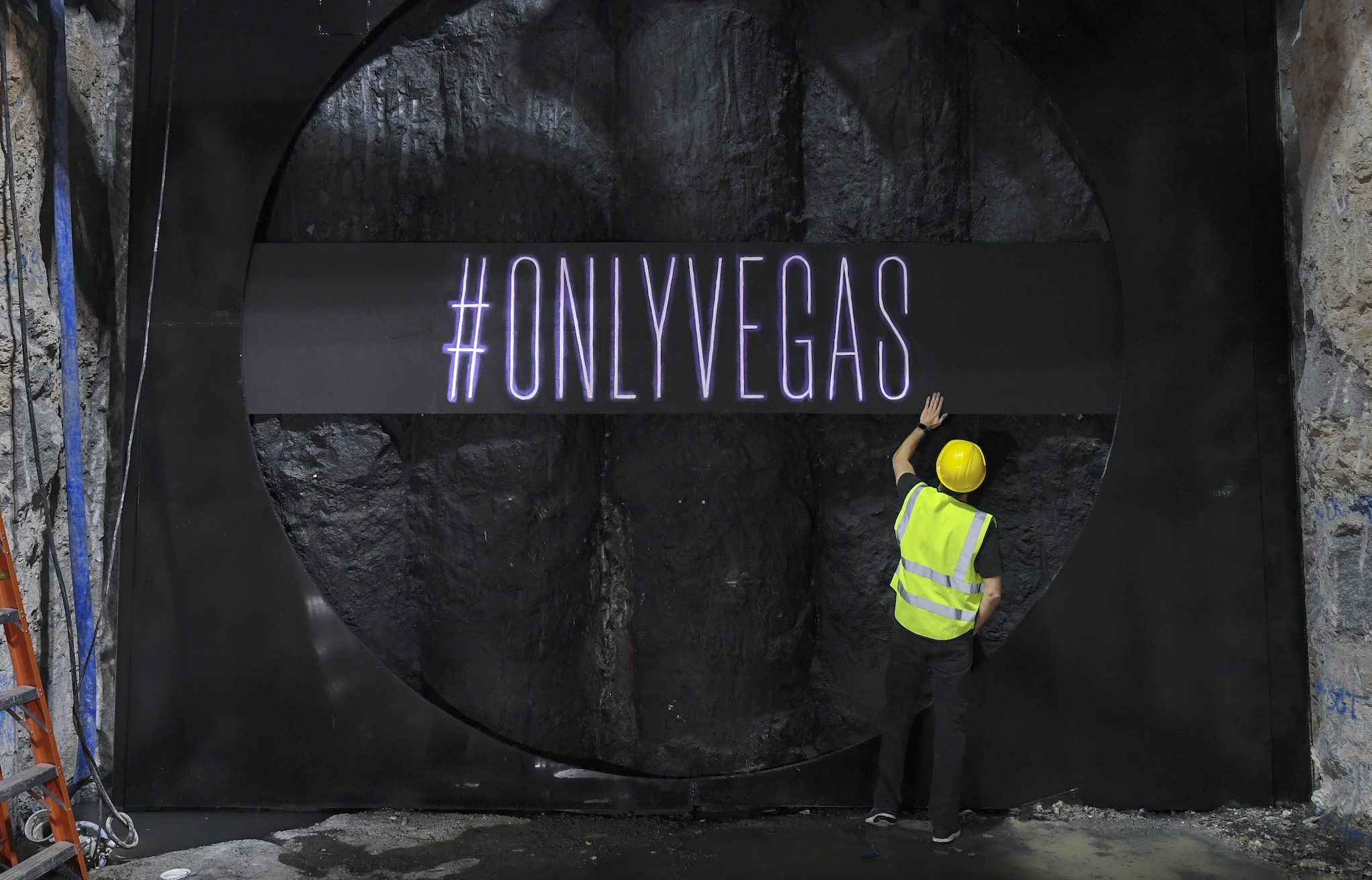 The boring machine broke through its target destination – a concrete wall located on the West Hall convention that’s currently under construction – in record time after tunneling nearly a mile since The Boring Company’s groundbreaking event in Las Vegas on November 15, 2019.

This would mark the first half of its high-speed transport system intended to shuttle convention attendees across the sprawling Las Vegas Convention campus in just over one minute, free of charge, in all-electric Tesla vehicles. Tesla’s goal is to complete the Las Vegas Convention Center’s loop system on time for the next year’s 2021 CES technology show.

Once the first tunnel is completed, the tunneling startup is expected to disassemble its TBM from the west end of the West Hall and moved back to the east end of the East Hall. Doing so completes the second tunnel, and it will mark the completion of the LVCC Loop’s transport line. After this, work will commence on fitting the tunnels to support The Boring Company’s transport pods, which will be ferrying passengers from one end of the LVCC to another. 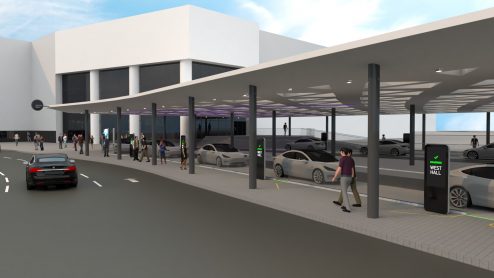 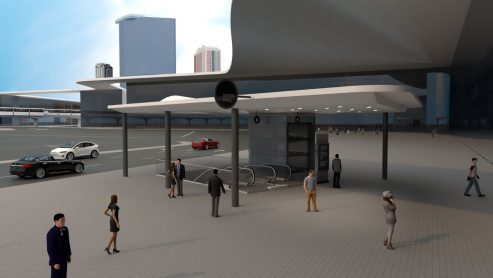 The Las Vegas transport tunnels will be the first mainstream project of The Boring Company. Prior to the LVCC Loop, the tunneling startup has only completed a proof-of-concept tunnel in Hawthorne, CA, which involved Tesla Model X SUVs ferrying passengers from one end of the line to another. The Las Vegas tunnel system is poised to utilize another type of vehicle to transport passengers. The line will reportedly be using autonomous vehicles that have enough room for up to 16 people.

While The Boring Company’s transport tunnel in Las Vegas is progressing well, the project is starting to become quite polarizing. In a statement to Inverse, Richard N. Velotta, a journalist who has been following the project’s progress, noted that public opinion has become very mixed today. “What I find most interesting is that those who are opposed are extremely opposed. Those who support are extremely supportive. No middle-of-the-road here,” he said.

Among the LVCC Loop’s critics is Mayor Carolyn Goodman, who argued that the Boring Company and its technology are largely untested, and therefore risky. Yet, it should be noted that the tunneling startup’s contract for the project includes stipulations ensuring that The Boring Company will be liable if the system does not operate as intended. On the other hand, the project also has a number of ardent supporters.

“There are huge supporters, both of the Boring system and Mr. Musk. They point out that Las Vegas, as a gambling city, has always taken big risks to capitalize on big rewards. This project is just such an instance,” said Velotta. 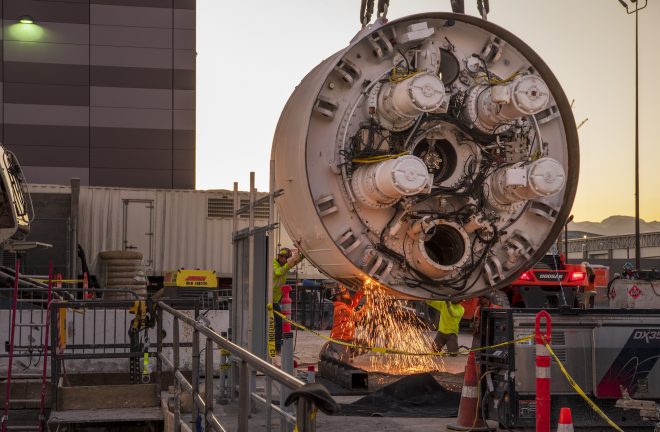 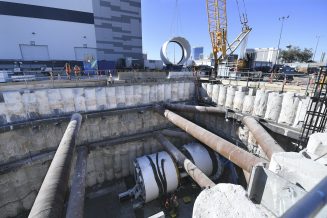 Workers from the Boring Company guide the third of three parts of the drill which will make the tunnel for the People Mover which will connect convention halls as part of the LVCCD Phase 2 construction in the Red Lot east of the south Hall at the Las Vegas Convention center Tuesday, October 29, 2019. (Sam Morris/Las Vegas News Bureau) 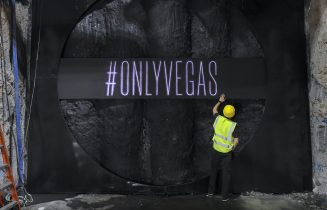 Ryan Rabbass works on painting the LVCVAís new slogan ì#onlyvegasî on the wall of a pit that The Boring Company drill will emerge from Wednesday, February 12, 2020, at the Las Vegas Convention Centerís new West Hall. (Sam Morris/Las Vegas News Bureau)

(Press release from the Las Vegas Convention and Visitors Authority)

LAS VEGAS – The Las Vegas Convention and Visitors Authority (LVCVA) today announced that excavation is complete in the first of two vehicular tunnels that will comprise TBC – The Boring Company d/b/a Vegas Loop underground transportation system located beneath the Las Vegas Convention Center campus. After tunneling forty feet underground for nearly a mile over the past three months, the boring machine hours ago broke through the concrete wall located near the 1.4 million square foot West Hall convention center expansion, currently under construction, signaling the official completion of excavation for the first of two one-way tunnels.

The Convention Center Loop was designed to serve as an innovative, fun and quick transportation solution to move thousands of convention attendees throughout the more than 200-acre campus with the potential for expansion in the near future to ease congestion throughout the Las Vegas resort corridor.

Next, the machine will be disassembled, transported via trucks and lowered back into the launch pit near the Convention Center’s South Hall where it will begin boring a parallel path adjacent to the first tunnel. The first commercial endeavor for the new tunneling company is designed to transport up to 4,400 convention attendees per hour and is scheduled to debut to the public in January 2021.

“This marks an important milestone in the future of transportation,” said Steve Hill, LVCVA CEO and president. “Las Vegas is proud to lead the way as the first and only destination to offer an underground transportation solution for moving visitors throughout our convention center.”

The $52.5 million underground transportation system will include three passenger stations connecting the existing 3.2 million square-foot of convention space with the convention center’s new West Hall, part of a $1.52 billion expansion and renovation. The system will allow convention attendees to be whisked across the sprawling campus in just over one minute, free of charge, in all-electric Tesla vehicles.