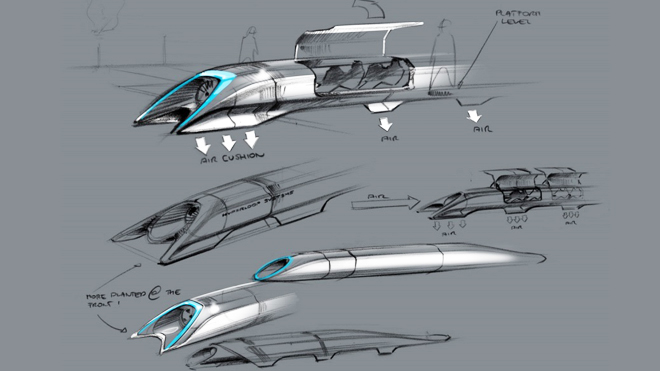 Like a giant silver bullet shot from a gun at up to 800 miles per hour, Elon Musk unveils Hyperloop plans which promises to transport people (and cars) across California faster than bullet trains — and at a fraction of the cost.

, to media hoopla worthy of the Segway’s introduction, after teasing the idea of a magnetically propelled something-or-other for the past year

Called Hyperloop, it would entail sleek pods that travel within low-pressure tubes that are nearly airless. The pods would hover on a cushion of air, floating above thin skis of a custom metal alloy; air sucked in from an intake in front of the pod would be compressed and ejected beneath to levitate it above the metal sleeve of its tube. Electromagnets would zap the craft forward at high speeds — some would say “ludicrous speed,” in the words of the classic film “Spaceballs.”

“At first I thought, yeah, this is the craziest thing I’ve ever heard of,” Oster, the CEO of California company ET3

He was talking of the general concept of magnetic levitation, yet that and Musk’s ideas are not all that far fetched after all. Indeed, Oster’s company is already hard at work making a similar concept work.

Musk is the uber-brainy genius who invented PayPal, privatized outer space through SpaceX and finally made electric cars a commercial force through his company Tesla Motors. In a blog post at the car company’s website

, he detailed the concept — after a long night spent dotting I’s and crossing T’s.

It was born from frustration at his state’s plan to build a bullet train that he called one of the most expensive per mile and one of the slowest in the world.

“It would be great to have an alternative to flying or driving, but obviously only if it is actually better than flying or driving,” Musk wrote. The Hyperloop concept is that option, he said, a fifth mode of transportation after planes, trains and automobiles (and boats).

, which explores the entire concept, from concrete pylons to the solar panels that would power the system. He’s even pinned down the number of passengers per pod (28) and the estimated cost of a one-way ticket ($20 — not bad). Indeed, Musk envisions a system that would be somewhat self-sustaining.

“The Hyperloop can generate far in excess of the energy needed to operate,” he wrote, thanks to solar panels lining the top of the steel tube.

Oh, and one more thing: There’s no sonic boom with Hyperloop. According to “Businessweek,” which interviewed Musk ahead of his announcement, the pods could in theory travel at high speeds without breaking the sound barrier.

“The pod can go just below the speed of sound relative to the air,” Musk said.

After all the hype, however, Hyperloop is still just hot air. Musk has publicly stated that he is too busy to explore the concept himself, instead releasing the idea into the public domain to see what others will do with it. It’s up to Oster and others to turn the idea into reality.

And for his part, Oster believes “maglev” transportation is very much real.