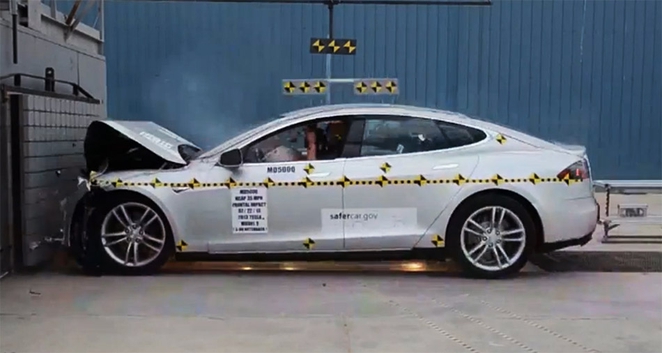 As crash-test boasts go, Tesla is claiming a good one: The roof of its Model S electric sedan is apparently so strong that it broke a testing machine during its independent validation of its government crash-test scores.

Roof-crush strength was just one of the reasons that Tesla says its electric car just came up with a five-star rating in National Highway Traffic Safety Administration testing.

Actually, in its press release Tesla claimed “a new combined record of 5.4 stars,” but there actually is no such government rating. The company said it figured that based on the complicated underlying data and calculations that go into the star ratings and are provided to the individual automakers.

But five stars is NHTSA’s top rating and NHTSA issued this statement on the Tesla release without further comment: “The National Highway Traffic Safety Administration is committed to improving safety on the nation’s roadways. The agency’s 5-Star Safety Ratings program is designed to provide consumers with information about the crash protection and rollover safety of new vehicles beyond what is required by Federal standards. One star is the lowest rating; five stars is the highest. More stars equal safer cars. NHTSA does not rate vehicles beyond 5 stars and does not rank or order vehicles within the starred categories.”

Still, while other plug-in electric models have overall five-star ratings, Tesla’s getting a perfect five stars in each of the three test areas that go into the overall rating is relatively rare.

Analysts sound impressed. “Clearly, (Tesla CEO) Elon Musk knows this is how an all-new type of car from an all-new automaker changes minds and wins over skeptics,” says Karl Brauer of Kelley Blue Book. “If they can continue to establish new standards in areas like in-car technology and occupant protection … they are destined to become a fully validated car company.”

Tesla says the car’s electric powerplant was an advantage. The car can be designed with a longer, energy-absorbing “crumple zone” in front due to no gasoline motor up front. Instead, it has storage in front, with the batteries packed underneath and the electric motors in the rear.

Tesla says it also is taking extra precautions for rear-crash safety, which is not in the NHTSA test battery but will be tested at a later date by the Insurance Institute for Highway Safety industry labs. The attention is because the Model S has an optional rear-facing third row of seats for children. Models with the third row get a double bumper.

Tesla says that when its independent lab’s testing press busted, the Model S roof was already withstanding a load of four times the car’s weight without failing.

Tesla says it avoided any specific strategies to gain better scores in the government tests. “After verifying through internal testing that the Model S would achieve a NHTSA five-star rating, Tesla then analyzed the Model S to determine the weakest points in the car and retested at those locations until the car achieved five stars no matter how the test equipment was configured.”