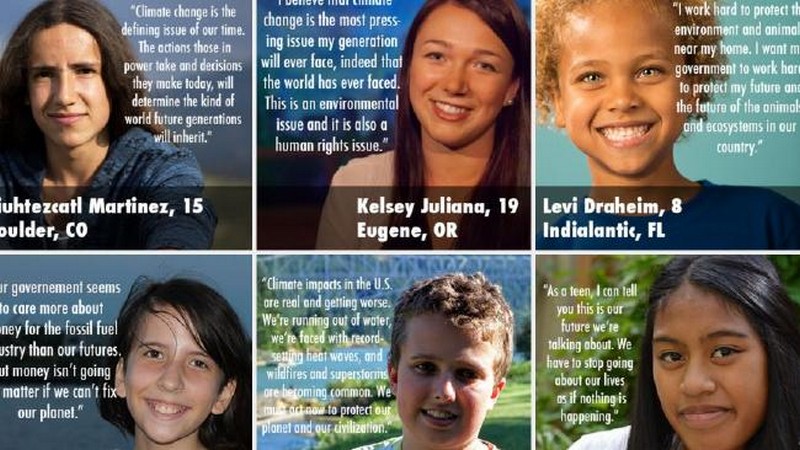 What does a federal climate change law suit brought by young people against the United States government have to do with Elon Musk and Tesla Motors? On the surface, the answer is nothing. But dig a little deeper and you will see these kids are promoting the same philosophy that drives Tesla — a desire to rid the world of the scourge of fossil fuels. 21 young people between the ages of 8 and 19 have sued the federal government for failing to protect them from the dangers of climate change. Photo credit: The Guardian

The plaintiffs in the suit are 21 young people ranging in age from 8 to 19. They are joined by climate activist Dr. James Hansen. The suit claims the federal government is violating their rights as guaranteed by the Constitution to life, liberty, and property. It says the government is permitting, encouraging, and otherwise enabling continued exploitation, production, and combustion of fossil fuels.

Lawyers for various fossil fuel interests filed motions to dismiss the suit on several technical grounds. They claim the plaintiffs have not suffered any harm personally. They also claim the suit raises political questions that are not the proper province of the courts.

On April 8, U.S. Magistrate Judge Thomas Coffin of the federal District Court in Eugene, Oregon denied the defense motions and ruled that the suit, Juliana vs. United States, may proceed. He characterized the case as an “unprecedented lawsuit” addressing “government action and inaction” resulting “in carbon pollution of the atmosphere, climate destabilization, and ocean acidification.”

In his decision, Judge Coffin wrote: “The debate about climate change and its impact has been before various political bodies for some time now. Plaintiffs give this debate justiciability by asserting harms that befall or will befall them personally and to a greater extent than older segments of society.”

The judge continued, “It may be that eventually the alleged harms, assuming the correctness of plaintiffs’ analysis of the impacts of global climate change, will befall all of us. But the intractability of the debates before Congress and state legislatures and the alleged valuing of short term economic interest despite the cost to human life, necessitates a need for the courts to evaluate the constitutional parameters of the action or inaction taken by the government. This is especially true when such harms have an alleged disparate impact on a discrete class of society.”

Plaintiffs’ attorney Philip Gregory tells the press, “This decision is one of the most significant in our nation’s history. The Court upheld our claims that the federal government intensified the danger to our plaintiffs’ lives, liberty and property. Judge Coffin decided our complaint will move forward and put climate science squarely in front of the federal courts. The next step is for the Court to order our government to cease jeopardizing the climate system for present and future generations. The Court gave America’s youth a fair opportunity to be heard.”

This is only a preliminary step in what could be a long and torturous legal process that eventually could wind up before the US Supreme Court. Rest assured that the fossil fuel industry and the conservative groups they underwrite will marshal their enormous resources to fight the case every step of the way.

The suit is not without precedent, however.  A legal action in the Netherlands last year got the court to order the government to cut emissions more quickly. A lawsuit against the state of Washington in 2011 resulted in the state government being ordered to re-examine its plans to reduce greenhouse gas emissions. Eventually Governor Jay Inslee directed regulators to cap emissions and curb them by 50 per cent by 2050.

When we compare the remarks Elon Musk made at the COP21 conference in Paris last December with the claims made by these young plaintiffs, it is clear they are closely aligned. Perhaps America needs to pay more attention to its children and less time listening to the climate deniers in Congress who are willing to sell out their constituents for 30 pieces of silver.