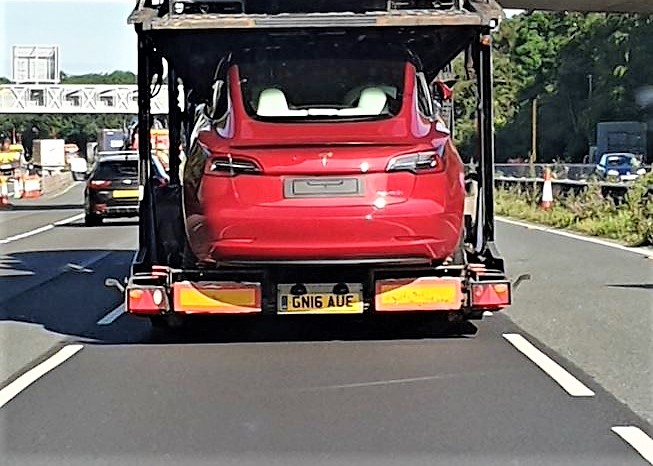 If recent sightings are any indication, Tesla Model 3 right-hand drive (RHD) variants will soon be in the hands of anxiously awaiting customers in the UK.

Further evidence that the Model 3 cargo en route to London is intended for customers, not simply show rooms for test drives, comes in the form of text messages from Tesla that several local customers have reported receiving. As revealed on Tesla Motors Club (TMC), the messages read as follows:

“Congratulations, you will be among the first to take delivery of Model 3 in the UK. Your delivery is scheduled for 20/6 14:00 in London, Heathrow. We will contact you shortly to confirm the final details. Please log in towww.tesla.com/teslaaccount to complete your delivery profile as soon as possible.”

If the Model 3 cargo in the recent photos isn’t intended for initial customer deliveries after all, several shipments are reportedly arriving in the UK soon specifically for the purpose. One reservation holder and TMC member detailed a call received from Tesla which provided upcoming shipment information. Specifically, out of 1,000 cars on the cargo ship Grand Mark, 150 of them are Model 3 RHD set for delivery at the end of June. Grand Mark is estimated to arrive in the Port of Zeebrugge, Belgium on June 19th, according to MarineTraffic.com. Following that shiment are two other ships with 2,000 RHD cars each set for deliveries in July and August, per the call from Tesla.

Tesla also reportedly shared certain criteria the company is using to determine the order in which customers will take delivery. First is customers’ place in the order queue, second are the specifications of the cars as ordered (assumingly the more popular/standard packages will be first), and third, the detail completion on customer account pages.

Tesla originally debuted the Model 3 (left-hand-drive) in the UK in July 2018 at the Goodwood Festival of Speed, making impending RHD deliveries a long time coming for prospective customers. An RHD variant was first spotted on a California highway near Tesla’s Fremont factory back in March, which was shortly after VINs identifying that particular driving position indicated the cars had been recently built. The Model 3 online configurator for UK customers opened on May 1, as promised by CEO Elon Musk.

Delivery logistics will obviously be the next challenge for Tesla since large shipments to the UK are now underway. The experience the all-electric car maker has gained over the last few months, especially in China where Tesla’s service teams were working around the clock to deliver vehicles, will hopefully ensure a fairly smooth hand over process for all RHD customers.