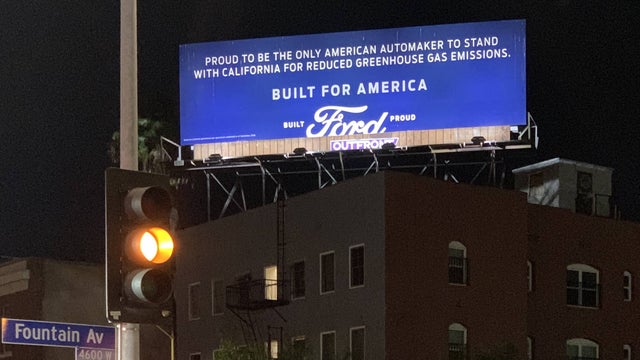 Ford’s EV initiative has barely gotten off of the ground, but it still hasn’t stopped the American automaker from casting stones in the direction of Tesla. A billboard posting in Hollywood, California from Ford implies that it is the only American car company to support the State’s strict emissions regulations, which is simply untrue. Tesla is perhaps the biggest supporter, considering their entire vehicle lineup is all-electric, but Ford is unwilling to acknowledge the EV leader’s role in the transition to electrification.

The billboard is available near Fountain Avenue, which runs from Los Feliz all the way to West Hollywood. While virtually all areas of Los Angeles are considered “high traffic,” this billboard’s location runs through the heart of the city’s touristy-region in Hollywood. A photograph of the sign was spotted and posted to the Tesla Motors Club forum by user feigen66. It reads, “Proud to be the only American Automaker to stand with California for reduced greenhouse gas emissions,” with a sizeable Ford logo placed underneath the caption.

Ford’s self-recognition as the sole American automaker to stand with California’s greenhouse gas standards is a case of the company ignoring Tesla’s dominating presence in the Golden State. Humorously, Tesla is based in the state where Ford’s satirical billboard is placed, making the statement more comedic than it is at face value.

The fact is, Ford is not the only American car company to support California’s emissions regulations. Tesla has been benefitting from supporting the State’s environmental plan for over a year. Last November, California announced that it would no longer purchase cars from General Motors, Toyota, or Fiat Chrysler because the companies did not agree to abide by the state’s rules regarding vehicle emissions.

Instead, companies that openly supported California’s greenhouse emissions policies would receive the State’s support. This would open the door for companies like Tesla to have their vehicles purchased by the State, but Ford is still suggesting that it is the only car company to side with California.

But to many people’s surprise, this is not the first time Ford has given Tesla the cold shoulder. The American company, based in Dearborn, Michigan, made the same statement in September 2020. Jim Farley, Ford’s current CEO, Tweeted the same message just two months ago, failing to acknowledge Tesla’s existence in an attempt to win over the politicians of California.

While supportive of the transition to EVs, Ford still has not released a fully-electric car as of now. However, the company’s Mustang Mach-E will be released before the end of the year, introducing the public to the first all-electric car in Ford’s storied history as a carmaker. With that being said, the company’s non-acknowledgment of Tesla is questionable. With Tesla being the undisputed leader in electric vehicle production, credit should be given where it is due.

While car companies are undoubtedly competing with one another to sell the most vehicles, adopting all-electric vehicles is somewhat of a team effort. Tesla should receive the recognition it deserves for bringing top-performing EVs to the market and also highlighting the importance of transitioning away from petrol-powered engines.