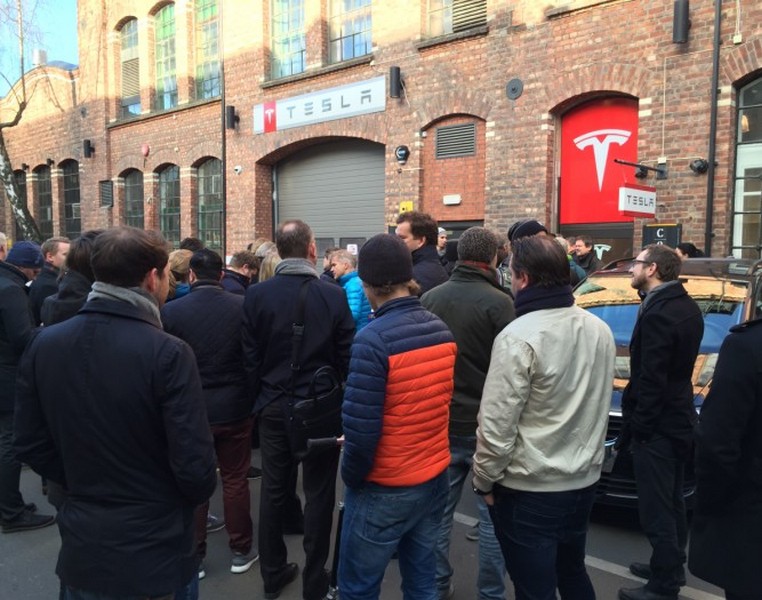 People are lining up at Tesla stores all around the world to make their reservations for a Model 3. Will Tesla get 100,000 orders today? Maybe not, but it is still going to be a very, very good day for the company.

Remember Andreas Stephens? He’s the fellow in Australia who wanted to be first in line to place a Model 3 reservation at his Tesla store in Sydney. With 48 hours to go until the story opened, he looked very lonely out there by himself. He’s not lonely any more. Here’s a picture outside the same story tweeted by Elon Musk late yesterday.

Tesla stores around the world are reporting large numbers of people waiting in line to make their Model 3 reservations. Across much of social media – from reddit, to Twitter (#Model3), to Facebook – widespread reports of  300+ people in line before store openings – are spotted everywhere. Teslarati reader Leif Hansen sent us this photo of people queuing up outside the store in Oslo. He reports his local store in Bergen expects to take 250 reservations today. It’s the same story in Zurich. The line of people in Montreal is huge, even though its raining there. A few days ago, there was speculation that Tesla might receive as many as 100,000 reservations world wide in the first 24 hours. Skeptics hooted that such predictions were preposterous. Looking at the photos we have so far, it seems like Tesla is going to get plenty of them. Whether they amount to 100,000 or not is more or less irrelevant. As Elon tweeted on Tuesday,

Looks like we may need to increase production plans for the Model 3 pic.twitter.com/fmCPFC9FEm